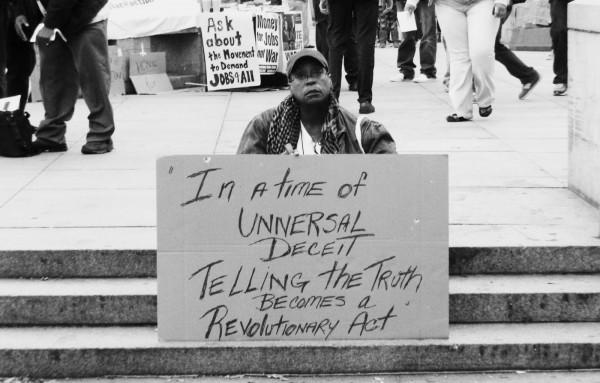 In the last week there were two high profile events that highlighted the inability of those in power to reflect reality and put forward solutions to the urgent problems faced by the United States and the world: the State of the Union and the World Economic Forum at Davos.

In Black Agenda Report, Glen Ford called the State of the Union “a festival of lies.”  Margaret Kimberly wrote, the annual event “is used to masquerade drivel as accomplishment and reinforce the notion that a collapsing society is a thriving democracy.” Americans seem tired with this annual show as it had the lowest number of viewers since 2000.

Political comedian Lee Camp described President Obama as “Out Orwelling Orwell” from his false rosy picture of the economy to saying that fracked gas is good for the environment to his glorification of war; Obama’s State of the Union presented a false reality.

Seven members of the Green Shadow Cabinet wrote responses to the State of the Union.  Ben Manski described the speech as one that could have been “given by a robot, or an actor, or a media spokesperson.” They criticized the fraudulent peace process in Syria which seemed more designed to lay the groundwork for war. Ajamu Baraka called it an “Orwellian subterfuge.”  Jackie Cabasso exposed the hypocrisy of our ten year trillion dollar commitment to upgrading U.S. nuclear weapons while opposing the (non-existent) threat of Iran developing a bomb.

Economist Jack Rasmus pointed out that President Obama and his allies have finally discovered income inequality. Of course, most of us have been acutely aware of it for decades. The wealth divide was a root cause of the revolt known as Occupy and 67% of Americans recently told Gallup they were dissatisfied with the way wealth is distributed. Kshama Sawant said in her response to Obama, during his presidency “poverty is at record-high numbers; 95% of the gains in productivity during the so-called recovery have gone to the top 1%. The president’s focus on income inequality was an admission of the failure of his policies.”

While President Obama acknowledged the wealth divide he failed to put forward policies that really address it. Political economist Gar Alperovitz describes the real state of the economy as “long-term stagnation and decay.” When that reality is faced, then totally different solutions are needed, solutions that would really challenge the present system of big finance capitalism.

The one real policy change President Obama put forward was to raise the pay of low wage workers under federal contracts. The federal government is the biggest employer of poverty workers. President Obama promised a $10.10 minimum wage.  Workers won this concession through a series of one-day strikes that targeted Obama. This promise sounds even less impressive when you get to the details. The change only affects new contracts. So, instead of two million workers getting an immediate raise, only 200,000 will.

Sam Smith of Progressive Review puts forward what a State of the Union would look like if the people ruled.  He looks at current polls and finds supermajorities of Americans would favor a very different direction for the economy and government. The people put job creation as the top priority.

The Davos Class: People Who Destroyed the Economy

The heinous wealth divide was highlighted by an Oxfam report that found: “The world’s 85 wealthiest people have as much money as the 3.5 billion poorest people on the planet – half the Earth’s population.” This forced the issue onto the agenda of the world’s wealthiest when they attended the World Economic Forum in Davos

Alex Jensen, an expert on globalization and development at the International Society for Ecology and Culture urged all of us to not fall for the “glossy veneer” of Davos but recognize it is a stage “for multinational corporations, among them human rights abusers, political racketeers, property thieves and international environmental criminals.” These are not people who deserve applause but deserve “fierce resistance” as they are the cause of the economic and environmental problems the world faces.

The Transnational Institute, in conjunction with Occupy.com, issued a report “State of Power 2014” that found less than 1% of corporations control 40% of global business and that 37 of the world’s largest economies are not countries, but corporations. The “’Davos class,’” has caused financial, economic, social and ecological crises worldwide” and we must “know which elites control our wealth and resources and understand how they influence political and social processes” so we there can be “a recalibration of power.”

Not discussed at Davos was what Jerome Roos of the radical movement publication Roar Magazine describes as the “emerging market bloodbath.”  He pointed to the collapse of Argentine peso and Turkish lira, the Russian ruble and South Africa’s rand taking a nosedive to their lowest levels since 2008, and the Brazilian real falling to its lowest levels in five months, compounded by Chinese slump, the shrinking of the U.S. Federal Reserve’s Qualitative Easing program and pressures on other markets around the world. All of these point to a new phase of the economic crisis, rather than the crisis coming to an end as the Davos-types like to tell us.

The political and economic elites are putting forth the same policies that contributed to the economic collapse. The top global example of this is the continued push for rigged corporate trade agreements.  Public Citizen points out that research has shown that falsely called “free trade” deals have been a major cause of wealth inequality by pushing down wages and providing access to cheap resources which make the wealthiest wealthier.  More rigged corporate trade will actually expand the wealth divide, not shrink it.

It is not only the facts President Obama and global trade activists ignore but the politics. The president’s political base has come out to protest controversial corporate trade agreements like the Trans-Pacific Partnership (TPP). And now there is opposition in the Republican activist base as well that is calling it ObamaTrade. As we write this, we are ending a ten day campaign to stop fast track for the TPP that culminated in an intercontinental day of action.

The story of the TPP and the effort to pass Fast Track Trade Promotion Authority is also one which illustrates why the power structure fears the people. Politicians and the corporate media did their best to keep people ignorant about the TPP. For the first two years of negotiations by President Obama they were effective, but in the last two years there has been a rising tide of awareness and opposition. Numerous articles have exposed the TPP in the independent media and Wikileaks leaked sections of the secret agreement. Now, a ‘movement of movements’ has come together to oppose fast track. This can be seen on the website www.StopFastTrack.org where 130 organizations have joined together in a focused effort.

The result – the people are defeating transnational corporations and their lackeys in elected office. The success is quite amazing as the TPP seemed unstoppable less than a year ago. But, with awareness came mobilization. Unless something changes dramatically, fast track – and the TPP look dead for now.

What does this TPP experience show?  First, the government tried to deceive the people because they knew if the people became aware and mobilized the treaty could not become law. Second, the people need to recognize we have tremendous power.  We can stop something the wealthiest corporations in the world want.  Third, people working on individual issues need to work together in a ‘movement of movements’ that supports each other and builds a mass movement that cannot be ignored. Finally, we need to be persistent because transnational corporate power will not give up. It will try again, and we need to be organized to stop them.

What you can do to challenge corporate rule

There is always a disparity between what we are told by the government and corporate media; and reality. Our job is to understand and project reality by becoming the media. An easy way to stay aware is to visit Popular Resistance and sign up for our daily news digest. This will provide you with tools that make it easy to keep your family, friends, colleagues and community informed.  If you want to do more, write about the realities you see around you or video stories and share those, comment on articles that present a false narrative and write letters to the editor. By doing any of this you are becoming a member of the new citizen’s media that will overtake the corporate media.

If you are in the government or work for big corporate interests, you have a special opportunity. Those in power greatly fear people who leak documents that show the truth beyond any doubt. It has become safe to leak while remaining anonymous thanks to outlets like Wikileaks. The reaction to Snowden’s leaks show the power one person who tells the truth can have in a nation dominated by lies.

Another task is to mobilize. Talk to people in your community. Develop a core group of people to work with or join existing groups that are working on issues you care about. Understand the goals and strategy for success that has been developed. We can succeed and we know from past movements how to do so.

Just in the last week we have seen how people who make a difference are feared.  In Pennsylvania, Vera Scroggins, an anti-fracking activist, was barred from 312.5 sq miles under a sweeping court order granted by a local judge. It bars her from any properties owned or leased by one of the biggest drillers in Pennsylvania, Cabot Oil & Gas Corporation. They barred her even though she has never been arrested, mainly because she has published hundreds of videos showing the truth about fracking and its impacts.

And, in Wisconsin 1,200 acres of land was closed to the public by the state’s Department of Natural Resources to allow mining to go forward without protests. Wisconsin calls the protesters “eco-terrorists” even though they have not done anything violent or threatened any people. What they did was to draw attention to a secret mining operation that is likely to cause serious environmental damage.

These economic and environmental problems are happening around the world. Just last week the UK government passed a gagging law to prohibit charities, NGO’s, bloggers, community groups and most attempts at organized opposition to the government in the year prior to a general election. This bizarre law shows how threatening democracy has become. How can you have an election if people are not allowed to criticize those in office?

Chris Hedges makes the point that we are like the crew of the Pequod in Moby Dick.  They are stuck in a suicidal chase for the great white whale, Moby Dick, led by an insane Captain Ahab:

“Yet we, like Ahab and his crew, rationalize our collective madness. All calls for prudence, for halting the march toward economic, political and environmental catastrophe, for sane limits on carbon emissions, are ignored or ridiculed. Even with the flashing red lights before us, the increased droughts, rapid melting of glaciers and Arctic ice, monster tornadoes, vast hurricanes, crop failures, floods, raging wildfires and soaring temperatures, we bow slavishly before hedonism and greed and the enticing illusion of limitless power, intelligence and prowess.”

Can we mutiny as Ahab’s crew should have done before they came to their destruction?  Our mutiny begins with resistance which at its root begins with understanding and sharing the truth around us. We cannot let the misleaders falsify reality for their own purposes. Our task is to break through, get the truth out and mobilize people so we avoid the fate of the Pequod.