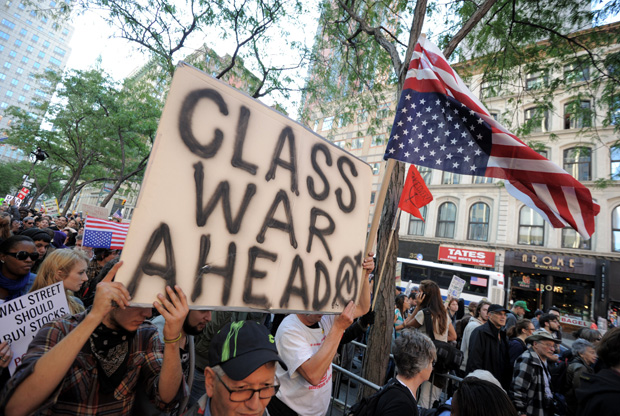 Popular Resistance Newsletter – We Are In A Class War

The struggle of working Americans takes center stage as Black Friday protests cover the country. The struggle for wages that do not leave families impoverished is one that affects us all and highlights the unfair economy created by a class war waged by the wealthy for decades. The ‘Walmartization’ of the US economy has created a downward spiral in wages and destroyed small businesses and communities while heightening the wealth divide that is at the root of so many problems.

The people are fighting back and the elites recognize it. There is fear in the investor class as they see people organizing and mobilizing. Corporations are now investing more time and money in preparation to protect themselves from investor actions and legal challenges. The actions of corporations and governments against the people are a sign of their fear, and a sign of our unrealized strength.

Noam Chomsky writes in his new book, Occupy: Class War, Rebellion and Solidarity, that the “business class” is always engaged in class warfare. They continually act to protect their interests, wealth and power. The class war manifests itself in every aspect of our lives from the attack on our public institutions and civil liberties to climate change and the global race to the bottom and racially unfair police enforcement and mass incarceration.

Active Fronts of Struggle in the Class War

There are many active fronts of struggle. In last week’s report we emphasized the bold and creative protests against climate change, extreme energy extraction and toxicity in our environment. This week we focus on another critical front, worker rights and wages; and highlight the necessity for persistence, solidarity and transformation.

Henry Giroux recently spoke with Bill Moyers about his book Zombie Politics and Culture in the Age of Casino Capitalism. Giroux said, “The real changes are going to come in creating movements that are longstanding, that are organized, that basically take questions of governance and policy seriously and begin to spread out and become international.”

An area in which this is happening to a great extent is in global trade. The World Trade Organization (WTO) will meet in Bali, Indonesia on December 3. Ever since the Seattle protests in 1999, the WTO has been unable to move forward on their agenda. This week WTO Director General Roberto Azevedo announced they were unable to move forward once again.

We are on the cusp of a new era of fair trade instead of rigged corporate trade. Our tasks are to stop the Trans-Pacific Partnership (TPP) which is reaching completion and the new Trans-Atlantic Trade and Investment Partnership (TAFTA) from being signed into law and then go on the offense to demand a trade process that is inclusive, democratic and transparent.  Protests were held every day last week in Salt Lake City where the TPP negotiators were meeting and 250 showed up to protest the TPP in Beverly Hills at a high dollar fundraiser featuring President Obama, Majority Leader Reid, and Minority Leader Pelosi.

We can keep building momentum on Tuesday, December 3, a day of international protests against toxic trade agreements and for a new era of trade that puts people and the planet before profits. The Flush the TPP campaign signed on to the December 3 day of action and protests will be held in cities from Hawaii to New York. We will deliver a petition to the Office of the US Trade Representative in Washington, DC. telling them to stop their bullying.  Sign that petition here and join us if you can.

The TPP is an example of a phenomenal corporate power grab that will accelerate the global race to the bottom in wages and worker safety as well as in protection of the environment and human rights and public health. Walmart is one of the corporations that is really pushing the TPP so that it can move its factories into countries like Vietnam where the minimum wage is $0.36 per hour. Stopping the TPP would be a victory against Walmart and all transnational corporations.

Workers and Communities Unite Against Walmart

Why are the Black Friday mass protests against Walmart important? We can think of no other corporation that has caused as much damage to the working class, communities and the overall economy as Walmart. The six Walton heirs have more wealth than the bottom 40 percent of Americans. Walmart is the largest private employer in the world and has extensive supply lines.

The Walton family wealth has come at a tremendous price for the rest of us. They’ve gained this wealth by squashing worker rights, lowering wages and draining our local tax dollars, and they show no signs of changing course. After the disastrous collapse of the factory in Bangladesh which killed over 1,000 workers, many companies signed on to a new accord to prevent it from happening again. Walmart, along with GAP, refuses to sign the accord.

Walmart’s low price guarantee has effectively made them into a monopoly that forces their suppliers to fire workers and move overseas to drive down costs. Walmart is such a behemoth that it has no competitor in the world. And despite massive profits, each Walmart employee requires around $2,000.00 per year in public assistance for health care and food stamps. That doesn’t include taxpayer investment in infrastructure for Walmart stores and corporate tax breaks. This year, Walmart went so far as to request food donations for their own poverty-wage employees’ Thanksgiving meals.

In addition, as Walmarts have popped up across the country, they have left a path of destruction to small businesses and have ravaged communities. Local businesses simply can’t compete with Walmart’s prices. And Walmart sucks local dollars out of state to the corporate headquarters in Arkansas. There is a very high cost to Walmart’s’ low prices. Local politicians who do not stop Walmart from coming to their city are doing a public disservice.

Over the past few years, Walmart workers have been fighting back through the organization OUR Walmart and their For Respect Campaign. They’ve staged strikes at stores and warehouses, rallies at the Walmart headquarters and this year they escalated to road blockades and mass arrests. Workers are speaking out and telling their stories. This Black Friday, protests at 1500 stores have been organized and community members are standing in solidarity with the workers. Here are tools that protesters can use to educate and increase the pressure by “rebranding” Walmart with the truth.

Walmart could easily provide a living wage. A recent study by Demos shows it would even be in their best interest to do so because it would stimulate the whole economy. And there are signs that Walmart is feeling the heat. The CEO, Michael Duke, announced this week that he will step down. And Walmart hired a public relations firm to smear Walmart protesters. Our sense is that this effort will backfire as it shows the desperation of this Goliath that will fall to mobilized Davids.We hope that you will support the Walmart workers and press for real transformation. Imagine what a better place the world would be if Walmart began to pay workers at a living wage and had to compensate communities for the damage it has done.

In fact, Walmart is not the only corporation that mistreats its workers; it’s just the largest one. Here is a list of ten American companies that pay the least. In addition to Walmart employees, other workers are fighting for a living wage. Fast food workers and those who make supplies for the fast food restaurants have also been holding strikes and rallies. Airport workers from Seattle to Minneapolis to New York are organizing for higher pay and winning in the case of Seattle.

The situation in Seattle is particularly noteworthy. Seattle just elected its first socialist at-large council member, Kshama Sawant.  Sawant recently urged local workers to resist Boeing’s “economic terrorism” and threaten to take over the factories rather than make concessions to the company that has been squeezing the workers and the city. Boeing workers voted overwhelmingly to reject a contract that would hurt younger workers even though it puts hard won pay and benefits at risk. Sawant urged them to go further and take over the factories.

Persistence and Solidarity are Key Ingredients

Younger workers are in a tough position and it is great to see solidarity rising up. Graduate students in California showed solidarity this month by pledging to strike alongside campus workers. And after an eight year campaign that was supported by students, graduate students at New York University won a significant concession: they will vote in December on forming a union. Their goals are better pay and working conditions.

Other workers who need our solidarity are postal workers. The Postal Service is under a severe and unnecessary attack. In this video, Carl Gibson describes an idea that helps the Postal Service at the expense of large financial institutions by sending their pre-paid junk mail back to them.

Persistence and solidarity are key ingredients to social transformation. On December 2, the people of Bhopal will mark the 29th anniversary since the Dow Chemical disaster that has killed 25,000 so far and continues to cause harm. Though their struggle is ongoing, they have had some important victories for clean water, pensions for widows, environmental monitoring and more. They are asking for people to join them by holding actions at Dow Chemical offices.

In other news, the School of the Americas Watch held its yearly vigil at Fort Benning last weekend. They welcomed newcomers and held a Peoples Movement Assembly for the first time to discuss new strategies and nonviolent direct action tactics. And the Free Marissa Now Campaign just announced a major victory. Marissa Alexander was released from jail the night before Thanksgiving pending her next trial in March.

Mountain top removal activists are protesting in the West Virginia state capital. They are in Day 3 of “The Coal Dust Vigil,” highlighting how coal dust is killing people and making others ill in their community. And, in Connecticut, there have been spectacular protests against UBS bank for their financing of mountain top removal — banner drops, sit-ins, lock-downs and blockades. In California, this amazing teen is in her third week of a tree sit.

In addition to building a global movement, Giroux calls for a cultural transformation. We need to find places where people can connect to talk about the world they want to create and then strategize about how to make it a reality. We need to move outside of the constraints inherent in our current economic structure and use our collective wisdom and power to build new systems based on values that lift up communities and heal the planet.

Many are asking us what they can do. Connect with people in your community. One person suggested forming a Popular Resistance meet-up and others are joining struggles for workers, the environment, youth, to end war, end police abuse and so much more. When you get involved, you will find that your frustration at the mis-direction of our country lessens because you will see that you are not alone. Many are working for the transformation we know we need with persistence and in solidarity.