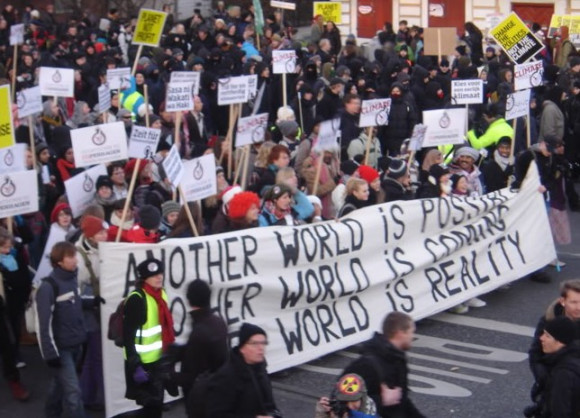 Popular Resistance Newsletter: We Believe That We Will Win

Before we go in depth on a few key issues of the week, we want to highlight one event which we found to be inspiring.

The Newark Student Union walked out of their classes for two days. On the first day they rallied at a park where they held classes on the history of student protests, a ‘know your rights’ training and artistic activism; and shared their lunch with the homeless. The second day, they went to the office of the Newark Public Schools and blockaded an intersection. They locked arms, some in PVC tubes, and snarled traffic in downtown Newark. Their demands were for local control of schools and stopping the privatization and corporatization of Newark schools.  After holding a blockade for nearly 12 hours, the students released their arms and formed a group hug chanting “I believe that we will win! I believe that we will win!” (Check out this link for lots of great photos by citizen journalists on the scene.)

The protest was well-organized, nonviolent and effective. Well, it was nonviolent until the finale when two police officers abused their power and broke the hand of 17 year old, Kristin Towkaniuk, the president of the Newark Student Union. Newark Police Captain F. Gonzalez and Officer M. Armstead broke her hand leading students to demand their removal from the force and their public shaming.  When asked during the altercation – “why are you doing this – these are kids?” Captain Gonzalez said “oh really — I don’t care.” That is the kind of attitude that needs to be removed from all police – their duty is to ‘serve and protect,’ not abuse people.

President Obama unilaterally announced a new war that will last at least three years – the war against ISIS. Obama and Secretary of State Kerry have been careful not to call it a war, using the euphemism of a counter terrorism campaign.  Activists should not use that euphemism because it is a war that will involve massive and ongoing aerial bombings and US support of troops on the ground primarily from other countries in the region. Obama said there would be no combat troops on the ground, but he has been gradually escalating the US troop presence (now about 2,000) which he says are “combat ready.”

Unilateral war by the president is illegal, as we wrote last June. We agree with Mark Weisbrot that the military attack President Obama announced needs to be debated in Congress and the UN Security Council.  The House, by a landslide, passed a resolution this summer telling Obama he needed congressional authorization for war, but the president has decided to ignore them, violating domestic and international law.

Popular Resistance, along with a host of others, opposes the war on Isis. We compiled the views of many who provide good reasons for opposing this new war in Iraq and Syria – President Obama is the fourth president to bomb Iraq. Matthew Hoh, a veteran and the former director of the Afghanistan Study Group, says “perpetual war” is now the policy of the United States. Author, Nicolas J. S. Davies, points out that since 9/11 the United States has conducted 94,000 air strikes in the Middle East. The result has been one million people killed, many millions displaced and chaos in the region.

This new war will not only be in Iraq but will include Syria. This puts the US military in the midst of a complex, multi-sided civil war. President Assad, who has been violating the human rights of Syrians, is also fighting ISIS. This will bring more destruction to a country that is reeling from destruction. This week we joined in the call for release of Syrian political prisoner Razin Zaitouneh. She was part of the movement in Syria challenging President Assad before this turned into a civil war with foreign powers supporting different factions.

Protests against the new war began as President Obama was speaking to the nation announcing the war and it will be our job to mobilize a campaign to stop this war. One of the challenges is the propaganda of corporate media that rarely presents views that oppose war. The peace movement needs to pierce that propaganda so people understand what is happening and mobilize people to campaign against the ISIS war.

The build-up to the People’s Climate March scheduled for Sunday September 21, and the Global Climate Convergence for the two days before that as well as the Flood Wall Street/Beyond Wall Street actions for two days after, continues and the events are looking like a major step forward for the climate movement. (March with Popular Resistance, sign-up here.) On Monday morning after the march join us for mass climate resistance at the New York Stock Exchange, when occupy joins with climate justice.

The events are coming at a critical time as reports are showing a rapidly worsening climate reality. This week the UN’s weather agency announced that “more carbon dioxide was emitted into our atmosphere between 2012 and 2013 than in any other year since 1984, putting humans on the fast track toward irreversible global warming.” And, a landmark report concluded “by 2018, no new cars, homes, schools, factories, or electrical power plants should be built anywhere in the world, ever again, unless they’re either replacements for old ones or carbon neutral.” And, Greenpeace reports that ¾ of the arctic ice has melted in 30 years.

We have been publishing a series on the climate movement as part of the build-up to the weekend of the People’s March.  This week we focused on why a movement that can put hundreds of thousands in the streets, get tens of thousands to risk arrest and mobilize for creative and aggressive blockades and other actions across the country, cannot create climate justice. Why is the movement unable to impact climate policy?  We provide some answers (1) the traditional environmental movement needs to stop compromising and supporting policies that do not work and be in solidarity with the more aggressive components of the movement, and (2) the movement needs to broaden to include labor, business and other components because climate affects us all.  We expect that during the People’s March weekend these views and more will be sharpened.

The final article in the series coming out this week will focus on what the movement should be demanding.  This week we published some ideas put forward by climate justice activists that make a lot of sense. We need to call for big solutions because we are facing a big crisis.  One big idea was the need for a zero emissions economy, something that sounds hard to imagine but can, in fact be done.  Another is to rapidly push toward a carbon-free, nuclear-free energy economy.  If you know anyone who thinks nuclear is part of the solution, share this powerful analysis by Ralph Nader on why nuclear is not the answer.  Finally, one thing often left out when people advocate for climate justice is the reality that energy poverty exists for much of the world. So, as we reduce energy consumption in countries that use too much energy, we need to recognize that to lift people out of poverty and provide for a decent life for billions, that energy equity is part of the solution.

The grassroots continue to battle. We’re pleased to report that one of our favorite local climate justice groups, MI CATS, had all the charges dropped in a protest held in memory of the 2010 Tar Sands disaster in the Kalamazoo River. And, in Massachusetts an enlightened prosecutor recognized the necessity defense for a climate blockade and reduced the charges. In Appalachia, there was a week of actions against mountaintop removal and poisoning of water.  Water is also the issue farmers are fighting in North Dakota due to the oil boom.  In Arilngton, VA,nearly a hundred people protested the relationship between Dominion, the monopoly Virginia energy producer, and ALEC, which works to undermine clean energy.

Epic Internet Slowdown Leads to 1,000 Calls a Minute to Congress

This week was also a major week of action for net neutrality activists. Net neutrality affects us all because our ability to build the citizens media is key to ending the dominance of misinformation in the corporate mass media. The conflict between big telecom vs. the world, is a battle that needs each of us to take action in whatever way we can.  As the founder of reddit wrote, the Internet needs your help to survive.

This week’s big event was the Internet slowdown. It was an epic moment for advocates for an open Internet with equal access and no discrimination – 2,039,500 people took action including sending 2, 167, 092 emails to Congress and making 303,099 phone calls to Congress. By mid-day, Congress was receiving more than 1,000 calls per minute.  Since March 1st, 4.7 million comments have been filed with the FCC.

This week, on September 15, the final day for FCC comments (tell decision makers you want net neutrality here), there will be protests in New York, Philadelphia, Atlanta and Dallas. And, beyond that we are urging the FCC to get out of DC and hold hearings across the country so they can hear directly from the people (tell them to get out of DC here).

On all of these issues, the people know the right solutions but the mirage democracy of the United States, a government dominated by money not by people, is dysfunctional and unable to put in place the solutions we need. For an in-depth understanding of the power dynamics, the Deep State, we featured a chapter by Bernd Hamm as a three-part series called The End of Democracy as We Know It. Read Part I, Part II and Part III.

As Move to Amend points out this was always seen as a partisan election year tool for the Democrats to show they are on the side of the people who want money out of politics. The Democrats, who are raising more money than the Republicans, know the people see the corruption in Washington, DC and need to look like they are doing something. To highlight the Democratic hypocrisy, the lead spokesperson for the amendment was Wall Street’s Senator, Chuck Shumer (D-NY).  Despite this, no doubt the Democrats scored some partisan points in an election year and kept some partisan progressives in the fold.

But, Move to Amend also points out, the proposal was insufficient as it did not go to the heart of the matter. The proposal failed to recognize that money is not speech and that corporations are not people with human rights. These two legal concepts are the root cause of the problem and neither was addressed.

All of the issues we face have at their root a government dominated by oligarchs where the people are ignored. Creating a democracy where the people actually rule would dramatically change the direction of the country. We have our work to do to build the kind of movement that can end the rule of money, stop corporate power and build the power of the people.

We hope to see many of you next week in New York City at the Global Climate Convergence and the People’s March and related activities.