Click on the video above to watch it. Download the class one curriculum as a pdf here or see it below:  course-1-class-5

Roles of Individuals and Organizations

We review the four roles that individuals and organizations play in a social movement and what makes them more or less effective. We also discuss how coalitions function and basic principles for making them effective. Finally, we discuss the non-profit industrial complex. 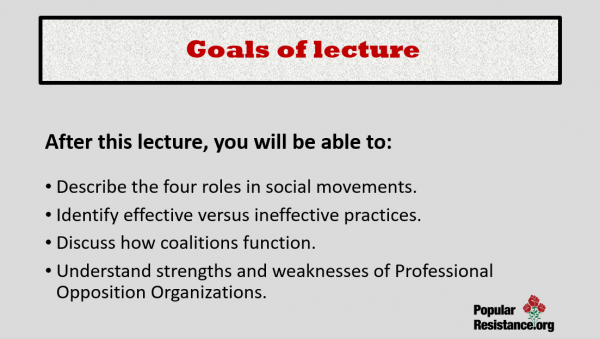 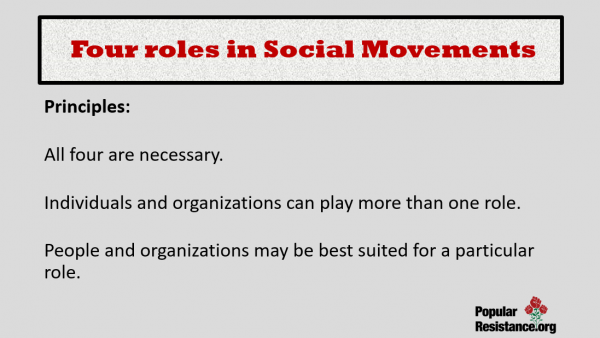 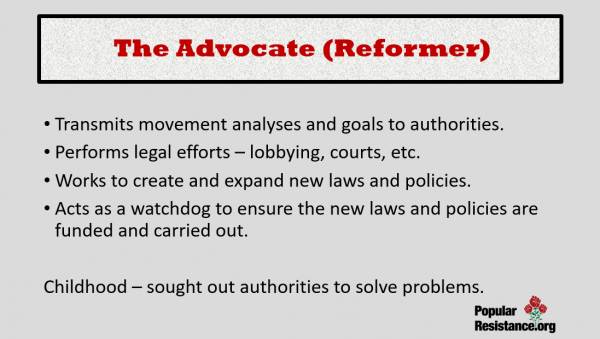 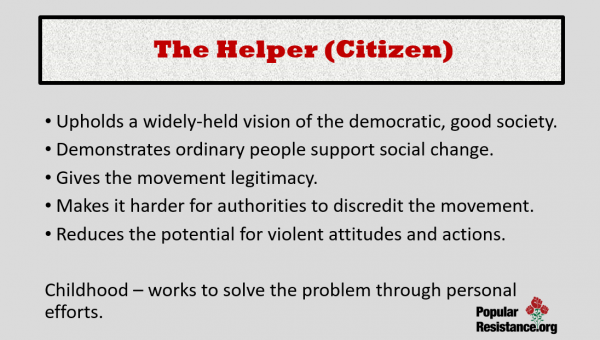 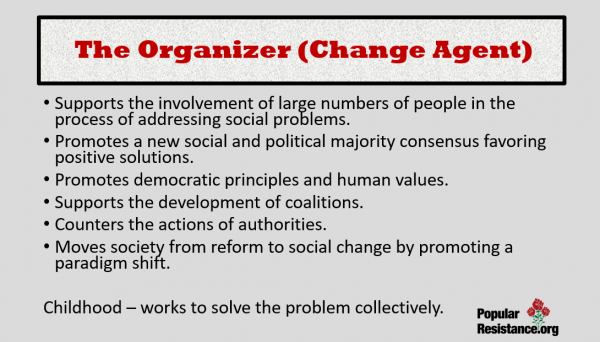 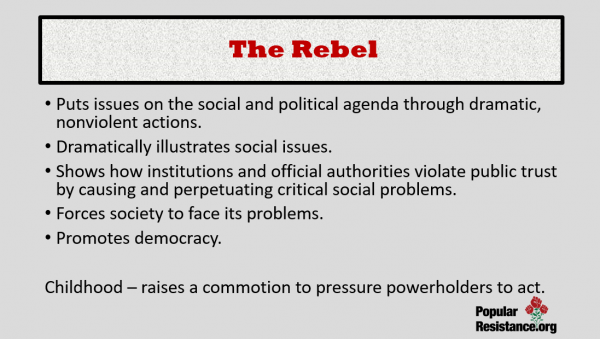 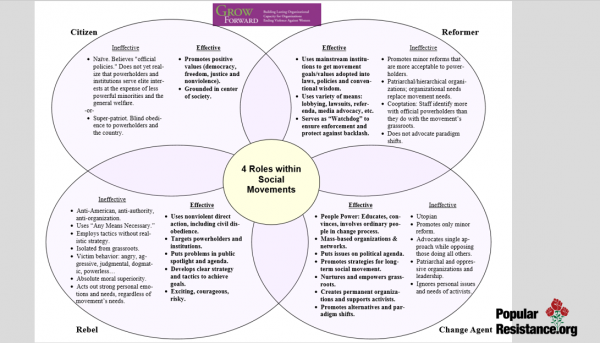 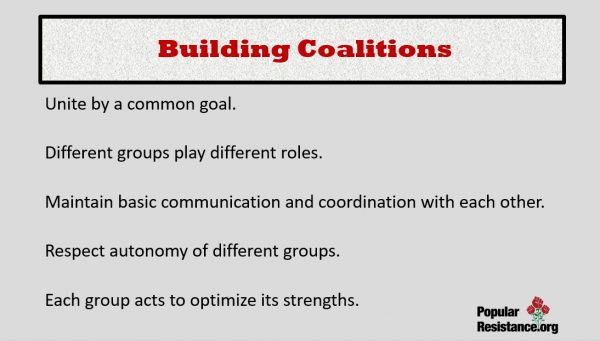 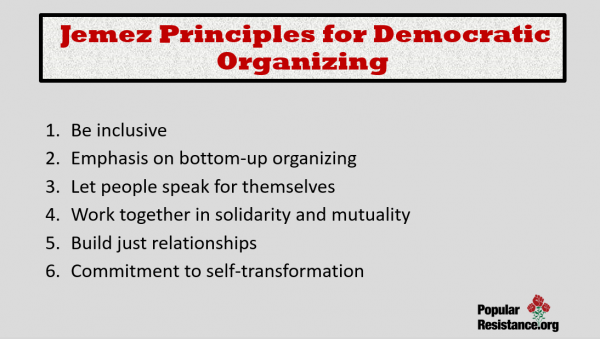 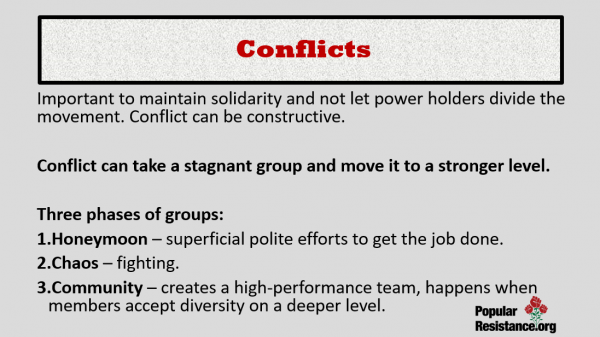 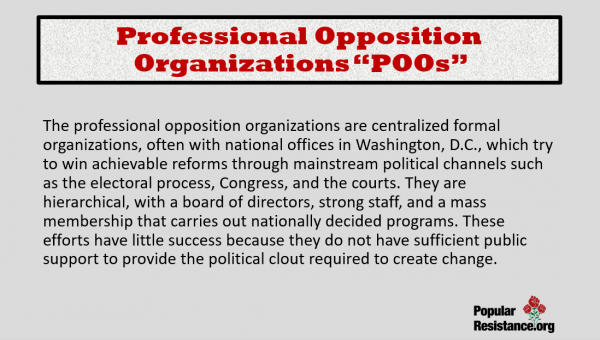 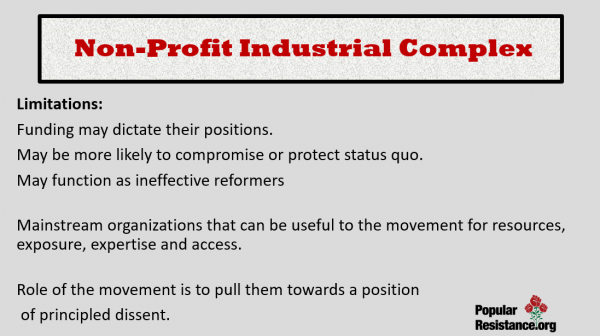 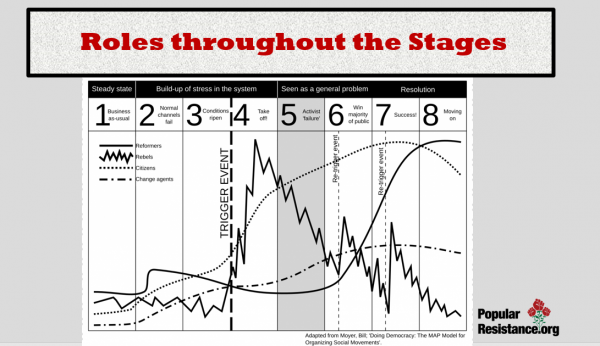 The four roles of activism (by Andreas Speck, from War Resisters’ International)

The second central concept of the MAP are the four roles of activism. Each of these roles has its own relevance, which can shift through the different stages of a movement. But all roles need to be present and work efficiently for the movement to succeed. In addition, each of the roles can be filled in an effective or ineffective way.

The rebel is the kind of activist many people identify with social movements. Through nonviolent direct actions and publicly saying “no”, rebels put the problem on the political agenda. But they can be ineffective by identifying themselves as the lonely voice on society’s fringe and playing the militant radical. Rebels are important in Stages 3 and 4 and after any trigger event, but they usually move over to other ripening movements in Stage 6 or later.

Reformers are often badly valued in movements, but they are the ones who prove the failure of existing channels or promote alternative solutions. However, they often tend to believe in the institutions or propose reforms too small to consolidate the movement’s success.

Citizens make sure the movement doesn’t lose contact with its main constituency. They show that the movement acts at the centre of society (teachers, physicians, and farmers participating in the Gorleben protests), and protect it against oppression. They can be ineffective when they still believe in the powerholders’ claim to serve public interests.

The change agent is the fourth and somehow key role in any movement. They promote education and convince the majority of society, they organise grassroots networks and promote long-term strategies. They too can be ineffective by promoting utopian visions or advocating only a single approach. They also tend to ignore personal issues and needs of activists.

Many activists and groups identify primarily with only one or two of the four roles, because each involves different emotions and attitudes, beliefs, ideologies, sources of funding, political and, often, organisational arrangements. Activists can be critical – or even hostile – to those playing other roles. Activists tend to consider the roles they play as the most important and politically correct one, while viewing other roles as naive, politically incorrect, ineffective, or, even, as the enemy.

While there are certainly tensions between the different roles, recognising that each has its own value within a social movement is important to achieve success.

What is Coalition Building?

A coalition is a temporary alliance or partnering of groups in order to achieve a common purpose or to engage in joint activity. Coalition building is the process by which parties (individuals, organizations, or nations) come together to form a coalition. Forming coalitions with other groups of similar values, interests, and goals allows members to combine their resources and become more powerful than when they each acted alone.

Why is Coalition Building Important?

The “ability to build coalitions is a basic skill for those who wish to attain and maintain power and influence.” Through coalitions, weaker parties to a conflict can increase their power. Coalition building is the “primary mechanism through which disempowered parties can develop their power base and thereby better defend their interests.” Coalitions may be built around any issue and at any scale of society, from neighborhood issues to international conflict.

The formation of a coalition can shift the balance of power in a conflict situation and alter the future course of the conflict. People who pool their resources and work together are generally more powerful and more able to advance their interests, than those who do not. Coalition members may be able to resist certain threats or even begin to make counter threats. Generally, low-power groups are much more successful in defending their interests against the dominant group if they work together as a coalition. This is certainly more effective than fighting among themselves and/or fighting the dominant group alone.

How Do You Build a Successful Coalition?

Building a successful coalition involves a series of steps. The early steps center on the recognition of compatible interests. Sometimes this happens naturally. Other times potential coalition members must be persuaded that forming a coalition would be to their benefit. To do this one needs to demonstrate

What are the Benefits of Coalitions?

Disadvantages of Working in Coalition

Deciding whether to join a coalition is both a rational and an emotional decision. Rationally, one must consider whether one’s effectiveness and one’s ability to attain one’s own goals would be enhanced or harmed by participation in a coalition. Emotionally, one must consider whether one likes the other people or groups, and whether cooperating with them would be easy, or more trouble than it is worth. Usually when two people, groups, or organizations’ goals are compatible, forming a coalition is to both groups’ benefit. But organizational styles, cultures, and relationships must be considered as well before any choices are made.

What Role Were You Born to Play in Social Change? By George Lakey, 2016.

Building Our Muscles for Conflict by George Lakey, 2013.