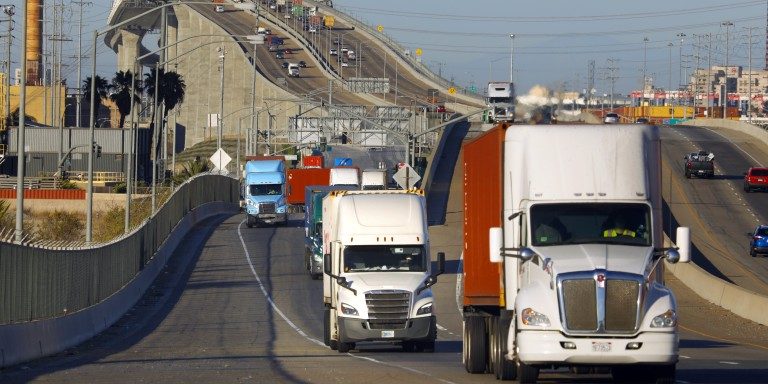 Above Photo: Trucks move across Terminal Island through the ports of Los Angeles and Long Beach in July. Carolyn Cole / Los Angeles Times.

One of the world’s largest trucking companies, XPO Logistics, agreed Tuesday to pay $30 million to settle class-action lawsuits filed by hundreds of drivers who said they earned less than minimum wage delivering goods for major retailers from the ports of Los Angeles and Long Beach.

The settlements amounted to a major victory for the International Brotherhood of Teamsters, which applauded the lawsuits as part of a decades-long effort to organize the twin ports’ more than 13,000 drivers.

Trucking companies classify many of their drivers as independent contractors, thus making them ineligible for a host of labor protections, including the ability to collectively bargain for wages.

In recent years, California’s labor commissioner’s office has awarded more than $50 million to some 500 truckers who claimed they were deprived of wages through misclassification as contractors rather than employees. At the same time, many truckers have shied away from working as employees, preferring to own and operate their own vehicles.

But as the pandemic has driven supply chain snarls, port drivers have voiced growing frustration at a loss of income as they wait in hours-long lines at the ports — time for which they would be compensated if they were employees.

The settlements do not require XPO to reclassify its drivers as employees, but labor leaders nonetheless hailed the agreements, which will compensate 784 drivers, as a turning point in the fight over port drayage. The settlements are preliminary, but individual drivers could receive as much as $100,000, depending on how long they worked for the company.

“Misclassification of workers is all too common in the ports,” Ron Herrera, president of the Los Angeles County Federation of Labor, said in a statement. “While XPO is notorious, there are far too many employers still cheating workers out of the pay and the rights they deserve.”

A spokesman at the company’s Greenwich, Conn., headquarters declined to elaborate on XPO’s decision beyond an official statement: “With the legal and regulatory landscape in California evolving, we reached a settlement on terms that are favorable for XPO and should put this matter behind us.”

The reference to California’s “legal and regulatory landscape” alluded to a 2018 law, Senate Bill 1402, which makes logistics companies’ customers — including major retailers such as Amazon, Walmart, Target, Apple, Ikea and Toyota — jointly liable for wage violations if their contractors have unsatisfied final judgments.

That law was further tightened last month when Gov. Gavin Newsom signed Senate Bill 338, which triggers joint liability for retailers that hire logistics companies with repeat violations, regardless of whether a judgment is satisfied.

“California’s port drayage drivers are the last American sharecroppers, held in debt servitude and working dangerously long hours for little pay,” the Legislature said in its preamble to the new statute.

Independent contractors lease trucks from companies but “can be terminated at any time and lose the money they thought they were paying toward the truck. Companies deduct money from driver paychecks for business expenses that lead to poverty wages,” the Legislature said.

The XPO settlements come in the wake of setbacks for California’s trucking industry, which has sought to be exempted from Assembly Bill 5, a broad statute that followed a 2018 California Supreme Court decision setting strict conditions on the classification of workers as independent contractors.

Cal Cartage Transportation Express, which brought the lawsuit, has been locked in a dispute with the city of Los Angeles over its classification of workers as contractors rather than employees.

Another case brought by the California Trucking Assn. against AB 5 has yet to be resolved. A spokeswoman for the association declined to comment on the XPO settlements.

The Supreme Court decision and new laws affecting port drayage show “it’s clear that it will be harder and harder for trucking companies to continue to flout our laws — and harder for their retailer customers to turn a blind eye,” said Jessica Durrum, director of the ports and goods movement campaign at the Los Angeles Alliance for a New Economy, a labor-affiliated nonprofit.

With $16.25 billion in 2020 revenue and more than 100,000 employees in 30 countries, XPO is the world’s second-largest logistics provider and freight broker. The company is under pressure from U.S. and international unions to improve conditions for its labor force.

A 2020 report by the Teamsters along with labor groups in nine European nations, “XPO Delivering Injustice,” accused the company of negligence in exposing workers to COVID-19 during deadly outbreaks at its facilities, as well as wage theft, gender discrimination, sexual harassment and extreme anti-union tactics.

XPO spokesman Joseph Checkler said the report’s allegations “are wholly inaccurate and have been entirely debunked. These union-affiliated groups continue to spread false information to further their financial agenda.”