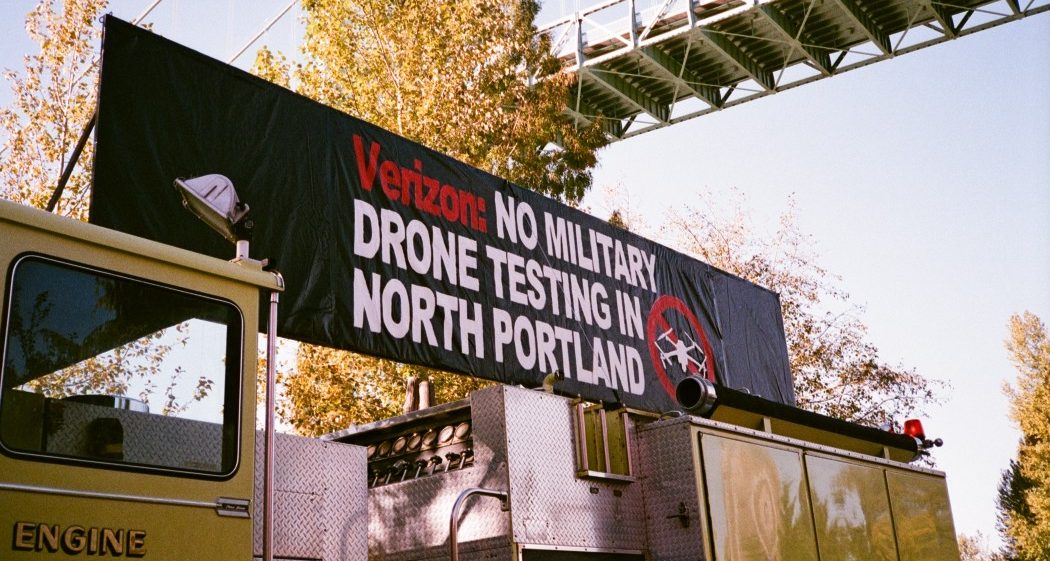 Neighbors and River Advocates Focus on Next Steps.

Verizon’s Skyward subsidiary had sought to test drones with military applications on the Willamette River in North Portland, a proposal that met vigorous disapproval from locals.

Last week, the Port of Portland announced it would cancel a pending lease with Verizon for seven acres of riverfront property in one of Portland, Oregon’s most diverse neighborhoods. Verizon and their Portland-based subsidiary Skyward had sought to lease this area to test drones on Verizon’s 5G network along the Willamette river.

“We appreciate the Port responding in support of community members and organizations who organized quickly to oppose this facility,” said Cassie Cohen (she/her), Executive Director of the Portland Harbor Community Coalition. “It’s now time for impacted communities to determine a more appropriate purpose for this sacred land, and other river-front parcels like it — including potential zoning changes. There should be a community-centered process moving forward in land use decisions so that this level of conflict does not resurface again.”

Neighbors raised a variety of concerns around the communication and approval process for the facility, as well as its environmental, social justice, and quality of life impacts. Without Portland’s Greenway Overlay Zone notification requirements, the Neighborhood Association would have never heard about the development until construction began. Residents also highlighted the possibility of potentially disastrous collisions with the helicopters, small planes, and birds of prey that frequently fly over the river and neighborhoods. They held protests and packed contentious listening sessions with the Port of Portland and Verizon/Skyward.

“This just goes to show that important decisions regarding publicly owned lands are best made when the community and their public officials work together. All stakeholders must be considered when it comes to the revitalization of our beautiful river,” said Matt Stein (he/him), whose Green Anchors Eco-Industrial Park is located next to the cancelled drone testing site. “Portlanders care deeply about restoring the Willamette, and doing what is good both for the river and for our community.”

“This is a major grassroots win,” said Lia Holland (she/they), an activist with national digital rights organization Fight for the Future who lives in North Portland. “But it also illustrates how much work the City, Port and companies like Skyward that profess human rights and racial justice as core values have before them. Right now, there are few meaningful regulations on drones, data privacy, or law enforcement surveillance collusion in our city — with Portland’s recent bans on facial recognition as a notable exception. The protection of the rights of Portlanders when it comes to new technologies should be on the agenda for City government right now. Innovation won’t slow down. Our representatives need to catch up.”