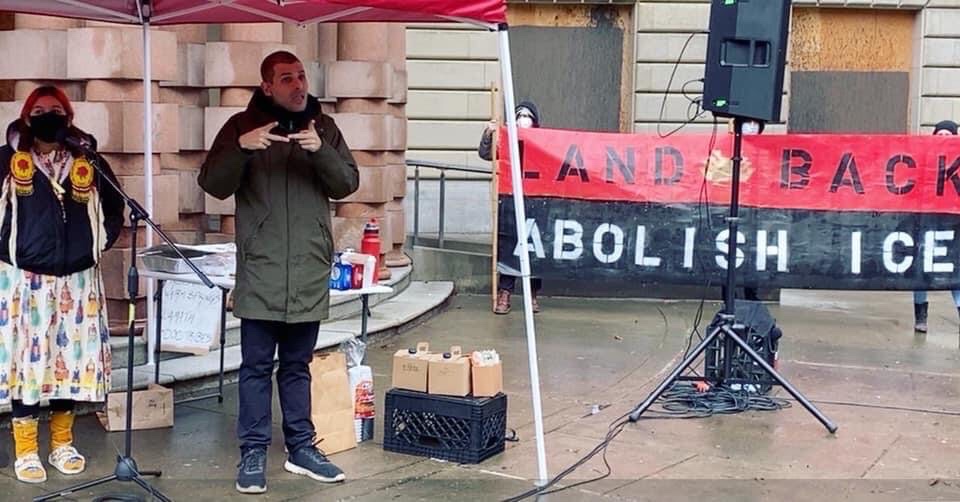 By ICE, the Portland police, and white supremacists.

On the early morning of February 5th in downtown Portland, members of Oregon’s Indigenous Tribes held a press conference at Portland City Hall among a large showing of community.

They addressed the violent targeting and violations of their right to protest and practice religious ceremonies by federal ICE (Immigration and Customs Enforcement) agents and Portland police officers.

This targeting took place while Tribal members were holding an Indigenous religious ceremony to honor ICE detainees and commemorate the lives of those lost while in federal custody.

A press release from Indigenous Bloc quoted an unnamed Oregon Tribal who said that it is their constitutional right to protest— but also their duty to keep a vigil “as a community striving for liberation together”.

The morning began with Indigenous Bloc of Portland leading a sacred indigenous morning prayer at Salmon Street Springs overlooking the Willamette River which included drumming and song. With “Abolish ICE” banners and “Land back” signs in hand, a group of over 30 community members marched in the streets to Portland City Hall a few blocks away.

At 8:15 a.m., members of Portland’s Indigenous Community representing the Navajo Nation, Fort Hall (Shoshone Bannock Tribes), Confederated Tribes of Grand Ronde, Klamath Modoc Tribes, and Confederated Tribes of Warm Springs spoke about their experiences and instances when they were targeted by officers at their ceremonies and vigils.

Later that day, several protesters were appearing in federal court to face charges stemming from their arrests at the ICE building while attending the regular vigils held for immigration detainees.

Watch the full press conference here from Dakisback, a Portland livestreamer, or read quotes and watch video from individual speakers below.

“I was at the Red House, I was one of the arrestees also. In short, they took my eagle feather, that was against the Indian Freedom Act and freedom of speech. That’s a no-no. They owe me an eagle feather; I could care less about my clothes, please only my eagle feather.”

Learn more about the importance of eagle feathers in Indigenous culture here and here. Members of Indigenous Bloc wrote that stealing an eagle feather is like police seizing family heirlooms or heritage pieces.

Also at the press conference, was Xul-Xi-Yut (Indigenous Name) or Angela, a member of the Warm Springs / Klamath Falls Tribe (arrested on October 17, 2020 and January 21, according to Indigenous Bloc).

Hear her full talk here, including her making the traumatizing connection between ICE agents and the original European colonizers.

About retaliation to the vigils, she also said:

“I was detained outside of ICE holding a balloon. That was my weapon of choice apparently. The second time I had flowers to set up the memorial. So flowers apparently were my second weapon of choice. They destroyed the altar, flowers, they stepped all over them, they stepped over the candles. [See video above] They maced all of us for bringing balloons. And these balloons were reminiscent of the 193 people who’ve died in ICE custody since 2004. And I’m sure there’s plenty more now. On these balloons, we had 100 different facts about ICE and the travesties that they’ve done to humankind.”

Raven (Indigenous Name) a member of the Purépecha Nation in Michoacán encouraged everyone to be strong in the fight to abolish ICE. Watch her full talk here.

About her experience with the ICE vigils, she said:

“I have been setting up the vigils at ICE almost every single day for two weeks and every single day the DHS officers stomp it down. I have seen them kick it down with my own eyes. They told me once that they never wanted to see it again. I don’t think that they realized that a lot of this stuff is really personal for us and even though we are indigenous to these lands, we are being deported every single day and our families are being chased after by federal agents. And there are some days that we don’t even know if we can’t get a hold of someone because they ran out of data or because they’re not in this country anymore. And I think a lot of people wonder why we keep going to ICE. And that’s why people are being attacked and killed and ICE is literally committing genocide as we speak and enough is enough. I don’t know how anyone can let this go on any longer and feel okay with that.”

Lilajane, a member of the Warm Springs and Yakama Tribe also spoke.

Hear her full talk here, including her experiences at protests and vigils. She said:

She later said that usually they are arrested for just being there, but she said she thinks they have a right to be violent because of historical injustices and their fight for survival. She said:

“If we are your version of peaceful you won’t listen to us. And Indigenous people, we are ignored. We’re invisible except in police brutality. Except to ICE. ICE sees us.”

About their motivation for protesting ICE, she said:

“We protest at ICE because they are in the process of eliminating people, again. The sterilization of mothers in their custody is disgusting. There’s no reason for it. The big wipeout and we’ve seen it before. So our allies are asked to stand in solidarity with our Indigenous people, with our folks from across the border that need our support, because they’re human too. We’re all human. To our native people, they’re not immigrants, this is their land, we need to respect that. We need to support our Indigenous neighbors, and make sure that we’re there for them in solidarity whenever they call upon us because they are who matters because this is their land, and we need to respect that.”

She ended her talk by asking the crowd: “When Black, Brown, and Indigenous lives are under attack, what do we do?”

“Stand up, fight back!”, they responded in unison.

Carissa Dez is new to the journalism world, but is learning quickly as she works in the field. Carissa live streams events, edits video, writes, and uses photography to tell a complete story.