You’d be forgiven if the phrase “Portland goes green with innovative water pipes” doesn’t immediately call to mind thoughts of civil engineering and hydro-electric power. And yet, that’s exactly what Oregon’s largest city has done by partnering with a company called Lucid Energy to generate clean electricity from the water already flowing under its streets and through its pipes.

Portland has replaced a section of its existing water supply network with Lucid Energy pipes containing four forty-two inch turbines. As water flows through the pipes, the turbines spin and power attached generators, which then feed energy back into the city’s electrical grid. Known as the “Conduit 3 Hydroelectric Project,” Portland’s new clean energy source is scheduled to be up and running at full capacity in March. According to a Lucid Energy FAQ detailing the partnership, this will be the “first project in the U.S. to secure a 20-year Power Purchase Agreement (PPA) for renewable energy produced by in-pipe hydropower in a municipal water pipeline.”

As the video explains, Lucid Energy’s system isn’t affected by the sort of external conditions (namely: the weather) upon which other renewable energy sources–like solar and wind power– are reliant. Nor does the technology, completely ensconced within a pipe, have adverse effects on a surrounding environmental ecosystem, as an exposed hydroelectric dam might.

Fast Company points out that, in order to be cost and energy effective, Portland’s new power generators must be installed in pipes where water flows downhill, without having to be pumped, as the energy necessary to pump the water would negate the subsequent energy gleaned. However, Fast Company also notes that the system does more than simply provide electricity: It can monitor both the overall condition of a city’s water supply network as well as assess the drinking quality of the water flowing through it. 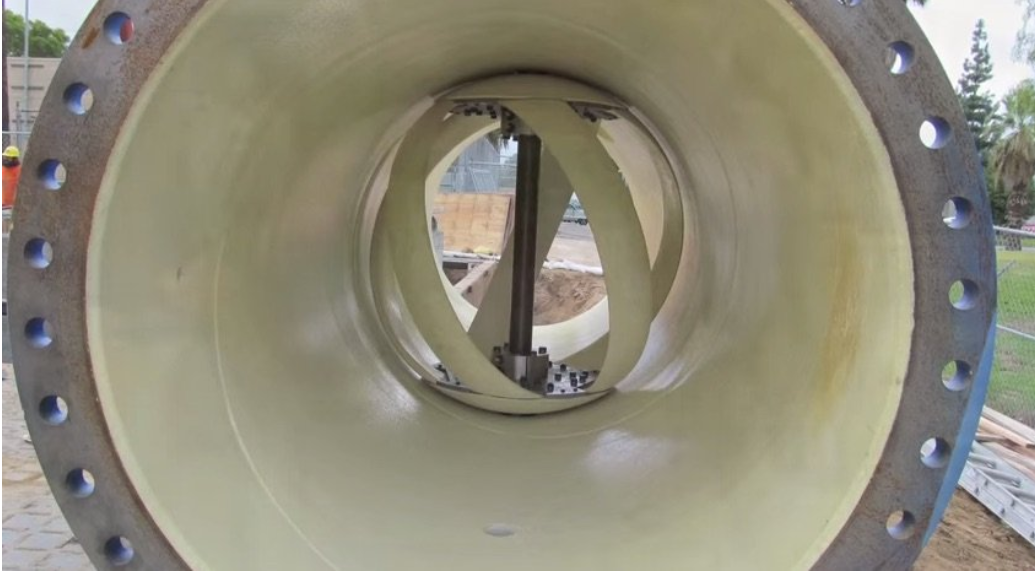 According to Lucid Energy’s FAQ, the partnership between the company and the city of Portland is currently finishing its “commissioning” phase, in which the system–particularly the aforementioned monitors and sensors–is put through rigorous final-stage testing. Once fully operational, the installation is expected to generate $2,000,000 worth of renewable energy capacity over twenty years, based on “an average of 1,100 megawatt hours of energy per year, enough electricity to power up to 150 homes.” The money generated will be split among the project’s investors, as well as will be used to recoup the cost of construction, and ongoing upkeep of the system. After 20 years the Portland Water Bureau will have the right to own the entire project and all subsequent energy and profit generated by it.

Using green tech to generate power and revenue from an existing municipal resource? Now all Portland needs to do is put a bird on it.