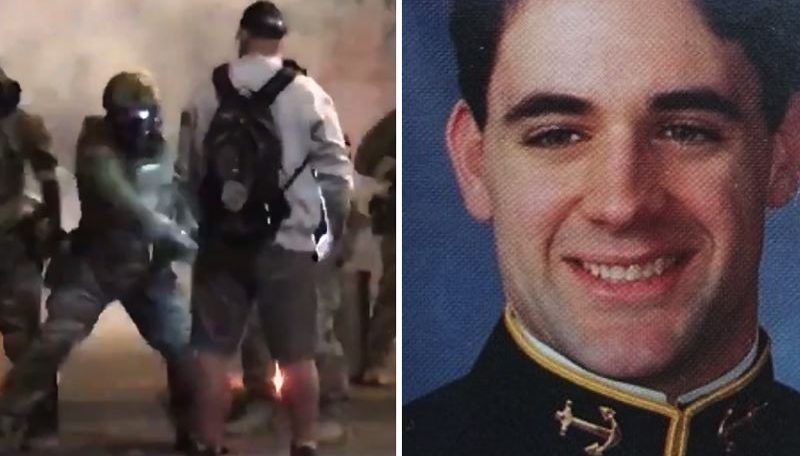 Above photo: Portland protester, Navy veteran, was repeatedly struck by police in Portland. The photo on left is when he joined the US Navy after high school. From the Portland Tribune.

Chris David of Portland was struck repeatedly by federal officers’ batons during a downtown rally on Saturday.

Christopher David is not a man of steel.

But he has earned that and other nicknames — some call him “Captain Portland” or “Supersoldier” — after David stood as solidly as a rock while federal officers pepper-sprayed him twice and struck him at least five times with a baton during a rally outside the Hatfield Courthouse on Saturday, July 18.

Of the attack, captured on video by the Portland Tribune, David says he “just took it.”

David, 53, of Portland, is hardly an anti-establishment type. He says he attended the U.S. Naval Academy in Annapolis, Maryland, after high school, later serving with the Navy Seabees while becoming a commissioned officer and aeronautical engineer.

The unmatched series of protests here have waxed and waned for more than 50 nights, but Saturday’s rally was David’s first, his attendance spurred by reports of unmarked vans snatching protesters off the streets without due process.

He arrived around 8 p.m. and was just planning on leaving when federal officers burst out of the bricked-up front of the courthouse around 10:45 p.m.

David said he slowly approached the officers, hoping to engage them in dialogue.

“I felt these gentlemen were violating their oath of office, and I wanted to talk to them,” he explained.

Things didn’t go according to plan.

As some federal officers rushed to push down makeshift barricades propped against the outer doors of the courthouse, one officer pushed David back. He stood stock-still as several more officers swarmed forward, striking him with a baton and pepper-spraying him. David says he lost his vision momentarily, due to the spray and clouds of tear gas engulfing the park.

He sat down on a park bench, before being pulled back from the flashpoint by a street medic, going by the name Tav, who treated David and ensured that he was taken by an ambulance to the hospital.

David says he has two fractures in his hand and, while it’s currently in a splint, he is expecting to need surgery later this week.

After a flurry of attention, David is hoping life will return to normal soon. While he never did speak with the camouflaged feds, he said he hopes they hear his message:

“That oath of office is essentially swearing loyalty to the Constitution of the United States, and what they’re doing is not constitutional anymore.”