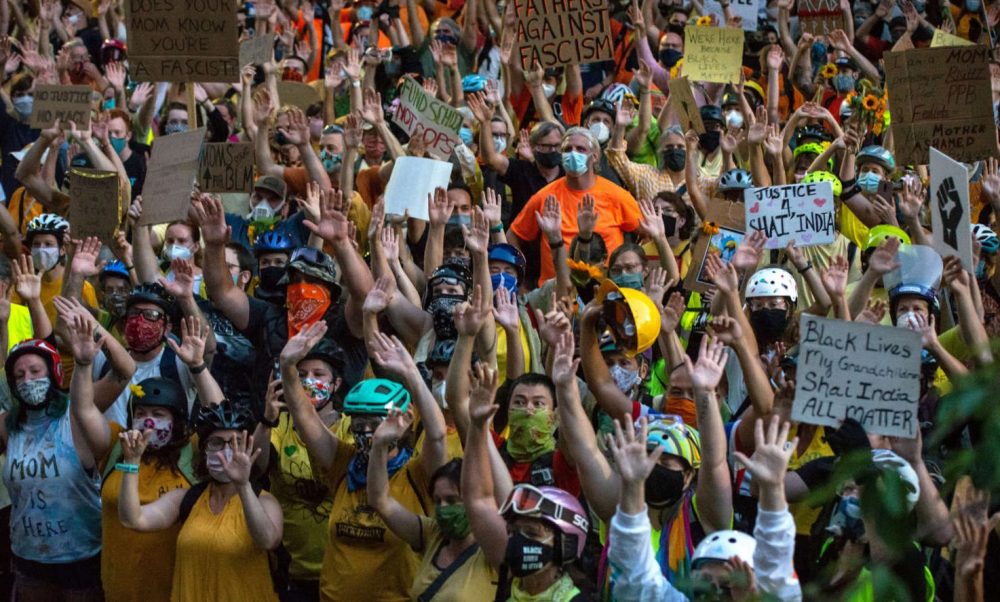 Portland’s Wall Of Moms Joined By Dads With Leaf Blowers

Above photo: Portland, OR protesters holding their hands up on July 20, 2020. Photo by Nathan Howard for Getty Images.

In response to the use of tear gas being utilized by federal officers against demonstrators, including a group of moms, in an uprising in Portland, Oregon, this week, a like-minded dads’ group encouraged others to show up to the event with leaf blowers in order to dissipate the chemical agents.

Uprisings in Portland have happened nightly since the end of May, in response to police violence against Black Americans, including renewed attention to Jason Washington, a Black resident of the city who was shot and killed by police in 2018.

Tensions have escalated in recent weeks as federal officers began appearing at the events. Last week, there were reports of agents in unmarked vans stopping next to protesters, whisking them away in the vehicles without stated justification and without identifying who they were. Those actions prompted an outcry from Portland residents and action from a group of mothers who appeared over the weekend to protect demonstrators by standing between them and officers.

Those individuals, known as the Wall of Moms for their way of interlocking arms as a means to protect protesters, were themselves attacked by officers with tear gas during their peaceful demonstrations. On Monday, several social media posts from the group known as “PDX Dad Pod” encouraged its members and others to appear with leaf blowers, even telling users who followed them on social media that it would be a great purchase to support local businesses.

Video from confrontations between demonstrators and officers on Monday night into Tuesday morning highlighted how protesters used hockey sticks to shoot tear gas canisters back toward those who fired them, and the leaf blowers as a means to dissipate clouds of chemicals away from protesters. Smaller leaf blowers were also used to help get chemicals off people’s bodies, video also showed.

To be clear, I haven’t seen different behavior from protesters tonight. The lack of response from police so far is definitely because of the demographic of the crowd. We would have been tear gassed by now on a normal night.

A protester by the name of King Turner spoke to local news affiliate KPTV about the demonstrations, and the federal government’s intrusion into the events, suggesting that their presence, not the protesters’, escalated the situation.

“I’ve just had enough. When they started snatching people [off] the street, it becomes apparent that the federal government is just … not in check,” Turner said. “It was even tampering down, and then the feds get involved and lit it up. It’s like throwing gas on a fire.”

After word reached the Department of Homeland Security (DHS) about the use of leaf blowers against tear gas, an official within the department told Washington Post reporter Nick Miroff that they were frustrated with efforts by protesters to do so, and astonished that they’d return the chemicals back toward the federal officers who initially fired them off.

NEW Trump is preparing to send in the feds to Chicago and possibly other U.S. cities as he campaigns against “radical left” mayors and says “the whole country will go to Hell ” if Biden wins https://t.co/0fUEjKzpkF with @markberman

That prompted a number of responses, some comical and some in disbelief, from users on social media over that official’s bewilderment.

our democracy is being destroyed by people who lost a battle of wits to a leaf blower https://t.co/GLEJTXMBQF

leaf blowers will soon be designated as terrorism paraphernalia. https://t.co/w4pclQrPE6

The only way to stop a bad guy with tear gas is a good guy with a leaf blower. https://t.co/UiVTL1HlET

A protester who goes by the alias “Doug Smith” and who spoke to Truthout about the events in Portland also responded to that DHS official’s complaints.

Smith also explained that the use of leaf blowers to counter the use of chemical agents used against demonstrators could be more effective if even more protesters showed up with them.

“Honestly, I think you’d need scores of leaf blowers with a phalanx of dads holding their ground under pretty perfect conditions to use them effectively in the dispersal of chemical agents,” he said. “But they are an iconic symbol of a tool dads use to clean up messes.”

Chris Walker is Truthout’s News Writer and is based out of Madison, Wisconsin. Focusing on both national and local topics since the early 2000s, he has produced thousands of articles analyzing the issues of the day and their impact on the American people.