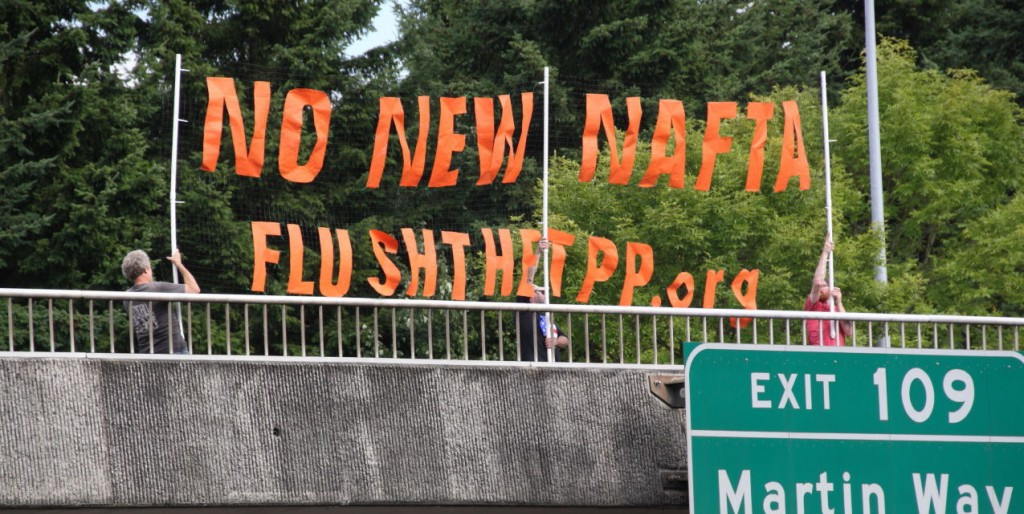 This presentation is one of three presented August 29, 2017, on “Debating Free Trade.” Opposing perspectives in the debate were offered by Pat Coony supporting “Free Trade“ and Cliff DuRand opposing it.

NOTE: Join our action October 11, 2017 in Washington, DC to protest the NAFTA re-negotiations. Respond to and share the Facebook Page.

Like a global vampire that drains the blood of one victim after another, so too does the neo-liberal economic system. Under the misleading name of “free trade,” it drains the world of all resources vital to the life of the planet, including the value of human life.

Proponents of “free trade” publicly base the validity of this model on “trickle down economics,” what’s good for corporations is good for everyone and eventually, their success will filter down to the workers. History refutes their theory as self aggrandizing propaganda. The very structure of this economic system must change radically.

Some people will say that the competitive, aggressive capitalist marketplace is merely a reflection of man’s true nature and a necessary element in moving innovation and history forward. But many contemporary scientists are finding evidence to the contrary. As distinguished biologist Lynn Margulis put it, “Life did not take over the world by combat but by networking.” In direct contrast to the “selfish gene” rationalization of laissez-faire capitalism, the recognition that cooperative networking is an essential part of sustainable ecosystems and can inspire new ways to structure technology and social organization for human flourishing. The Harvard mathematician and biologist Martin Nowak writes, “cooperation is the chief architect of evolution.” The dominant assumptions about human nature are not self-evident truths; however, the money-based system constructed by capitalism encourages and rewards these traits over other traditional, community-oriented values, creating a self-fulfilling prophecy about the nature of human behavior.

Trade—just like money, profits, and growth—has been viewed as an end in and of itself. Trade is, however, not the goal. It is simply a tool that we can use to further our universal goals of improving human rights, justice, sustainability, and democracy.

I was asked to consider what a model of world fair trade might look like. My research revealed a common core of values among many if not most progressive organizations. The principles that were frequently shared were:

Where do we begin in this somewhat utopian exercise given the current convergence of a cascade of crisis events? How do we frame this project to maximize its potential?

It’s not unreasonable to look toward the many emerging forms taking root in local communities around the world that are nurturing new socio/economic relationships. Cooperatives, esop’s, community councils, local social economy experiments; are all examples of localized attempts at building Solidarity within the current economic system. But how can these local structures be ramped up to form a self sustaining/supportive network?

The Cleveland Model, where an interlocking network of cooperatives and local institutional clients is one example. Advancing this approach to a larger regional scale is a worthy goal.

The Economy for the Common Good (ECG) is a coherent economic model and supposedly is being practiced in hundreds of businesses, universities, municipalities, and local chapters across Europe and South America. It purports to represent an alternative to both capitalism and communism. It emerges out of a holistic worldview and is based on a “sovereign democracy” that is transitioning toward a system that serves the common good.

The Democracy Collaborative, part of the Next System Project, held a conference in 2016 on “Taking Employee Ownership to Scale”. Some of the positive points they highlighted included: Strong support for employee and horizontal ownership among millennials and a history of cooperativism in the African American community

Simply providing equitable living wage work is no longer enough. The immediacy of climate catastrophe and the emergence of a robotic and AI oriented economy need to be incorporated into any longterm plan. Mankind’s relationships to nature and work will be changed radically. Additionally, consumerism as the driving force of the world economy must be greatly curtailed. These will all be tough issues to gain public support on, most especially in so called advanced economies.

Once you’ve scaled up this new economy nationally, is it sustainable in a single country, or will it need international development and support?

Neoliberal trade creates a strong tendency toward a race to the bottom of; wages, environmental regulation, and labor practices. It pits workers, communities and countries against each other. True justice and cooperation are foundational to a global fair trade model.

Some ideas might include; a global fair trade value policy, that promotes trade among like-minded countries and downgrades trade with countries that retain the more exploitative models. Picture an EU collective with a sustainable economic structure. Short of that, an international support network of employee owned and social economy institutions could provide a strong base for an equitable network of global trade. A sensible system would allow countries to protect their shared progressive social values, including workers’ rights and environmental laws. A new focal point would target pressing issues that affect working people and those that have been left behind under the current economy. Raising and taxation on global corporations, shutting down tax havens and coordinating enforcement efforts can be done immediately. Winners from global trade might compensate underdeveloped countries until a balance is achieved.

The Democratic Socialist platform puts forth the idea that changes in individual behavior and technology can buy time but are insufficient to save the biosphere as long as “free enterprise” allows huge corporations to continue to dictate trade policy. The entire production system must be transformed; we must change the way society decides to allocate resources in the interdependent web of the world economy. Securing an environmentally sustainable production system will require fundamental political and social change on every scale from household to planet.
For all the impacts to be taken into account, the people most affected must have the opportunity to participate in planning and decision-making, not just experts and authorities. (The interests of future generations and fellow creatures can only be defended by people in the present with values of empathy and solidarity.)

A sustainable economy requires a system in which production is democratically planned and controlled by well-informed people. Participatory democracy in practice is much more than voting every couple of years.

Profits should not serve the interests of external investors. This important shift would allow entrepreneurs and cooperatives more flexibility to work for the common good and frees them from the pressure of maximizing the return on investment. Another result is that companies are no longer forced to expand and grow. This opens up a myriad of new opportunities to design business to improve the quality of life and help safeguard the natural world. Mutual appreciation, fairness, creativity, and cooperation have a better chance of thriving in such a working environment.

We should consider identifying the most relevant aspects of a more humane quality of life and well-being and convert them to a measurable and comparable indicator. The Organization for Economic Co-operation and Development’s (OECD) “Better Life Index,” Bhutan‘s “Gross National Happiness,” and the Happy Planet Index are all examples of meaningful alternatives to GDP.

The task before us is daunting. The urgency is great. We can start with a society wide conversation much like the dialog we are having here today.

As WC Fields famously said, “There comes a time when we must seize the bull by the tail and stare the situation squarely in the face.”