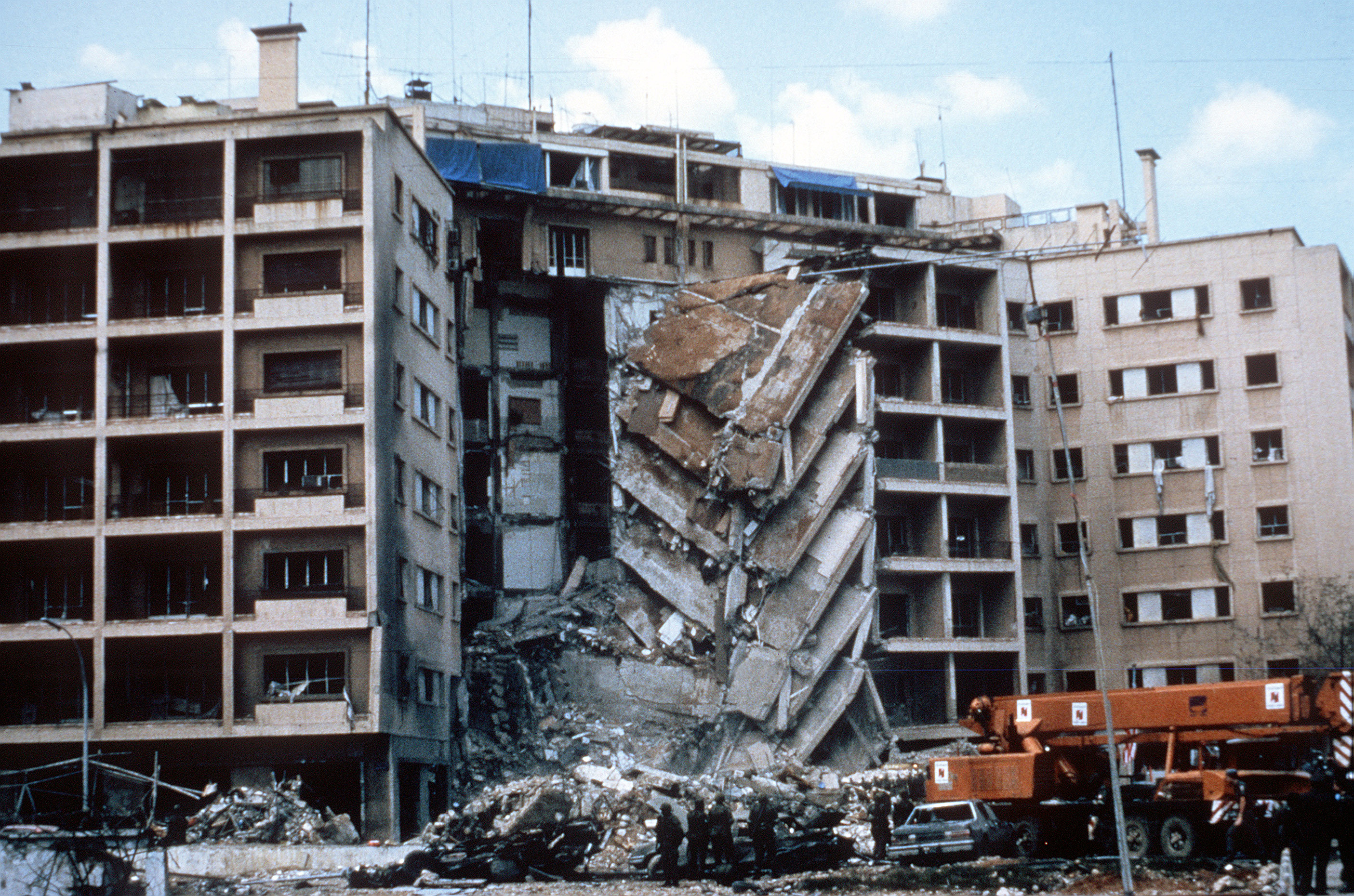 Possible Consequences of a U.S. Military Attack on Syria

Above: The April 18, 1983 United States embassy bombing was a suicide bombing in Beirut, Lebanon, that killed 63 people, mostly embassy and CIA staff members, several soldiers and one Marine.

Its 4am and I can’t sleep, just like 10 years ago when President Bush was telling the world that Saddam Hussein had weapons of mass destruction in Iraq and the United States must invade and occupy Iraq to rid humanity of these weapons. I didn’t believe President Bush ten years ago and I resigned as a U.S. diplomat.

Now a decade later, President Obama is telling the world that the use of chemical weapons in Syria by the Assad government must be answered by other weapons, even though the results of the UN inspection team have not been compiled—just as the Bush administration refused to wait for the UN report by the inspectors who had been looking for WMD in Iraq.

Secretary of State John Kerry pronounced that the UN inspectors “can’t tell us anything that we don’t already know.” President Obama says that any U.S. attack on the Assad government will be as punishment, not regime change. The strike will be “limited”—but tell that to the civilians who inevitably die when military attacks take place.

President Bush and his advisors either didn’t know or didn’t care about the probable consequences of their decision to invade and occupy Iraq:

(Although the U.S. invaded and occupied Afghanistan under a different rationale, I also want to acknowledge the Afghan citizens who have been killed or wounded in the U.S. war in Afghanistan.)

President Obama has not spelled out the possible consequences of a military attack on Syria, but U.S. military leaders are warning about the risks. In a letter to the Senate Armed Services committee, the chairman of the Joint Chiefs of Staff General Martin Dempsey wrote last month said, “As we weigh our options, we should be able to conclude with some confidence that use of force will move us toward the intended outcome.” “Once we take action, we should be prepared for what comes next. Deeper involvement is hard to avoid.”

General James Mattis, who retired recently as head of the U.S. Central Command, said last month at a security conference that the United States has “no moral obligation to do the impossible” in Syria. “If Americans take ownership of this, this is going to be a full-throated, very, very serious war.”

Possible Consequences of A U.S. Military Attack on Syria

As U.S. warships gather off the shores of Lebanon to launch Tomahawk Cruise missiles at targets in Syria, we can make some educated guesses of what the “unintended consequences” could be:

30 Years Ago, U.S. Warships Bombed Lebanon and the U.S. Marine Barracks in Beirut Was Blown Up in Retaliation

At this time of crisis, it is worth remembering another time, 30 years ago in October, 1983 when U.S. warships bombarded Lebanon, the country located next to Syria. Within weeks, the U.S. Marine barracks in Beirut was blown up by a massive truck bomb that killed 241 American servicemen: 220 Marines, 18 sailors and three soldiers. The truck driver- suicide bomber was an Iranian national named Ismail Ascari whose truck contained explosives that were the equivalent of 21,000 pounds of TNT. Two minutes later a second suicide bomber drove a truck filled with explosives into the French military compound in Beirut killing 58 French paratroopers. France is the only country standing with the Obama administration on a military strike on Syria.

Earlier in the year, on April 18, 1983, the U.S. Embassy in Beirut had been blown up by another suicide driver with 900 pounds of explosives that killed 63 people, 17 Americans, mostly embassy and CIA staff members, several soldiers and one Marine, 34 Lebanese employees of the US Embassy and 12 Embassy visitors. It was the deadliest attack on a U.S. diplomatic mission up to that time, and marked the beginning of anti-U.S. attacks by Islamist groups.

The U.S. and French military were in Lebanon as a part of a Multi-National force after the PLO left Lebanon following the 1982 Israeli invasion of Lebanon. ostensibly to create a 40 km buffer zone between the PLO and Syrian forces in Lebanon and Israel. The Israeli invasion was tacitly approved by the U.S., and the U.S. provided overt military support to Israel in the form of arms and material.

Colonel Timothy J. Geraghty, the commander of the U.S. 24th Marine Amphibious Unit (MAU) deployed as peacekeepers in Beirut, said that the American and the French headquarters were targeted primarily because of “who we were and what we represented…It is noteworthy that the United States provided direct naval gunfire support [which fired a total of 360 5-inch rounds between 10:04 A.M. and 3:00 PM.] — which I strongly opposed for a week — to the Lebanese Army at a mountain village called Suq-al-Garb on September 19 and that the French conducted an air strike on September 23 in the Bekaa Valley. American support removed any lingering doubts of our neutrality, and I stated to my staff at the time that we were going to pay in blood for this decision.”

Some of the circumstances around the incidents in Lebanon in 1983 and now thirty years later in Syria are familiar. U.S. intelligence agencies were aware of potential trouble but did not report the problems in sufficient time for actions to be taken. President Obama said that the U.S. had intercepted signals indicating the Syrian government was moving equipment into place for an attack, but the U.S. did not warn the Syrian government that the U.S. knew what was happening and did not warn civilians that a chemical attack was imminent.

Thirty years before, on September 26, 1983, “the National Security Agency (NSA) intercepted an Iranian diplomatic communications message from the Iranian intelligence agency, the Ministry of Information and Security (MOIS),” to its ambassador, Ali Akbar Mohtashemi, in Damascus. The message directed the ambassador to “take spectacular action against the American Marines.” The intercepted message, dated September 26, was not passed to the Marines until a month later on October 26: three days after the bombing.

Geraghty wrote 20 years later, “ The coordinated dual suicide attacks, supported, planned, organized, and financed by Iran and Syria using Shiite proxies, achieved their strategic goal: the withdrawal of the multinational force from Lebanon and a dramatic change in U.S. national policy. The synchronized attacks that morning killed 299 U.S. and French peacekeepers and wounded scores more. The cost to the Iranian/Syrian-supported operation was two suicide bombers dead.”

“What is the political end state we’re trying to achieve?” said a retired senior officer involved in Middle East operational planning who said his concerns are widely shared by active-duty military leaders. “I don’t know what it is. We say it’s not regime change. If it’s punishment, there are other ways to punish.” The former senior officer said that those who are expressing alarm at the risks inherent in the plan “are not being heard other than in a pro-forma manner.”

Letter from former U.S. government officials appealing to Chairman of the Joint Chiefs General Dempsey not to obey an illegal order to attack Syria

As Obama administration lawyers in the Justice and State Departments frantically write classified legal opinions to provide legal protection for whatever action the President decides on, others are calling for military officers to look to their constitutional responsibilities.

“We refer to your acknowledgment, in your letter of July 19 to Sen. Carl Levin on Syria, that a “decision to use force is not one that any of us takes lightly. It is no less than an act of war.” It appears that the President may order such an act of war without proper Congressional authorization.

As seasoned intelligence and military professionals solemnly sworn to support and defend the Constitution of the United States, we have long been aware that – from private to general – it is one’s duty not to obey an illegal order. If such were given, the honorable thing would be to resign, rather than be complicit.”

This work is licensed under a Creative Commons Attribution-Share Alike 3.0 License

Ann Wright is a 29 year US Army/Army Reserves veteran who retired as a Colonel and a former US diplomat who resigned in March, 2003 in opposition to the war on Iraq.  She served in Nicaragua, Grenada, Somalia, Uzbekistan, Kyrgyzstan, Sierra Leone, Micronesia and Mongolia.  In December, 2001 she was on the small team that reopened the US Embassy in Kabul, Afghanistan.  She is the co-author of the book “Dissent: Voices of Conscience.”  (www.voicesofconscience.com)