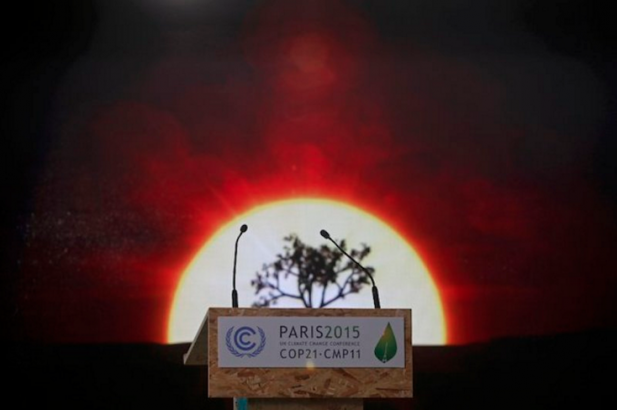 Post-Game Thoughts On The Paris Talks

The Paris climate talks are over, and the postmortems on the final agreement are flooding in. Here’s our take:

We believe humanity can still prevent civilization-destroying global warming – but only if we undertake a WWII-scale Climate Mobilization to restore a safe climate starting immediately. We need to transition off fossil fuels and carbon-intensive agriculture as soon as humanly possible. That means an emergency restructuring of the entire economy at wartime speed to achieve net zero emissions in the U.S. by 2025, net zero emissions globally by 2030, as well as an urgent effort to draw down the excess carbon dioxide that has accumulated in the atmosphere since the Industrial Revolution.

Take the Mobilization Pledge here and urge your elected represenatives to take the pledge.

We are championing a WWII-scale Climate Mobilization every day and we believe it is more important than ever. Please consider supporting our efforts financially.

Unfortunately, President Obama and American climate negotiators at the Paris talks did not heed our open letter that so many of you signed calling on the U.S. to champion a Mobilization that drives the U.S. economy to zero emissions by 2025.

However, there are heartening signs that the public discussion is turning toward the need for a lightning-fast mobilization of the economy.

In The Guardian yesterday, Bill McKibben characterized the pace of the transition as “the only important question” in the wake of the Paris talks: “Our only hope is to decisively pick up the pace. In fact, pace is now the key word for climate…We know where we’re going now; no one can doubt that the fossil fuel age has finally begun to wane, and that the sun is now shining on, well, solar. But the question, the only important question, is: how fast.”

Attempting to answer that question in a fantastic front page piece for The New York Times, climate change reporter Justin Gillis interviewed scientists and found that a target of zero emissions globally by 2030 could potentially limit global warming to 1.5°C:

“A serious campaign to meet the more ambitious goal would mean that in less than two decades, the nations of the world would likely have to bring an end to gasoline cars, to coal- or gas-burning power plants in their current form, and to planes or ships powered by fossil fuels.”

Similarly, a group of scientists writing in The Hindu found that developed countries such as the U.S. would need to reach zero emissions in “the next 5-10 years” for a 50 to 66 percent chance of limiting warming to 1.5°C. Those aren’t very good odds, either!

There is no conceivable way to achieve such a quick transition to zero emissions only using market-based mechanisms such as carbon pricing. Only a wartime-style mobilization, in which government regulation mandates the early retirement or conversion to zero emissions of all greenhouse-gas emitting plant and equipment, could possibly facilitate such drastic changes on such a tight time-frame without crashing the economy.

In fact, that’s exactly what Gillis concluded in a Dec. 15, 2014 news analysis, in which he wrote that the only conceivable way to stabilize temperatures even lower than the now discredited 2°C “guardrail” would be through either “a technological miracle, or a mobilization of society on a scale unprecedented in peacetime.”

We are not aware of any other campaign calling for zero emissions by 2025 in the U.S. or zero emissions globally by 2030 through a wartime-style mobilization. Unless we have missed something, The Climate Mobilization is literally the only campaign on earth calling for action that has a chance of saving our climate and our civilization. Don’t take it from us – just pick up The New York Times!

Take the Mobilization Pledge here and urge your elected represenatives to take the pledge.

Please consider getting more involved in this campaign. Join us on a Thursday night organizing call. Take another look at our manifesto, “The Transformative Power of Climate Truth.” Start a campaign for Climate Mobilization in your congressional district by sending our modifiable cover letter & executive summary to your congressional representative. Support our work with a donation.

We need to turn this into an enormous grassroots movement, and we need to do it quickly. We need to bring the rest of the environmental movement and the American people on board with the call for Climate Mobilization NOW! If we succeed, we will be heroes.