Note: Public Citizen’s report on how the Trump administration has reduced enforcement of corporate crime continues a long time bi-partisan problem of allowing corporations and the wealthy to commit crimes, crash the economy and steal from the public without prosecution or any serious enforcement of the law. While the report makes clear that under Trump, who they describe as a law and order president other areas, has reduced prosecution of corporate crime, this is not a new problem.

The report found that in 11 of the 12 federal agencies led by a Trump-appointed official during the president’s first year, penalties imposed on corporate violators dropped, in the majority of cases by more than 50 percent.

Penalties dropped at the Justice Department by 90 percent, the Commodity Futures Trading Commission by 80 percent and the Securities and Exchange Commission by 68 percent.

The largest drop was at the Environmental Protection Agency, formerly led by Scott Pruitt, where overall penalties dropped by 94 percent, from nearly $24 billion in President Barack Obama’s last year in office to $1.5 billion. Penalties at the Federal Communications Commission dropped overall by 85 percent.

Trump’s lack of corporate crime enforcement builds on his predecessor’s behavior. When Wall Street caused a worldwide recession at the end of the Bush presidency in 2008, Bush began the bailout, President Obama came into office and continued it while not prosecuting bankers who committed an array of crimes, e.g. toxic mortgages, rigging credit agencies, money laundering for drug cartels, insider trading. When banks were investigated cases were settled at a cost of pennies on the dollar and without any admission of guilt. While the Department of Treasury bailout was $700 billion, when combined with the Federal Reserve banks received a total commitment of $16.8 trillion, that is trillions not billions. The banks who crashed the economy are now larger, control more of the economy and still too big to fail. Rather than being bailed out and given immunity from prosecution, the CEOs and top managers of the banks need to be held criminally liable for breaking the law and fear going to jail.

Public Citizen’s President Robert Weissman said, “The message to big business couldn’t be more clear: feel free to run roughshod over rules that protect the air we breathe, the water we drink, and the food we eat, as well as ensure the safety of the cars we drive and protect us against bank rip-offs and consumer fraud.”  KZ

‘Law And Order’ Trump Is Soft On Corporate Crime And Wrongdoing

In the “tough on crime” story President Donald Trump likes to tell about himself, he’s a “law and order” tough guy fighting to save “the forgotten men and women” from the scourge of “American carnage.”

But even as the Trump administration ramps up “zero-tolerance” policies against street crimes and immigration, it has gone soft on enforcement policies that protect Americans from lawbreaking corporations.

“Corporate Impunity,” a new Public Citizen report, finds that in 11 of 12 agencies led by a Trump administration official for most of 2017, total monetary penalties imposed on corporate violators plummeted.

At the Department of Justice (DOJ), penalties against corporate offenders plunged by 90 percent. 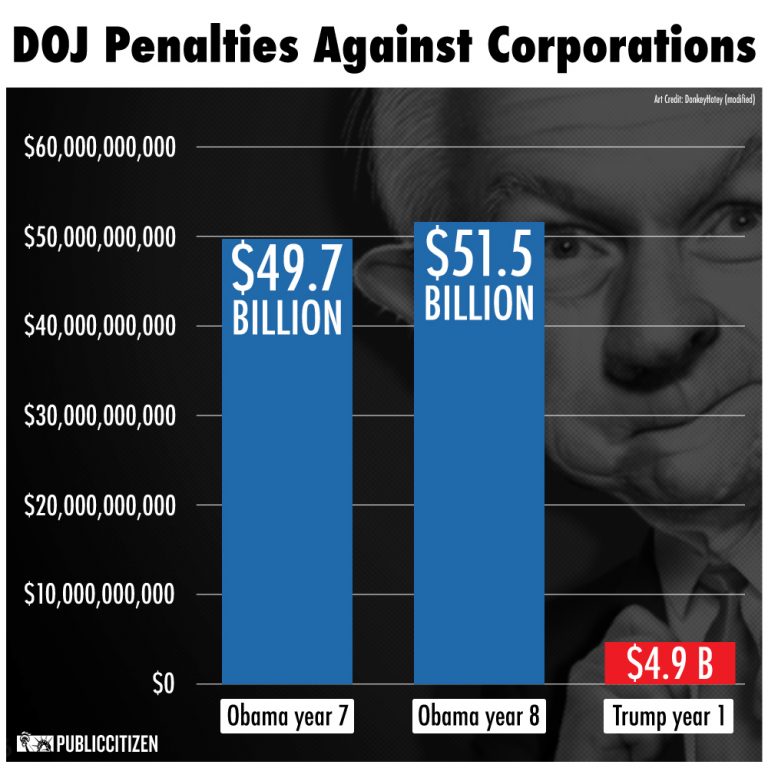 At the Environmental Protection Agency (EPA), all civil penalties plunged more than 94 percent. 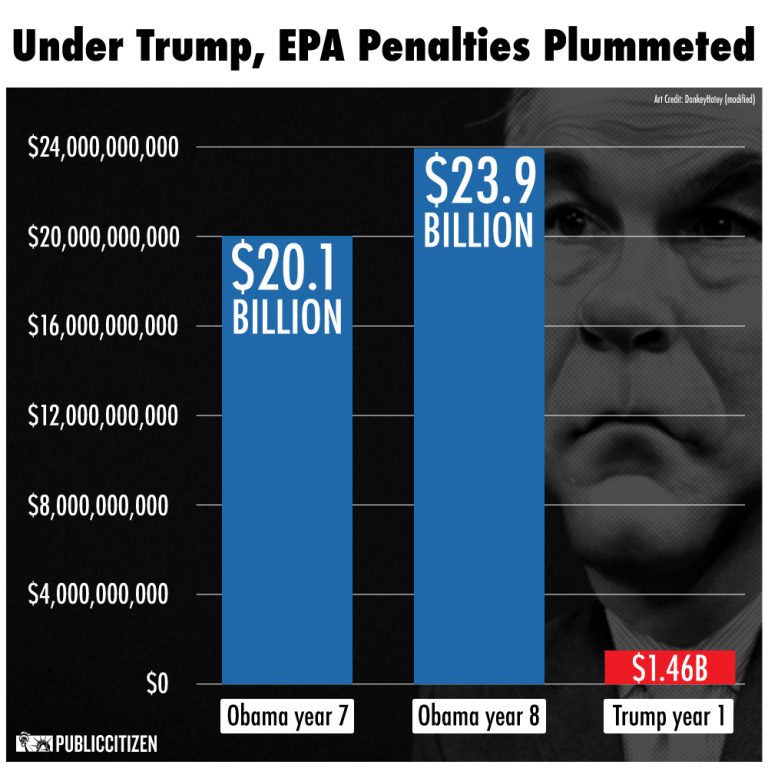 Similarly, in 10 out of the 12 agencies Public Citizen analyzed, the number of enforcement actions against corporate violators declined – in many cases quite dramatically. At the Transportation Department’s Aviation Consumer Protection Division, Consumer Product Safety Commission, Federal Trade Commission and Securities and Exchange Commission, the total number of enforcement actions brought against corporate wrongdoers declined by a third or more. 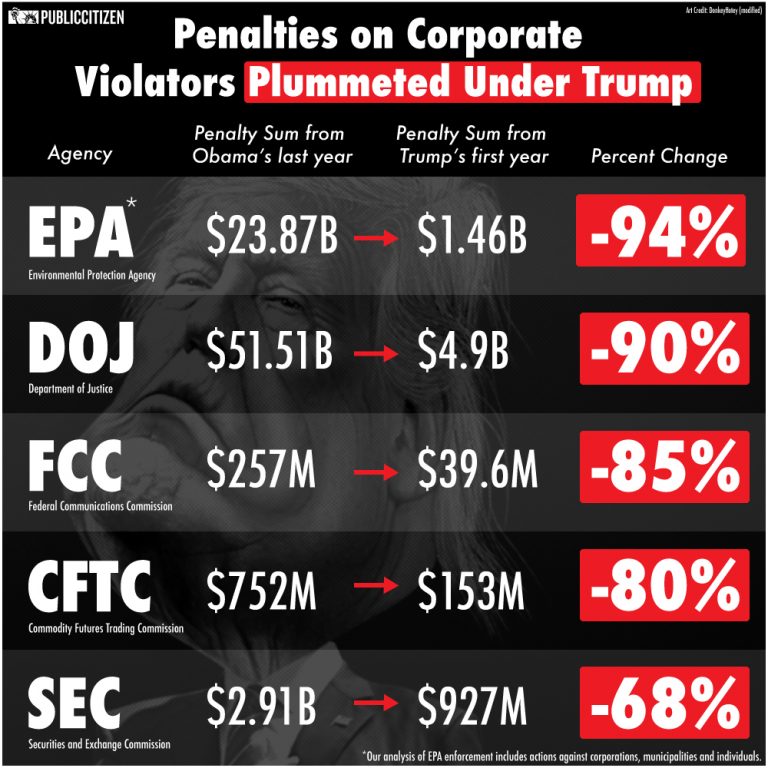 The only one of these agencies at which penalties increased was the Treasury Department’s Office of Foreign Assets Control, which is responsible for blocking corporations from doing business with sanctioned countries, businesses and individuals.

The report was released in partnership with the Corporate Research Project of Good Jobs First, whose Violation Tracker database documents penalties the federal government imposes on corporate offenders.

As the federal government’s chief law enforcement agency, the DOJ is especially powerful when it comes to setting enforcement policy. Attorney General Jeff Sessions’ “zero tolerance” approach to immigration and street crimes has been widely reported. What has garnered less scrutiny is the DOJ’s maximum permissiveness policy toward corporate offenders.

Under Trump, the DOJ has:

The impact of these policies is predictable: The longer they are in place, the fewer corporate criminals and wrongdoers will be held accountable.

The rampant corporate crimes and wrongdoing cause real harm to Americans who are ripped off by banks, poisoned by polluters, deceived by drugmakers and have their data stolen and exploited by tech monopolies.

Public Citizen aims to amplify these concerns and ensure that corporations that put profits over people are held accountable.