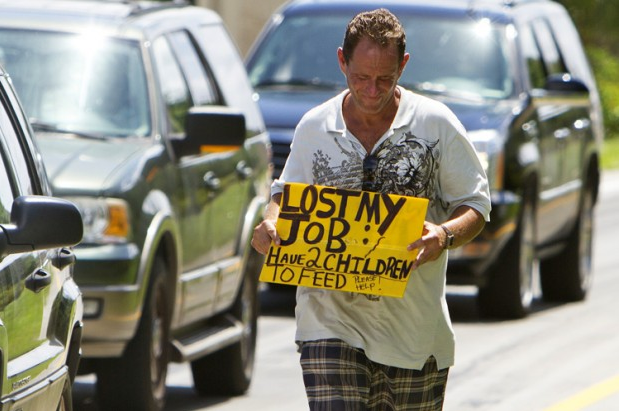 Poverty: The Crisis US Media And Politics Refuses To Discuss

Above Photo: A man who did not wish to be identified, who lost his job two months ago after being hurt on the job, works to collect money for his family on a Miami street corner (Credit: AP/J Pat Carter)

Even with Bernie Sanders squarely in the running, campaign coverage is far likelier to talk terrorism than poverty

Of the five Republican debates and of the three Democratic debates, not one moderator has askeda question involving the words “poverty” or “poor.” While the subject has been touched upon by some of the Democratic candidates, namely Bernie Sanders and briefly Jim Webb, the topic has been entirely unmentioned by the moderators during the three Democratic debates. In the GOP debates, the candidates only bring up the topic as a way to swipe President Obama, which is fair enough but is not a discussion of poverty much less a good-faith attempt to mitigate it. By comparison, the Democratic debate moderators brought up “ISIS” or “Terrorism” 21 times total in all three debates.

A recent study in The Intercept found poverty’s non-status on television isn’t just limited to the debates. Cable news was over 20 times more likely to mention ISIS or terrorism than poverty during the heart of primary season in late 2014.

Bernie Sanders has brought up poverty in the debates about half a dozen times, calling childhood poverty “a national disgrace.” Hillary Clinton has not brought up the issue in the debates, though she frequently tweets about it. This is partly not the candidates’ fault: if they’re not asked the question they can’t really discuss the topic. To the extent discussions of poverty are jammed into a response it’s part of a much broader answer about the economic problems America is facing.

Despite some economic progress since the recession of 2008-’09, the poverty rate remains stubbornly immovable. To exacerbate the problem, an increasingly cruel GOP Congress has slashed billions from the government food stamp program and ended unemployment benefits. Poverty is particularly bad for single mothers. One-third of families led by single mothers lived below the poverty line in 2013—or 15.6 million Americans.

One recent study linked poverty to diminished IQ in children. It impacts childhood education, crime and even future economic gains. A 2011 study attributed 133,000 deaths a year to poverty-related illnesses.

Islamic terrorism, by contrast, has less of a chance of killing someone than bee stings or furniture. Only 45 Americans have been killed since 9/11 as a result of al-Qaeda or ISIL-inspired attacks.

It’s not as if the candidates don’t mention poverty on their websites and in speeches. Both Clinton and Sanders bring up the topic. Sanders’ website leads with the issue at the time of publication, albeit with the superfluous “who works 40 hours a week” qualifier:

So why has not a single debate moderator mentioned poverty? Those working for votes like Sanders, and to a lesser extent Clinton, have proposals for it, but not one of the hundreds of debate questions has been on the issue of poverty.

Aside from the fact that the class interests of those who run our media and work in it are overwhelmingly wealthy, if not overtly anti-poor, the topic has no doubt been bumped even lower on the priority list due to recent ISIS fears. As The Intercept notes, in the wake of the Paris attacks, terrorism and ISIS are 2,344% more likely to get mentioned on CNN than poverty.

Bringing up the issue of poverty to the debates’ sizable audience isn’t superficial: a 2012 study by Fairness and Accuracy in Reporting found that cable news mentions of key topics like inequality were inextricably linked to their coverage of Occupy Wall Street. The national conversation follows political dialogue and priority is given to those issues highlighted by our political class.

It took over a year of sustained protest and direction action by Black Lives Matter to get major candidates to discuss racism and criminal justice reform. Without a similar effort to draw attention to poverty, it’s unlikely poverty will ever register a blip on the corporate media’s radar, much less be of primary concern. While candidates like Sanders do their best to bring the topic up, without a clear question to all the candidates, there’s very little poor Americans can take away from the exchange beyond platitudes.

When it comes to the economy, candidates often talk in abstractions like “job creators,” “growth” and the nebulous “middle class,” but poverty is a clear and quantifiable metric for a civilized society. Poverty is objective, measurable and its rates among Americans, specifically American children, is a manifest clear-as-day national scourge. One would think if debate moderators have time to ask aboutfantasy football and who a candidate’s favorite “enemy” is, they could squeeze in just one question specifically addressing the needs of those living below the poverty line and how the candidates plan on ameliorating the suffering of 45 million people.