Since the DOJ seems determined to press charges against Assange, indict him and continue to hold a grand jury against him, I think it is time for his supporters to contact President Trump about a preemptive pardon. What is that you say? Well let me explain.

Since the DOJ seems determined to press charges against Assange, indict him and continue to hold a grand jury against him, I think it is time for his supporters to contact President Trump about a preemptive pardon. What is that you say? Well let me explain.

The word preemptive according dictionary.com is:

taken as a measure against something possible, anticipated, or feared; preventive; deterrent:

And the definition according to the same site for pardon is:

So in other words, a preemptive pardon would dismiss any anticipated charges against Julian and would then allow him to be free due to the fact there would be no extradition once he walked out of the Embassy.

Why do we need this you ask? Let me explain, since the leaks Manning released to Wikileaks the United States has sought to arrest Julian on charges of spying and several other items. The government is obviously not going to drop this matter themselves and by Trump issuing this pardon, it would make any charges null and void. Assange would be a free man!

Another reason I feel Assange deserves this is because Obama (for whatever reason) has already gave clemency to Manning for his crimes, so why is government still seeking to indite the publisher of the leaks? If other media outlets are not prosecuted for publishing leaks sent to them, why is government still pursuing charges against Wikileaks? Simply put, Wikileaks never committed a crime to begin with and just exercised it’s right to freedom of speech and free press as outlined in the First Amendment of the Constitution.

When the party who delivered the original documents to the publisher has been pardoned, it makes no sense to go after the one who published! 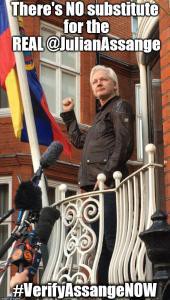 Recently, a US Congressman, @DanaRohrabacher visited Assange in the embassy and discussed proof of no Russian interference through the DNC leaks and Podesta emails and offered this proof. Rohrabacher agreed to deliver this information to President Trump himself. Also discussed was the following: 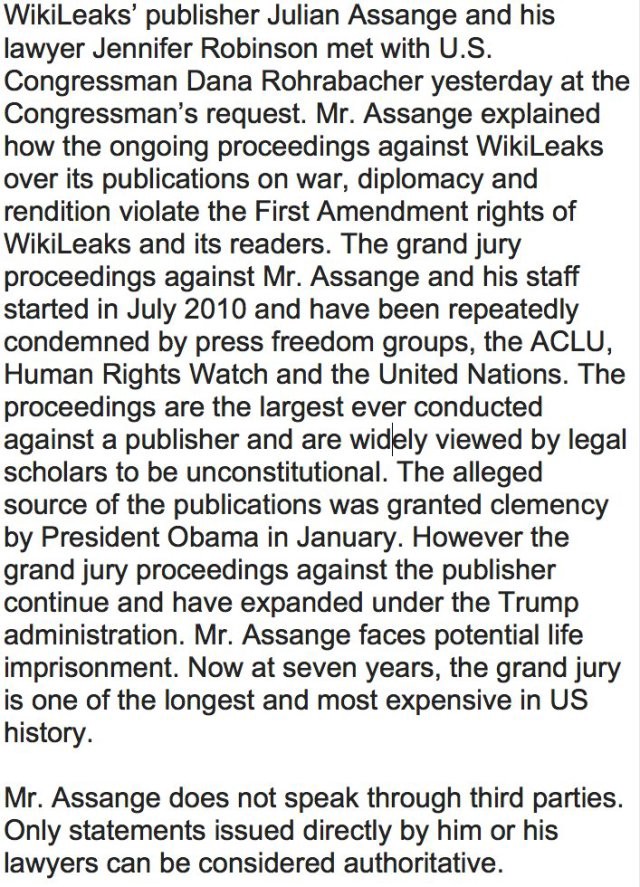 This was posted on @JulianAssange’s twitter page today. So please, if you could find it in your heart, write a letter to the President and request a preemptive pardon for Julian Assange and Wikileaks.

Here is the address and website for the President:

Here is a phone number to call and leave a message:

You can also donate to Julian’s legal fee at justice4assange.com or donate to Wikileaks at Wikileaks website . 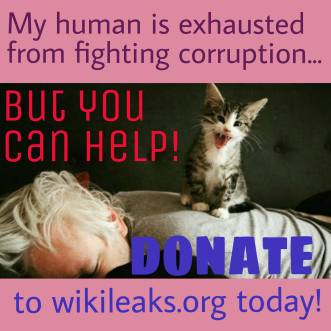