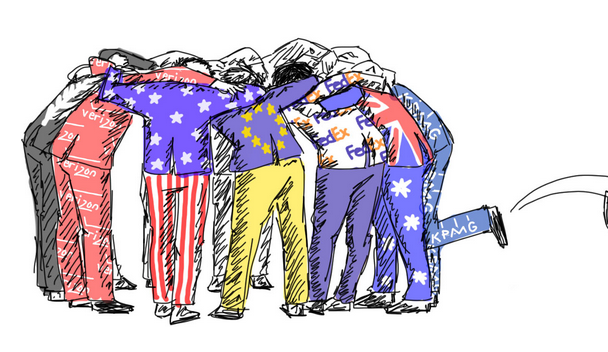 Prepare For TPP’s Big Brother: The Trade In Services Agreement

Note: Perhaps the worst of the three Obama trade agreements, the Trade in Services Agreement (TiSA), is rushing to completion. TiSA includes countries including the United States, the European Union, and 22 other nations from around the world, representing 70 percent of the world’s services’ trade. Services make up 80 percent of the US economy. This is a massive agreement, that will impact our lives in multiple ways. Once again it has been negotiated in secret, but there have been leaks so we know something about it. While the anti-corporate trade movement has been focused on the TPP, the Obama administration has been rushing to complete TiSa.

Not much is known about the Trade in Services Agreement, otherwise known as TISA. However the little that has been made public, or the little that has been leaked, has caused much concern. The Trans Pacific Partnership (TPP) pales in comparison to TISA and it makes  the Transatlantic Trade and Investment Partnership (TTIP) seem small. It is, however, most similar to the World Trade Organization (WTO). It is a massive “free trade” agreement that has been negotiated entirely in secret with 24 countries and the European Union. Altogether, TISA accounts for over 70 percent of world trade in services. You may be asking: “how does this affect me?” The best one sentence response I can come up with is: “how does this not affect you.”

Let’s start with the facts. All of the 24 countries involved in TISA are already members of the WTO. TISA is based on the WTO’s General Agreement on Trade in Services. TISA aims at opening up markets, opening up the borders to allow temporary legal statuses for professionals moving abroad to provide the services, and improving rules in e-commerce, financial services, and licensing.

How do we know this? First off, we know this information because of leaked texts and because the European Commission is trying to keep sometransparency for the EU by publishing summaries and Q&A’s. Otherwise, we wouldn’t know this even existed since in America our so called “trusted” leaders want to keep everything quiet.

This affects us because there are provisions in TISA that will affect our immigration policy. It will restrict how our governments can manage our public laws. And it will create a path for further corporate domination.

How? New Republic reports that under the agreement, “governments may not be able to regulate staff to patient ratios in hospitals, or ban fracking, or tighten safety controls on airlines, or refuse accreditation to schools and universities. Foreign corporations must receive the same “national treatment” as domestic ones, and could argue that such regulations violate their ability to provide the service. Allowable regulations could not be ‘more burdensome than necessary to ensure the quality of the service,’ according to TISA’s domestic regulation annex. No restrictions could be placed on foreign investment—corporations could control entire sectors.”

Wait: foreign corporations must receive the same national treatment as domestic ones? Since when do we allow foreign countries and foreign companies dictate what we must or must not do? Thanks to Investor State Dispute Settlements (ISDS), we have officially given up our democracy to foreign entities.

Investor State Dispute Settlements (ISDS) are one of the most dangerous yet least talked about parts in recent trade agreements. It essentially trumps over any federal, state, and local U.S. regulation that is deemed “a trade barrier” and strips us from the sovereign right to govern our own affairs. ISDS enables foreign corporations to sue a host country for laws, policies, even court decisions that they find inconvenient and trade impeding. Any corporation could sue our government for loss of its future profits.

As mentioned before, all of this is being negotiated in secret. Not even our own elected officials are allowed to sit in on TISA meetings! In fact, many don’t even know TISA exists. Those in favor claim that TISA’s goal is to open up trade in services between the nations. But did they forget that that’s why the WTO exists?

TPP & TTIP Are Bad Enough, But TISA Is Catastrophic …