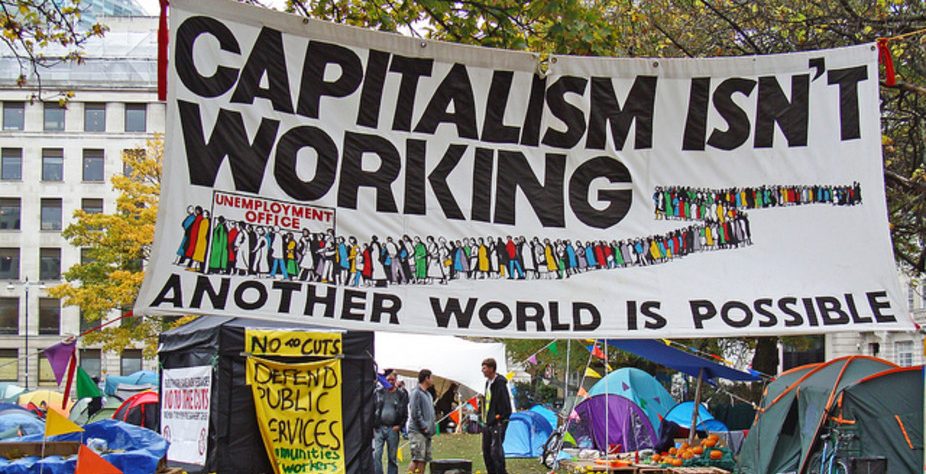 Preparing For The Storm With A New Economy

For the past few weeks, we’ve focused on the era of transformation that we anticipate will occur over the next decade as the multiple crises we face reach levels that cannot be ignored. A perfect storm is brewing, so to speak, as climate change becomes more severe, the United States’ status in the world falls and the risk of another recession looms. We have the best chance of weathering this storm if we prepare for it now.

Just as we must end the extraction of fossil fuels and minerals from the Earth to lessen the impacts of climate change and stop the poisoning of our communities, we must also end the extraction of wealth from our communities. A democratized economy, described in greater depth on It’s Our Economy, gives more control over and benefit from the economy to people and reduces the wealth divide. This week, we highlight work that is being done in the United States and other countries to transform economic institutions so they serve people and protect the planet. 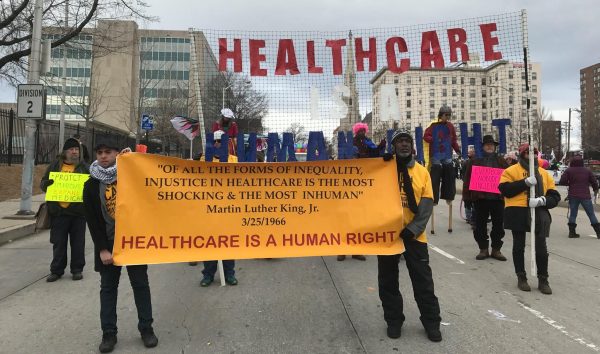 Dr. Martin Luther King, Jr., focused the latter part of his life on making connections between what he called “the triple evils” of poverty, racism and war. To mark his day of celebration, municipal workers in North Carolina launched a campaign to fight for better wages and work protections. It is illegal for public workers to bargain collectively in North Carolina, but they are organizing for a worker Bill of Rights anyway.

Prisoners in eight Florida prisons started a thirty day work strike to protest extremely low wages, high prices for necessities and parole policies. They are asking for people to organize actions in solidarity with their struggle throughout the US.

We can add the demand to end mass incarceration because there are better alternatives. Norway, a country with severe drug laws, has admitted that the drug war has failed and is decriminalizing drug use. This opens the door to other evidence-based harm reduction policies to address addiction effectively, which would also be beneficial in the US. A new report, which looks at state-based criminal justice reform, found the ten states that reduced their prison populations the most also reduced crime the most.

This past Monday, we marched in our local Martin Luther King Parade with the Health Care is a Human Right contingent. The US Human Rights Network celebrated the holiday by releasing its 2017 Status Report on the United States, “Advancing Human Rights.” This report covers human rights abuses in the US, international laws that may have been violated, and recommends demands to address these issues. It is a useful tool for activists.

We are still fighting the triple evils, caused in part by the extraction economy. For example, cities are currently competing to be the site of the next Amazon headquarters by offering tax breaks, infrastructure and other incentives. Big businesses like Amazon are another example of extraction. Not only does the extraction economy rob public money from the residents that could be used for necessities, but it also brings in an outside entity whose dollars will go to other outside entities, not local ones, for the services it uses.

There is a reason that Jeff Bezos, the owner of Amazon, is the richest person in the history of the world. Margaret Kimberley, of Black Agenda Report, writes, “In a Bezos run world every worker will be impoverished, every level of government will subsidize corporations, and anyone who speaks out will be discredited and under surveillance.” 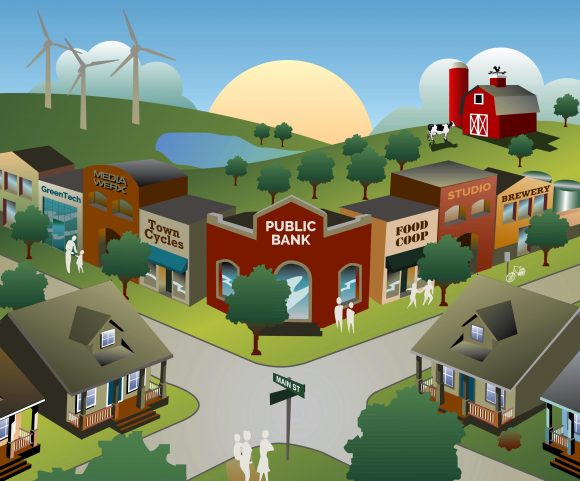 Instead of the traditional extractive “Amazon” model of city development, the Democracy Collaborative offers a community model that works to build and maintain wealth within the community. One of the foundations of the model is democratized ownership, which comes in many forms.

Land trusts, for example, were started by the civil rights movement in the South in the 1960s to create public ownership of land that protected black sharecroppers. They are still used today to guarantee that the public has control of land use and to protect homeowners from wide fluctuations in housing prices.

Another way to protect and build affordable housing is through a public bank. Public banks, such as the state bank of North Dakota, hold public dollars instead of depositing them in Wall Street banks. They save millions of dollars in fees and those dollars can be used to benefit the community by lending money for large projects and by partnering with local banks to provide low-cost loans for housing, essential projects and businesses. Public banks work for the public interest, not for the profit of shareholders and big executive salaries.

Co-operatives (co-ops), organized by workers or buyers, are another form of democratized ownership. Finland has been developing their cooperative model for decades. There are more member-owners of co-operative enterprises in Finland than there are people; the average adult is a member of two co-operatives. A Finnish Nobel Prize winning scientist, A I Vertanen, described it as an economy based on mutuality: “We have no Rockefellers or Carnegies, but we do have co-operatives.” Co-ops cover different services, including food, petrol, broadband, banking and more.

Ted Trainer writes that cooperatives are an example of “The Simpler Way transition strategy … which is primarily about going underneath the conventional economy to build our own new collective economy to meet community needs, turning our backs on and deliberately undermining and eventually replacing both the capitalist system and control by the state.”

Trainer describes the Catalan Integral Cooperative where people do not wait for the government to save them, but take control over their own fate, setting up their own productive arrangements for food supply systems,  shops, basic income, information, education and even an investment bank. They are creating a collectivist world view and spirit to prevent the market and profit from driving the economy and establishing cooperative arrangements to benefit all people, not just co-op members. Rather than a socialist approach of the state-run institutions, people create and manage their own programs.

The city of Barcelona is going even further to support democratized institutions by investing in open source software. They plan to eventually free themselves of Microsoft.

Cities can also create their own broadband services. A new study found that municipal broadband is not only cheaper, but it is higher quality. With municipal-owned Internet services, communities are also free from the control of giant telecoms like Comcast and Verizon. They can protect net neutrality and make sure that all people have access to the Internet. This is a way to respond to new FCC rules that ended net neutrality and the Lifeline program, which subsidizes the cost of Internet access. 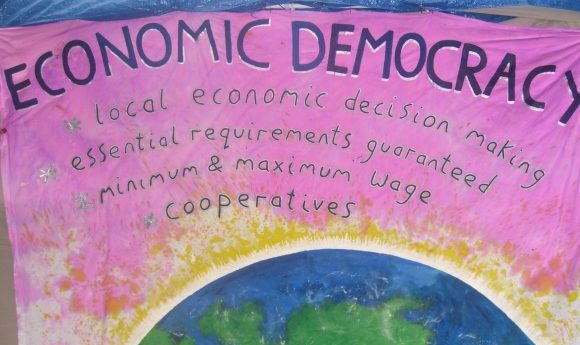 According to Community-Wealth.org there are 29,284 cooperatives (excluding housing) across the U.S. operating within a range of diverse industries, including banking (credit unions), agriculture, utilities, and child care. There are 350 million members of cooperatives who create 356,000 jobs and $653 billion in revenue. And, 1.2 million families live in cooperative housing. Cooperatives are more common than many people in the United States are aware.

Seymour Melman, a scholar who wrote in the second half of the Twentieth Century about demilitarizing the economy, worker rights through cooperatives and other aspects of a new economy, viewed cooperatives as a step to empowering people to remake the economy and politics. Jonathan Feldman writes Melman believed that “once cooperatives reached a certain scale, they would act as a kind of lobbying system to redirect the political culture to more productive and sustainable pursuits as opposed to predatory, militaristic and ecocidal ones.”

“Creating the new world” is an essential piece of the two-part strategy to shift political power. We must organize to resist harmful policies and projects such as the drug war and fossil fuel infrastructure and we must build alternative systems to replace the current extractive and exploitative systems. By building community wealth through democratized institutions, we also reduce the wealth divide and reduce the influence of big money over our lives. Collectively, we can take effective action to end the triple evils in a lasting way.