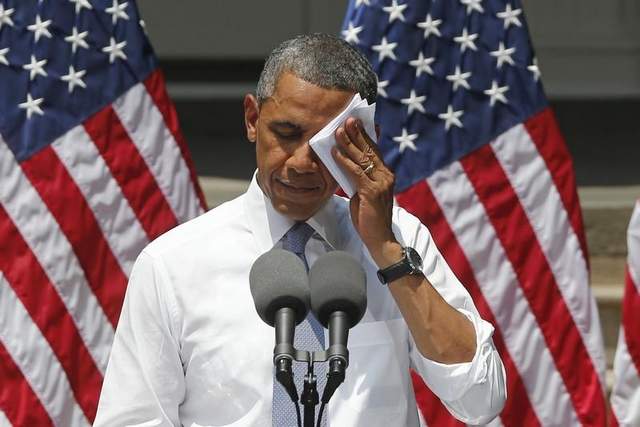 President Obama Continues ‘All of the Above’; Renewable Energy Focus Needed

Environmentalists warn that President Obama’s ‘climate plan‘—announced Tuesday in a speech at Georgetown University—does not contain the urgency required by the fast-spiraling crisis of global warming and climate change and that though some aspects were welcome, the overall approach falls well short of what’s needed.

The plan hinges on Obama’s claim that he plans to use his presidential powers to override a Congress under ‘partisan deadlock’ and order the Environmental Protection Agency to impose carbon emissions limits on current and new power plants.

Though many of the large green groups in the US praised the push for tighter regulation on coal plants by the EPA, critics say Obama’s plan is unclear about exactly how strict these regulations will be. As an example, the president’s plan says that the EPA must be “flexible” to states’ needs, a vague directive that critics charge provides rhetorical cover for further inaction.

Furthermore, critics charge that “new” power plant regulations are hardly groundbreaking or far-reaching enough to meet the demands of the crisis. The 2007 Clean Air Act already empowered the EPA to regulate emissions for new facilities, and yet this has done little to reign in power plant emissions, which account for approximately 40 percent of U.S. carbon emissions.

The president’s only new step on this front is to propose regulations for existing plants, but critics worry that an administration that has dragged its feet so far will not make the necessary headway.

“He promised today to do something, but there is zero guarantee that he will follow through,” declared Bill Snape, senior counsel to the Center for Biological Diversity. “In reality there are so many industrial sources that need to be regulated, and the administration has been moving very slowly on all of them. It is wise to not fall prey to the flowery rhetoric. You have to really specifically look at concrete action.”

Friends of the Earth welcomed aspects of the Obama approach but said it was not the “broad, ambitious plan that is needed to combat climate change and extreme weather,” but rather a more tepid “series of actions” joined by flowery rhetoric.

“A sensible climate plan,” said Damon Moglen, climate and energy program director of Friends of the Earth, “would include a renunciation of the president’s “all of the above” energy strategy, which promotes biofuels, so-called clean coal, natural gas and dirty and dangerous nuclear power.”

“In order to address climate change,” he continued, “the president needs to focus on the ambitious development of renewable energy, energy storage and efficiency technologies while setting us on a path which clearly leaves behind the fossil fuel-based energy economy of the 20th century.”

And Robert Weissman, president of Public Citizen agreed, saying that though Obama’s speech contained laudable elements there was too much that in the plan that would be “counterproductive.”

The important critique, Weissman said, was this:

Catastrophic climate change poses a near-existential threat to humanity. We need a national mobilization – and indeed a worldwide mobilization – to transform rapidly from our fossil fuel-reliant past and present to a clean energy future. We need a sense of urgency – indeed, emergency – massive investments, tough and specific standards and binding rules. Those elements, sadly, are missing from the president’s plan.

A sensible climate plan would include a renunciation of the president’s “all of the above” energy strategy, which promotes biofuels, so-called clean coal, natural gas and dirty and dangerous nuclear power. In order to address climate change, the president needs to focus on the ambitious development of renewable energy, energy storage and efficiency technologies while setting us on a path which clearly leaves behind the fossil fuel-based energy economy of the 20th century.

On the issue of the controversial Keystone XL pipeline, Obama remained nearly silent. He declared that the Administration would only move forward if it determines the pipeline is ‘in our national interest’ but did not respond to widespread demands that the project immediately halt.

President Obama’s energy policy has already been riddled with disasters, so it’s astounding that he would encourage even greater dependence on dangerous energy sources like oil drilling and nuclear power at a time when the risks have been made all too clear. For the millions of Americans put at risk by the inherent dangers of nuclear power, or those whose livelihoods have been destroyed by the Gulf oil disaster, more of the same is hardly the path toward ‘Energy Security.’ True leadership in the face of these disasters would mean setting out an energy plan that would move us away from our dependence on fossil fuels and dangerous nuclear power and instead harnessing abundant, safe and clean renewable energy.

President Obama declared that the United States must be a ‘global leader’ and work with the private industry to curb the carbon emissions of ‘developing’ nations. This is despite the factthat the Global North, with only 15 percent of the world’s population, accounts for 70 percent of greenhouse gases, and the U.S. is the second largest contributor to greenhouse gases in the world.

The president announced that he will stop providing federal dollars to build foreign coal-powered plants, unless they are ‘clean’ coal plants, or unless that country has no other viable energy option. Yet, critics charge that the concept of ‘clean’ coal is a myth.

His focus on fossil fuel exports – including the explicit promotion of LNG (liquefied natural gas) and his failure to curtail coal exports – threatens to undo the positive elements of the plan. By promoting LNG, the administration is moving full-speed-ahead on fracking, with no mention of how to control fugitive emissions, water contamination and other environmental problems posed by the controversial process.

The president appeared to embrace the role of private industry in curbing environmental disaster, praising large multinationals including WalMart and General Motors for ‘voluntarily’ decreasing their carbon emissions.

While many environmental groups expressed skepticism that the president’s plan will bring about real change, they praised broad, global social movements for pushing the debate even this far.

“We’re happy to see the president finally addressing climate change but the plain truth is that what he’s proposing isn’t big enough, and doesn’t move fast enough, to match the terrifying magnitude of the climate crisis,” said Snape.