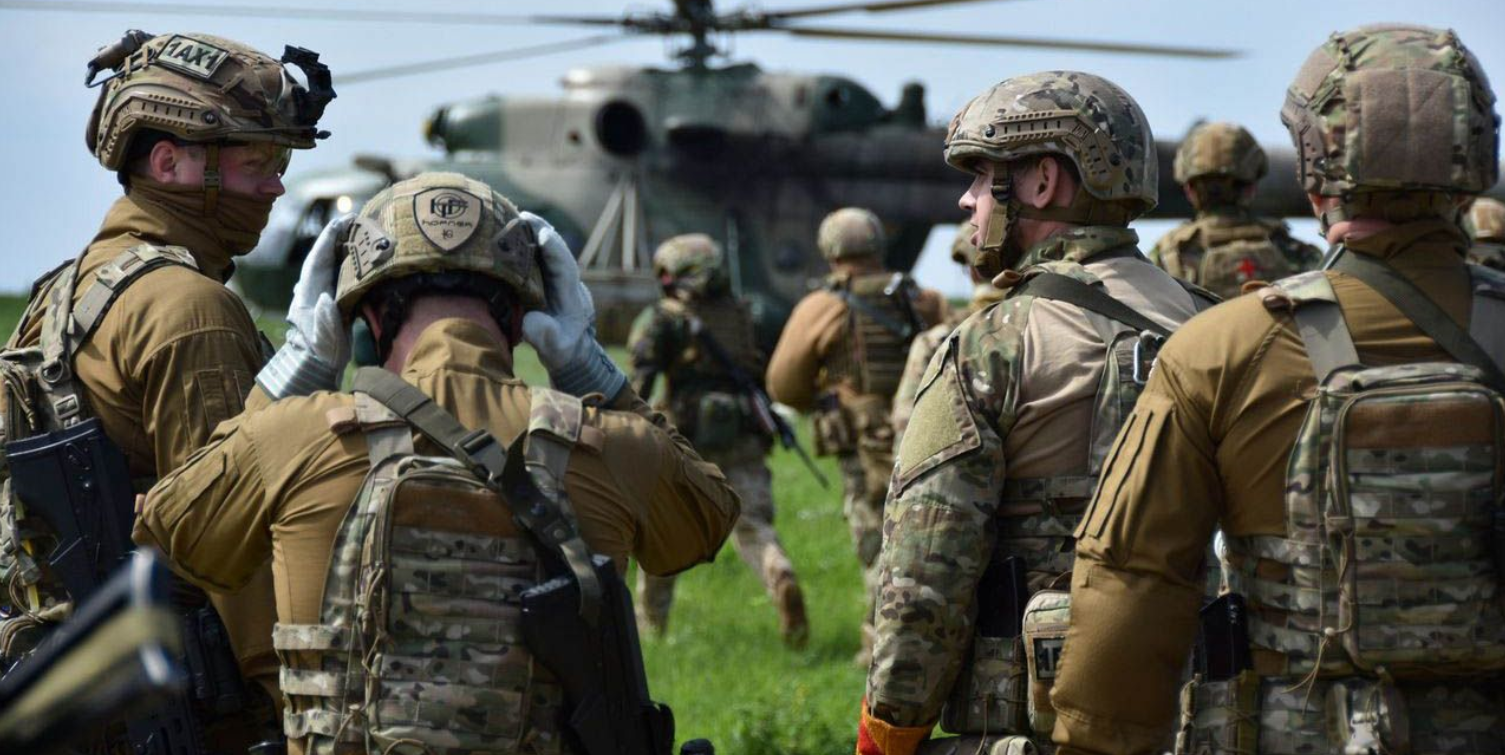 Above photo: SSO fighters of the Armed Forces of Ukraine during training. Wikipedia/ArmyInform.

Amid mounting tensions in the Black Sea region, President Volodymyr Zelensky declared on Tuesday night that Ukraine is “ready” for war with Russia. He warned that the country would “stand to the last man” in the event of a war.

Zelensky also signed a law allowing the Ukrainian army to mobilize its reservists without notice within 24 hours. Those avoiding the draft will be subject to criminal prosecution. The new law had been proposed by the Ukrainian General Staff.

On Wednesday, the Russian press reported that two NATO aircraft, an American P-8A Poseidon and a British RC-135W, and an American drone had conducted reconnaissance flights for several hours near the Crimean Peninsula in the Black Sea.

A French military aircraft carrier was spotted off the Romanian Black Sea coast, and several NATO aircraft carriers took off over Estonia, Latvia and Poland on Tuesday to intercept and escort Russian reconnaissance aircraft, fighters and bombers over the Baltic Sea. On April 19, Ukraine and NATO-member Romania had conducted joint military exercises in the Black Sea.

The Nezavisimaya Gazeta reported that more than 20 American F-16 and F-15 fighters had been suddenly deployed from the UK to Poland. It quoted a Russian military expert who indicated that two American missile destroyers, USS Donald Cook and USS Roosevelt, were “now in the northern part of the Aegean Sea [just off the Black Sea], participating in the maneuvers of NATO Rammstein Dust II 21.” Last week, the US canceled the deployment of two warships to the Black Sea at short notice but just days later, the UK sent two warships to the region.

On Monday, the Kremlin declared that large parts of Crimea, including its southern part where the naval base of Russia’s Black Sea Fleet is located, as well as parts of the Black Sea itself, would be “temporarily dangerous for aircraft flights.” Russia has also closed the sea passage between the Azov Sea and the Black Sea for foreign war ships from April 24 through October 31.

The activities by NATO dangerously heighten tensions in a region where the military situation is already on a knife edge. The last few weeks have seen an uptick in fighting between the Ukrainian army and Russian-backed separatists in East Ukraine.

A civil war has raged here since a February 2014 US- and German-backed coup in Kiev ousted the pro-Russian government of Viktor Yanukovich. The war has killed an estimated 14,000 people and displaced millions. This year, over 30 Ukrainian soldiers have already been killed, compared to 50 Ukrainian troops during all of 2020.

On Monday, another Ukrainian soldier was killed just hours before representatives of Ukraine, Russia, Germany and France were scheduled to meet in an attempt to renegotiate a failed ceasefire between the east Ukrainian separatists and the Ukrainian army. The talks reportedly accomplished little.

The immediate backdrop for the recent escalation of military clashes was the Ukrainian government’s adoption of a strategy to launch an offensive in the Donbass and “recover” Crimea. The peninsula in the Black Sea was annexed by Russia in March 2014, following the coup in Kiev and a popular referendum in which Crimea’s residents overwhelmingly voted in support of becoming a Russian territory.

Over the past few weeks, the Ukrainian government of Volodymyr Zelensky has aggressively lobbied the US and EU to accelerate Ukraine’s admission to NATO. However, French President Emmanuel Macron and German Chancellor Angela Merkel have refused to support Ukraine’s NATO admission at this point.

The Ukrainian ambassador to Germany has threatened that the Kiev government is considering the acquisition of nuclear weapons “on its own” should its request to join NATO not be granted. According to Russian press reports, the Ukrainian parliament is now also preparing a letter to the US Congress to request the status of “major non-NATO ally” (MNNA).

On Wednesday, Ukraine’s Foreign Minister Dmitry Kuleba revealed that he had asked US Secretary of State Antony Blinken to provide Ukraine “powerful means of electronic warfare” for its stand-off with Russia. He also said that he had called upon EU Foreign Ministers to cut Russia off the SWIFT system, an international communication system for banks and other financial institutions. Such a step is understood to potentially lead to the complete collapse of the Russian financial system.

The Ukrainian ruling class is also stepping up its domestic preparations for war. This Monday, the Ukrainian Security Service (SBU) announced that it would be carrying out “multi-stage anti-terrorist” drills across the country. In an indication that the government is preparing for martial law, the announcement said that “a special regime may be temporarily introduced in certain areas amid the drills, as well as restrictions or bans on the movement of motor vehicles and pedestrians, ID checks, and inspection of vehicles, etc.” A precedent for this was set by former President Petro Poroshenko in 2018, who declared martial law after staging a provocation in the Azov Sea.

At a meeting last Thursday with the country’s National Security and Defense Council, Ukrainian President Volodymyr Zelensky discussed the government’s military readiness. Urging citizens to “trust the official statements of our General Staff or the President’s Office only,” he stated. “The army is ready—that’s the most important thing.”

The press service of the city of Kiev had previously published a map of updated bomb shelters and revealed that government funds had been used to build civil defense structures to shelter the population in case of war.

Well aware that the continuation, let alone expansion, of the war in East Ukraine, is deeply unpopular, the Ukrainian ruling class is seeking to mobilize the country’s far right. Neo-Nazi forces have already played a central role in the 2014 coup and the subsequent civil war.

Last week Arsen Avakov, Ukraine’s Minister of Foreign Affairs, a man close to the far right and one of the country’s most powerful politicians, appealed to these forces on Facebook. Calling them “patriots” and using fascistic language, he asked them to prepare for war and protect the “Motherland.” Avakov suggested that Ukraine would fare better than it did in 2014 due to the over $2 billion in military aid and equipment it has received from the US since.

As Minister of Internal Affairs, Avakov controls the country’s National Guard, which was created in 2014 and incorporated the neo-fascist Azov and Donbass battalions. In recent years, his ministry has played a central role in protecting and developing the country’s far-right forces. Organizations like the Azov Battalion and C-14 have carried out a number of deadly attacks on journalists and ethnic minorities, with near immunity from prosecution.

Within the Ukrainian press, the notion that the United States and NATO will militarily back Ukraine against Russia continues to be pushed. Much was made of recent comments by acting US Ambassador to Ukraine Kristina Kvien, who suggested that the US may consider deploying more troops to Ukraine in the event of a war with Russia.

While speaking with Ukrainian Prime Minister Denis Shmyhal, Kvien stated, “We are constantly assessing the situation and making an assessment of the needs of the Ukrainian side. And we have a permanent presence of 160 American troops. And if, according to our estimates, the needs change and need to be increased, we will consider the issue.”

There is widespread opposition in the population to an all-out war between Ukraine and Russia, which threatens the lives of tens of millions. Thousands of Ukrainians have deserted the front in the civil war in East Ukraine. Zelensky himself was only elected in 2019 due to mass opposition to the former president’s rabidly anti-Russian policies and war mongering.

Whatever the decision of the United States and European imperialist powers in regards to Ukraine, the only way to stop the imperialist war drive is through the creation of an international, socialist antiwar movement of workers across Eastern Europe and the world opposed to the outdated and barbarous capitalist system.