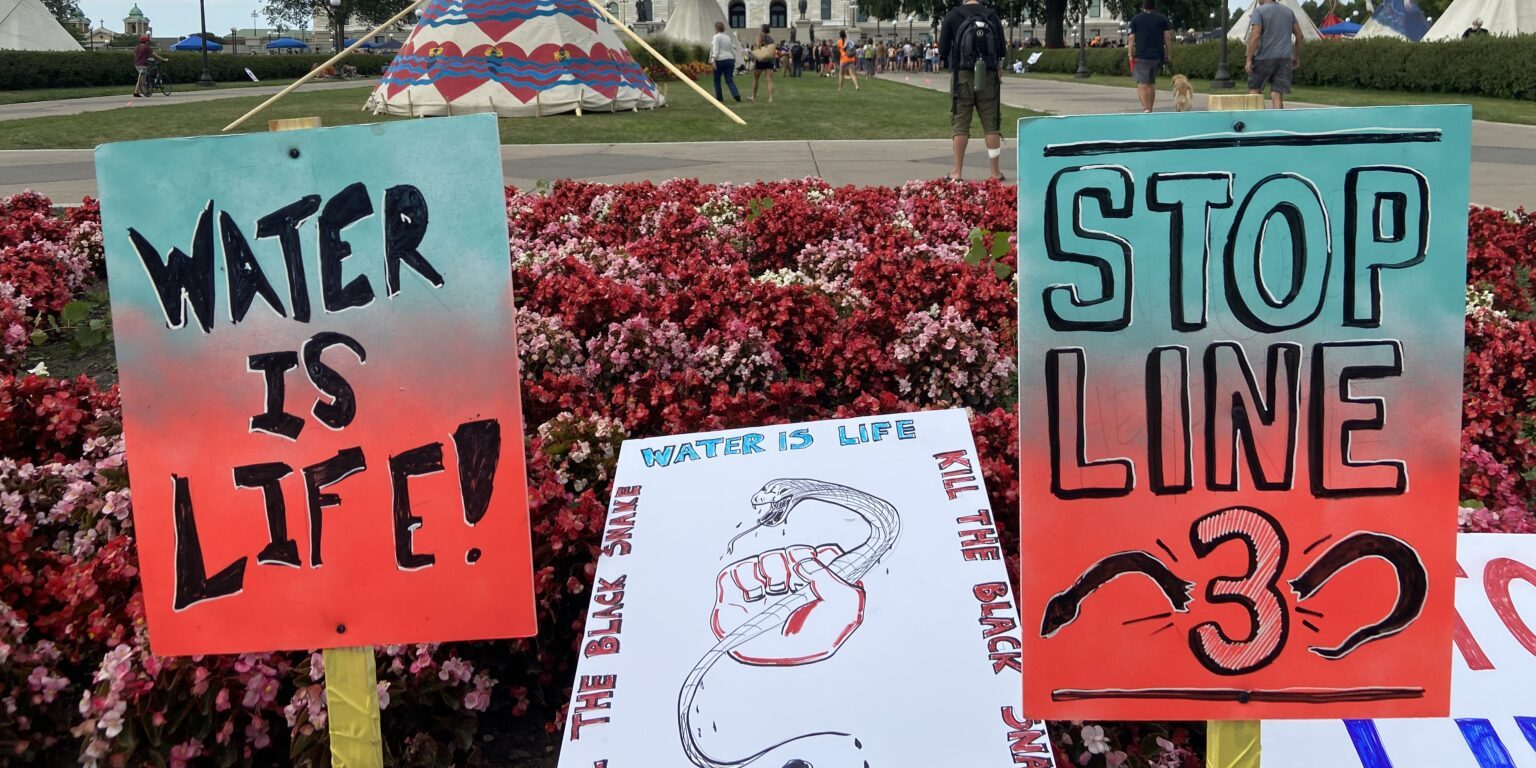 Pressure Is Building On President Biden To Stop Line 3

After walking more than 250 miles over 16 days, from the headwaters of the Mississippi River down to the Twin Cities, water protectors fighting to stop the Line 3 tar sands pipeline were met by more than 2,000 people gathered outside the Minnesota State Capitol. The group came together across race, occupation and generation, in ceremony and solidarity to send a message that the opposition to Line 3 isn’t going anywhere.

This powerful gathering came amid a months-long campaign by Indigenous-led water protectors and allies who have been bravely putting their bodies on the line along the Line 3 route to stop construction of this pipeline, which is currently being built through critical waterways in northern Minnesota in violation of Indigenous treaty rights.

If completed, it would carry more than 760,000 barrels of toxic tar sands oil per day through more than 200 bodies of water, putting our water at risk and bringing more climate-polluting fossil fuels to market at a time when science tells us we must be rapidly leaving them behind.

The water protectors standing against Line 3 have faced a brutal and militarized police response as they peacefully protest construction. They have been shot at with rubber bullets, tear gassed, buzzed by helicopters, surveilled, and harassed. More than 700 people have been arrested or cited for standing up for Minnesota’s clean water.

As we gathered outside the Capitol, it was heartening to know that the movement has extended far beyond Minnesota. Days earlier, hundreds of activists took direct action in Washington, DC in opposition to the pipeline. Our movement was also joined by a group of more than two dozen members of the U.S. House and Senate, who sent a letter urging President Joe Biden to act immediately to suspend the federal water crossing permit for Line 3, issued hastily in the final days of the Trump administration, and order a thorough review of the pipeline’s impacts to Indigenous rights and the climate.

The actions of the last week, from St. Paul to the White House, were a beautiful expression of solidarity. Across the country, communities came together to turn up the volume on the opposition to Line 3 to the point that Biden can no longer ignore us. It was also a declaration of hope that we can still stop this dangerous pipeline, despite Enbridge’s claim that they’ve nearly completed construction.

The company has said they expect to be in service by the end of this year, and we know at this point it will be an uphill battle to stop it. But what has happened in the course of construction over the last few months has proved the necessity of stopping them before they can do any more damage.

The Minnesota Pollution Control Agency now says that Enbridge has had at least 28 spills of drilling fluid during 59 days of construction. That’s a spill about every other day, releasing drilling fluid containing numerous polluting chemicals. If they can’t even get through construction of the pipeline without damaging our waterways, how can we trust Enbridge to run hundreds of thousands of barrels every day of some of the dirtiest, most difficult-to-clean-up oil on the planet through it?

Spills into waterways are a violation of Enbridge’s water crossing permit, and while the pollution control agency says it’s investigating, it hasn’t yet taken action to hold them accountable. We need the Biden administration to step in and do what our state regulators haven’t: Protect Minnesota’s clean water and our climate from this destructive pipeline.

Biden campaigned on an ambitious platform of prioritizing climate action and environmental justice, and when he was elected I felt hopeful for the future of Minnesota and of our country. I felt that same hope watching the crowd of thousands on the capitol lawn, in solidarity with Indigenous leaders who are demanding that we honor the treaties and leave a livable planet for our children and grandchildren.

Our movement is powerful, and we are not going anywhere. We will keep pushing forward — demanding that President Biden live up to his promises and lifting our voices for climate justice.