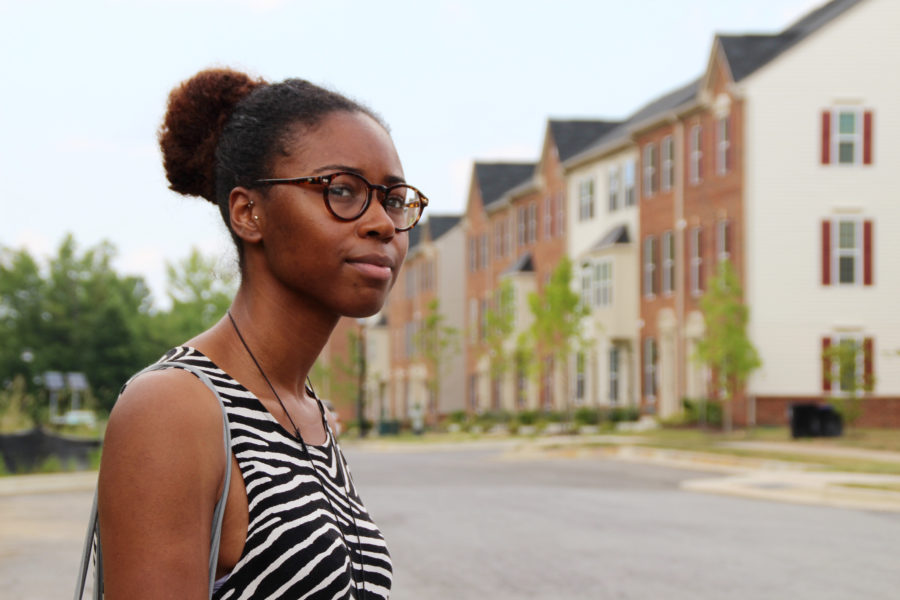 Above Photo: Briana Bostic stands on the street where the potential Amazon Distribution Center will be located in Prince George’s County. Bostic is trying to appeal the construction of the warehouse to the county council in September. Dominique Maria Bonessi / WAMU

When Briana Bostic moved to her developing Prince George’s County neighborhood last year, she was told that a shopping center, grocery store, library, and other amenities were going to be a part of the development.

“It wasn’t just promises,” Bostic said. “It was a large and developed and involved plan with neighborhood input from thousands of people. It was the exact opposite of the process we see now.”

Bostic is referencing a decision at a county council meeting last month to approve zoning changes. Those changes will allow for an industrial warehouse — suspected to be Amazon — to be built in the Westphalia neighborhood of Upper Marlboro where Bostic lives. Residents of the neighborhood at the meeting were outraged and now plan on appealing the decision before the 30-day deadline. The county council is expected to meet in September to review any opposition to the project.

Plans For The Warehouse

Residents fear the warehouse is an Amazon facility. They point to Duke Realty, whose chief client is the online retail giant. Multiple news sources have reported that the warehouse would be an Amazon Logistics Fulfillment Center, which will be located in the same area that was supposed to accommodate office buildings, county officials say.Walton Development and Management owns the Westphalia Town Center, which it acquired in 2012. That’s where the 4 million square foot warehouse would be constructed by Duke Realty on 78 acres of land. In 2017, Walton received $42 million in tax-increment financing from the county council to complete 15,000 homes, three hotels, and a million square feet of retail and office space. Much of the area is still under construction. That was all part of an initial master plan for the neighborhood. In an email to WAMU, Walton says it plans to continue with those plans alongside the construction of the warehouse.

In June, County Councilman Derrick Leon Davis proposed legislation to change a zoning ordinance to allow a “merchandise logistics center” to be located in a “regional urban community.”

“Persons of record are notified of pending applications by Maryland National Capital Park and Planning Commission,” Davis’s staff wrote in an email. “This is where a lot of the front-loaded engagement should happen.”

Bostic and other residents say only certain streets of the community were notified of the zoning changes and the pending warehouse construction. The county council approved of the plan last month even with a petition signed by 230 residents who opposed it.

“You have residents that are just so jaded and so tired of county councilmembers having developers in their pockets.”

Residents Are Fighting Back

Residents have been outspoken about their opposition to the plan. Many residents, like Bostic, bought homes in the neighborhood for $300,000 or more.

“You have residents that are just so jaded and so tired of county councilmembers having developers in their pockets,” Bostic said. “Derrick Davis is being more accountable to these developers than he is being to people who live in his district.”

Residents have started a GoFundMe page to raise money for a lawyer to appeal the decision to the county council and ask for the warehouse to be relocated. So far, the group of residents has raised more than $3,300 and they intend to file an appeal within the next few weeks.

“It should never ever be in a residential neighborhood,” Bostic said. “This shouldn’t be in a neighborhood that is less affluent or less privileged. It belongs in an industrialized or commercial zone.”

Other residents say they’re concerned about increasing traffic from 18-wheeler trucks, air and noise pollution, and their children’s safety.

“Safety is a big concern,” said Destini Harris, a resident and mother of two. “The facility is very close to the residential homes and some of those homes will be about 100 feet from the development. They’ll be close to the influx of additional vehicles coming and going everyday 24/7.”

Residents have taken to Twitter sharing their opposition to the warehouse with the hashtag “#OneWestphalia” They have also asked County Executive Angela Alsobrooks to step in and talk to Walton Developers.

“She is going to work to see what our possible path forward is,” said Gina Ford, a spokesperson for Alsobrooks. “And hold the developer accountable to make sure they deliver on the promises they made to the residents that bought homes in this community,”

Alsobrooks has minimal power over zoning ordinances because changes to them do not have to be approved by her. After more than a decade, Ford says it’s disappointing that the promises of a grocery store, shopping center, and library still haven’t come to fruition.

Davis and other councilmembers say the warehouse will also help spark job growth. But experts at the Economic Policy Institute say that the fulfillment centers do not generate broad-based employment growth. The institute’s study found that the tax-increment financing, tax breaks, and other money provided by local governments to lure Amazon doesn’t level out with increased employment and overall long-term economic growth to the local area.

Walton’s Executive Vice President Ed Fleming says the group intends to bring the promised restaurants, shops, and grocery store to the neighborhood by 2021.