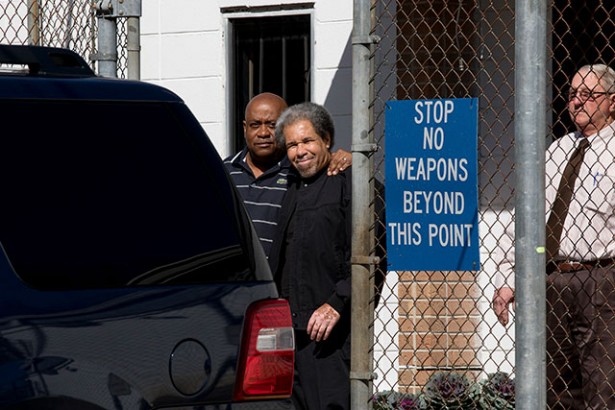 Above Photo: Albert Woodfox, second from left, walks out of the West Feliciana Parish jail in St. Francisville, Louisiana, February 19, 2016. Woodfox, who has spent nearly all of the past four decades in solitary confinement and was facing his third trial for a 1972 murder, was set free as part of a plea deal with prosecutors, his lawyer said. Woodfox has long maintained his innocence in the murder of a prison guard. (Bryan Tarnowski / The New York Times)

In the run-up to the national prison labor strike on September 9, revolutionaries of decades past cast their imposing shadows over a new generation of activists, especially those in organizations like the Free Alabama Movement. At a gathering of the Formerly Incarcerated, Convicted People & Families Movement (FICPFM) held in Oakland to commemorate the 45th anniversary of the Attica rebellion, Truthout had the opportunity to speak with three of the most important historic figures of prison struggles past: Albert Woodfox and Robert King of the famed Angola Three and former Black Panther and Republic of New Afrika activist Sekou Kambui. These men are symbols of resistance and role models of revolutionary determination for the present generation of incarcerated strikers.

Along with codefendant, the late Herman Wallace, Woodfox was convicted of killing a prison guard in Louisiana’s Angola prison in 1972. Woodfox subsequently spent 44 years in solitary confinement, only winning release earlier this year. King spent 29 years in isolation before his conviction for a 1973 prison murder was overturned in 2001 and he was released. Both were members of the Black Panther Party. Being in isolation, the two had little experience of work stoppages, since they were banned from employment. However, hunger strikes were familiar territory to them. “The hunger strike is the voice of protest,” King told Truthout, “the only weapon that a person has got.” He noted that the power of the hunger strike largely rested in the legal requirements for prison authorities to report such incidents and monitor the health of those involved. According to both men, no other action inside the prison forced the prison authorities out into the open. Woodfox agreed with King’s assessment, “The hunger strike is the most effective weapon but it is so brutal… [but] you get into a situation where you got no choice. If you’re gonna be able to get up and look at yourself in the mirror the next day…” Both men had taken part in a number of such actions, including a 45-day hunger strike in the 1970s in protest against food trays being served on the floor.

While the case of the Angola Three drew international attention, in neighboring Alabama the story of Sekou Kambui largely remained off the radar. Yet, perhaps more than any other figure, Kambui could have provided inspiration for the younger activists of the Free Alabama Movement who sparked the 2016 work stoppage. In the 1960s and 70s, Kambui was one of many young Black revolutionaries. A militant who was part of civil rights organizations and later the Black Panther Party and the Republic of New Afrika, in 1975 he was charged with the murder of two white men in Tuscaloosa, Alabama. According to his online biography, no evidence ever placed Kambui at the scene of the crime or linked him to the weapon used in the murder. He was convicted in a jury trial and ultimately ended up spending 47 years in prison. He paroled in 2014.

Throughout his time in prison, Kambui remained unbroken. He gained a widespread reputation as a jailhouse lawyer. As he told Truthout, “Most wardens don’t want me in their institutions.”  His litigation efforts went beyond individual grievances. In the 1970s he related how his legal action forced the Department of Corrections to set up programs like Adult Basic Education and literacy in the prisons. He also successfully litigated for the establishment of prison law libraries.

Over the years Kambui became much more than what people in prison refer to as a “legal beagle.” He developed a special capacity as an educator and organizer. In the 70s he talked about how he helped orchestrate work slowdowns in the plantation-like agricultural fields where he and most of the men worked. Kambui described how these actions drastically reduced production and ultimately succeeded in “destroying the economy that was based on our labor.” In his view, these workplace rebellions led to a serious reduction in agricultural work inside the prisons for several decades.

Away from the workplace, Kambui embodied what Paolo Freire might call thepedagogy of the oppressed. He carried out education programs in dorms, in day rooms, whatever space they could create. “We would just take over three or four beds” in a dorm and have a class, he said. He placed special emphasis on breaking down the barriers within the population.

“I had the ability to communicate with all people,” he told Truthout, “the Nation of Islam, Vice Lords, Bloods, Crips, Five Percenters, Moorish Science followers, Native Americans, Hispanics, white people, Black people.” He spoke of how he convinced people, “We all benefit by working together… that we need to show the administration that we are working together constructively and harmoniously.”

Kambui’s educational programs were wide-ranging. At times he ran mock courtroom workshops, giving individuals a chance to practice testimony if they were going to court. He established an organization called the Social Consciousness Development Group that set up language classes in Spanish and Kiswahili, petitioned to get computers in the prison and invited guest lecturers from local colleges.

He had a special concern to “Provide a safe haven for youngsters who otherwise would get caught up in a lot of foolishness.” In addition to consciousness-raising, the goal was to “Cultivate mature-thinking individuals.”

“We gave them morality courses,” he told Truthout, “learning how to love themselves” so they would be able to “return to society and act like mature-thinking adults.”

With a change in mindset he also promoted a change in language, encouraging individuals to abandon the use of terms like” inmate” and “offender.”  He told his students, “I am simply an incarcerated person fighting to be free.”

Today, more than two years after being released from prison, Kambui still remains an educator and organizer. Now he is a “formerly incarcerated person” still fighting to be free.