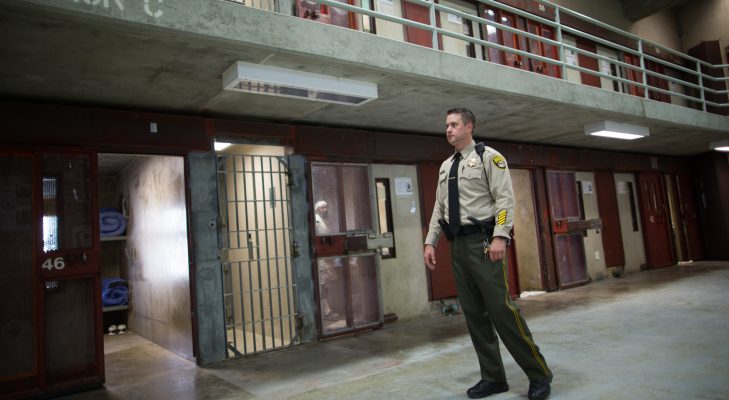 Above photo: Officer Vickjord walks the floor of the 4B SHU at Corcoran State Prison. The prison started accepting inmates in 1988. Grant Slater/KPCC.

Corcoran, CA – CDCr’s negligent and careless response to the COVID-19 outbreak at CSATF has now killed at least three people. Active cases at the prison continue to hover near 1000 and now over half of the facility has contracted the disease. Guards and staff members are still failing to follow safety protocols and continue to move people around the facility creating more and more exposure.

The hunger strikers in D have decided to suspend their starvation in order to recover their health for an ongoing fight. They are still continuing a work strike, refusing recelling, and have adopted a posture of non-cooperation with CDCr. Despite none of the demands being met outright, the strike has helped to galvanize organizing around these outbreaks, and provided a weapon with which to put greater pressure on the system.

Circumstance forced the prison to adopt near universal testing, but people are still having to wait days without results and being moved around without explanation or care for COVID safety. Peoples’ access to basic needs and programming has changed a lot throughout the month, but not substantially improved. Packages have started and then stopped, access to clean laundry has been sporadic, cleaning supplies have been still rare. Showers, phone calls, and yard time continue to be at a minimum forcing people to choose one for just minutes every few days.

The third demand, the demand for transparency, has not been met at all. CDCr’s response has been the opposite of transparent. Video visits were promised mid month in a bid for good press, but these have yet to be implemented. Beyond that the systems approach to the outbreak has been to hide, obscure and deny.

All Power to those who deserve it. All those who fight for it and all those who KNOW. The strike is still alive. Though the leaders have suspended the Starvation Act of the strike, our Workers strike remains alive. WE determine that OUR Covid Intervention Statement remains relevant as an organizing tool to those involved in the struggle to force transparency of California prisons. This Statement is what empowers the future Acts of California Prisoner organizers, working to develop Covid Intervention Actions. It’s sad that it takes individuals to put their life at stake before the public can have knowledge made known of the conditions we suffer. But it is how it goes within the belly of the beast. Leaders plan to resume the Hunger strike at a later date in 2021, and will notice the public at the point of strike. By no means do we want our suspension to be construed as a resolution of our DEMANDS being met. For there can be no talk of SATF Administration meeting strikers’ DEMANDS when SATF and CDCR, Connie Gipson fail silent to answer to the statement of prisoners at SATF Hunger Striking. They do not deserve this sort of credit.

The Hunger strikers recognize the support that the public gave, and we say that though SATF and Cdcr fail silent to Answer the DEMANDS of Strikers, members of the public did not fall silent. Members of the public stood in Solidarity with the strikers, accepting the terms of which we testified to be true, spreading this as high as the state capital. WE rest in recovery from the lost of body weight, consequent to starvation. But we know that there are members of the public who are now directly connected to the struggle here at SATF in the valley of death’s shadow.

We must get some much needed rest. Never have I went so long in starvation. We are satisfied that at least you comrades got the word out. The statement was released and knowledge is made known that prisoners are dissatisfied. The state of California blinked, the Public communities came to hear our complaint, and the Prisoner population has began to Act.

We will take substance and repair our health for the next phase. Though starvation has been suspended, We remain on Work strike. And this involves non-cooperating with cdcr 1.WE aren’t accepting cell-mates other than those we have, 2. WE will not act to interfere with harm, or prevent the act of harm being done to any officer or staff member of SATF/CDCR, 3. WE will Function in our divine principality, come it what thy wilt.