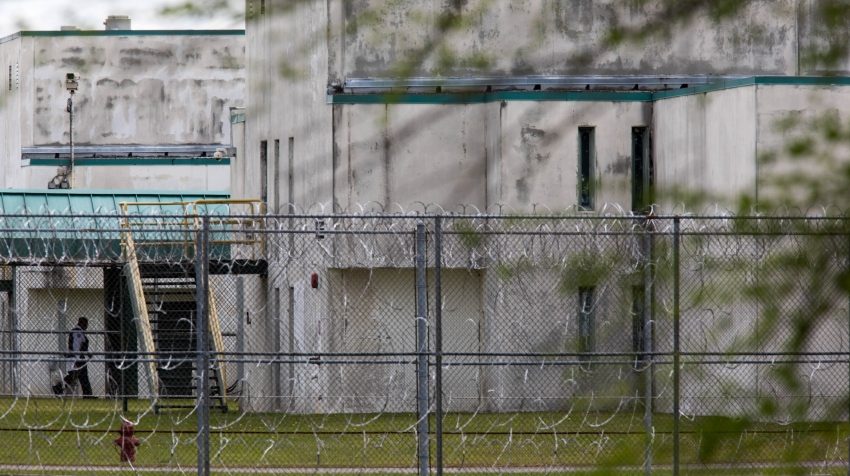 Above photo: A guard walks between buildings at the Lee Correctional Institution, in Bishopville, South Carolina, on April 16, 2018. The prison was on lockdown after an overnight riot killed seven while also injuring seventeen others. (LOGAN CYRUS/AFP/Getty Images)

NOTE: We attended the first performance of “Caged” this week at the Passage Theatre in Trenton, NJ. Caged, which tells the story of one family’s struggle against the generational cycle of mass incarceration,  was written by the New Jersey Prison Collective. It plays until May 20. Click here for more information.

Prisoners across the country say they are gearing up for an end-of-summer nationwide strike against inhumane living conditions and unpaid labor—or, in their words, “modern-day slavery.”

The strike was announced in an April 24 press release and shared by a number of advocacy groups. According to one of the outside organizers who was contacted by In These Times, the press released was developed and written by prisoners. The strike, which is primarily being organized by the prisoners, will start on August 21 and last until September 9.

The action will involve work stoppages, sit-ins and a boycott of purchases from prison stores. The prisoners are demanding improved living conditions and an end to unpaid labor, as well as progressive sentencing reform and access to rehabilitation programs.

Organizers say they derived their boycott tactics from the Redistribute the Pain campaign, a plan put forward by the prisoners’ rights group Free Alabama Movement earlier this year. That campaign declares that “our goal is to remove the assets and monetary gain from those who practice slavery, especially those in the U.S. and their allies.”

“It is time that we take a new look and what is taking place across our nation in our prisons,” reads the April 24 statement from prisoners. “Not only is it important for us to take a look, but we must also take in consideration that for years we have neglected what is actually taking place.”

The strike comes in response to a riot that broke out at Lee Correctional Institution in Lee County, South Carolina on April 15. Seven prisoners were killed and 17 were seriously injured in an incident allegedly sparked by a gang rivalry within the prison. It is the deadliest U.S. prison riot in 25 years. Prison authorities say they didn’t send guards to intervene until they had assembled enough officers to do it safely. This took more than four hours. Prison killings have reached a critical mass in South Carolina, as they’ve quadrupled from 2015 to 2017.

South Carolina activist Malcolm Harris, one of the organizers outside of prisons helping to coordinate the upcoming strike, told In These Times that the violence in South Carolina is “reflective of what’s going on in the rest of the nation.” Nineteen percent of male prisoners in the United States say they’ve been assaulted by other prisoners, and 21 percent of them say they’ve been assaulted by prison guards. Women only make up 7 percent of the total prison population, but 33 percent of prisoners who are sexually victimized by prison staff members are women.

South Carolina corrections department director Bryan Stirling claims he’s identified the specific cause of the riot: cell phones. “Our preliminary investigation has found that this is gangs fighting over territory,” declared Stirling shortly after the riot. “And if they’re incarcerated, then they’re going to have to have a cellphone to continue their criminal ways from behind bars.”

Many have pushed back on this analysis, pointing out that without cell phones, the grisly details of South Carolina’s riot wouldn’t be known to the public. Critics also mention that South Carolina’s Department of Corrections has been pushing for the Federal Communications Commission (FCC) to allow authorities to use cell phone jammers for years. This effort is taking place nationwide: In 2016, 10 GOP governors wrote a letter to FCC Chairman Thomas Wheeler asking the agency to grant states the “flexibility and authority” to stop communication within prisons. One of the lawmakers who signed the letter is former South Carolina Governor Nikki Haley, current United States Ambassador to the United Nations.

Critics of mass incarceration attribute incidents like the South Carolina riot to the overall conditions of our punitive justice system, like the eradication of incentive programs for prisoners. “They’ve steadily cut back what little programs they had, and they’re just warehousing people in understaffed, overcrowded prisons,” Paul Wright, the director of the Human Rights Defense Center, a nonprofit that advocates on behalf of people in detention, told CBS. According to Wright, “Prison and penal operations have been studied pretty extensively for the last 15 years. When you take away all hope and you take away any reason for [prisoners] to behave themselves, then that’s when you start having higher levels of violence, assaults, and attacks.”

Harris echoed Wright’s sentiments. “All these things we’re fighting against with the strike, they’ve exacerbated everything in the prisons and they’ve bred violent reactions,” he said. He also pushed back on the narrative that more guards would necessarily mean less violence. “There’s always going to be more prisoners than guards,” he said. “More guards are not going to stop the problem.”

Isaac Bailey, whose brother is imprisoned at Lee, wrote an editorial for the The Charlotte Observer on April 18th summarizing what he had heard about the riot from his brother. According to Bailey, the actions of prison authorities helped facilitate the gang violence. “Prisoners knew officers would not come to the rescue if they were attacked—which provided a major incentive to join gangs as a means of self-preservation,” wrote Bailey. “After every incident, prisoners are locked down longer, which leads to more resentment and unrest and more violence, a vicious cycle.”

It’s unclear how many prisons throughout the country will end up participating in the action, but the organizers are calling on individuals to “spread the strike and word of the strike in every place of detention.”