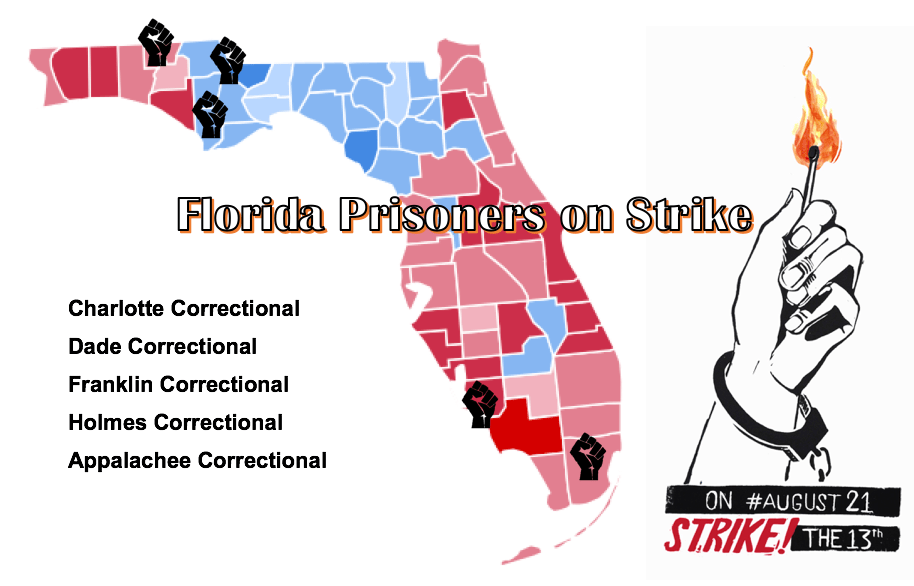 Prisoners Participating In Elections Through The National Prison Strike

In hotbed areas like Florida where elections are coming quickly there are as many as 5 prisons participating in the National Prison Strike. There are several demands listed in the strikes official call that require political action and policies to be made on behalf of prisoners’ rights. Prisoners are calling for the public to make these demand to materialize into legislation on their behalf. However demand number 10 calls for something that many may consider radical and revolutionary, the ability for prisoners to vote. Prisoners having the right to vote gives them the access to the political realm needed in order to make the necessary changes that their lives depend on.

Solidarity with the national prison strike requires that supporters stand behind all of prisoners demands especially number 10 which gives the right to vote back to incarcerated and formerly incarcerated citizens in the United States as they should have a leading role in the political framework of our country. I have expressed how influential prisoners are to our country’s economic system. Their often backbreaking and dangerous work as a free labor source allows many of our country’s convenience to be in place. For example the mass production of license plate, clean freeways and furniture in our universities classrooms are all provided by the minuscule salaried labor of desperate prisoners. All of these things are provided at a low if not no cost to us on the outside. Prisoners have realized that they are tired of being silent participants in our thriving economic and broken political system. While free citizens vote on the most influential policies of incarcerated citizens lives, they do so with little to no input from prisoners. Prisoners need to have a primary seat at the table in criminal justice reform conversations for policies such as the reinstatement of good time, the rescinding of Truth in sentencing laws, the rescinding of the prisoner litigation reform act, the rescinding of Antiterrorism and Effective Death Penalty Act; all of which have left many prisons unjustly suffering behind bars for decades. Prisoners demand to be a part of the conversation and they are taking back their voice through their participation in the National prison strike.

Prisoners everywhere are striking in the form of work stoppages. This is when they refuse to go into their work assignments. Prisons are also participating in sit-in demonstrations where they gather as a group and sit peacefully in a common area of the prison. Prisoners have also been participating widely in boycotts where they refuse to purchase any items in the prison that contribute towards the industrial complex: these include commissary items like food, hygiene products, clothing, hygiene items, cosmetics and many other necessities that prisoners are required to purchase through the prisons selected for-profit vendors like: securepak. These selected vendors exploit prisoners and their low wages by exorbitantly pricing the products they provide for incarcerated individuals. This is mainly due to the fact that they are able to monopolize the prisons product providing industry.

Taking ahold of the Political Sphere by Striking during Elections

Prisoners are speaking out against these and many other types of exploitative and inhumane conditions by participating in their local political election in a very unique way through the disturbance of normal prison operations in the forms of that they have selected.  By disturbing prison operations prisoners can be sure that staff are uncomfortable which is mild in comparison to prisoners who live in a constant state of fear and discomfort due to the understaffing and overcrowding of prisons, the lack of access to the resources needed including medical, mental health, and in their living and working conditions but they’re forced to operate under. Prisoners are and have been for many years tired of being deliberately ignored by the people who are responsible for their safety and protection. They are actively acting out against the system that they are trapped in during this critical period. This has resulted in a Nationwide focus on Criminal Justice Reform to shift from taking a backseat to a primary position in the political conversations of every candidate. There isn’t a politician that fails to mention Criminal Justice Reform when they’re speaking to the public.

We must recognize that the work that prisoners are doing is extremely dangerous as they suffer from several forms of retaliation that vary from a loss of basic privileges like access to showering and clean clothes to being forced to live in extremely volatile and desperately inhumane conditions of solitary confinement. In solitary confinement prisoners are denied phone access and their mail is routinely censored, making it nearly impossible for them to receive communications from the outside. Prisoners are risking this type of threat to their already miserable living conditions because they know that this is the only way that things could possibly change. Even if a prisoner risks spending the next year of their life in solitary confinement as a result of his organizing or participation in the National prison strike they feel that their role is critical. Like the political icon that the spirit of the strike follows, George Jackson spent 7 of his prison years in solitary confinement knowing that his work in organizing prisoners was much greater than the eluded comforts of prison life.

Honestly when you strip away everything, even the simple prison ‘privileges’ that prisoners are rewarded for good behavior, there is nothing nice about being incarcerated. The rewards of being able to have an extra hour talk on the phone or to spend an extra 15 minutes in the yard, or to be able to take a shower while everyone else is forced to be on lockdown; these aren’t privileges these are basic rights. Prisoners should not be threatened or manipulated by staff and officials to receive basic rights like access to shower, clean clothes, edible food or having communications with family. Having the ability to shower, eat edible food, access to clean clothes and toilet paper are not privileges that can be taken away as a consequence to someone’s actions, especially when those actions that are calling for better living conditions. Prisoners know that through their participation in the strike, any form of retaliation will highlight their demands as evidence behind their call. Prisoners are doing an incredible act in organizing these forms of demonstration during this time with elections right around the corner. Through their bravery and strength they are making sure the Criminal Justice Reform and prisoners rights on the top of everyone’s list of priorities because if there is any group that is willing to sacrifice their lives to simply be heard then they deserve to be our priority. Prisoners have galvanized the entire world with their strength and bravery and we should stand behind them as well as push every political official asking of our vote to stand behind prisoners and protect their rights.