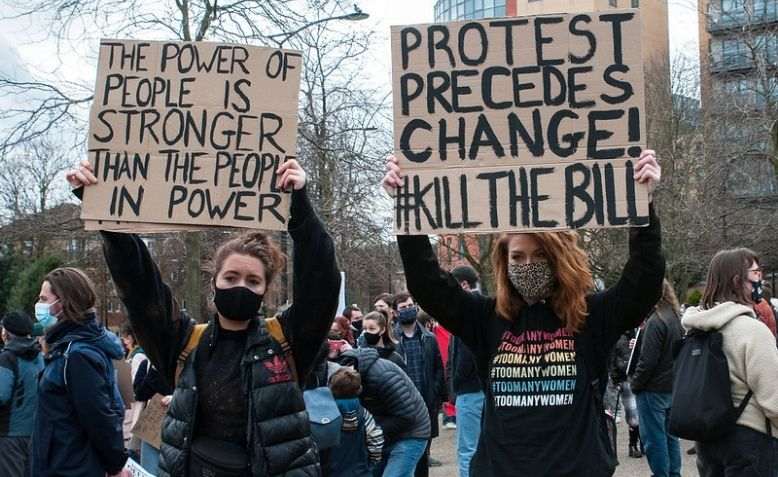 The Defeats Suffered By The Tories In The House Of Lords Is A Victory For The Movement But The Bill Isn’t Dead Yet.

On Monday night the House of Lords inflicted a series of bruising defeats on the government’s Police, Crime, Sentencing and Courts Bill, irreversibly sinking some of its worst aspects. In defiance of the anti-protest nature of the bill, demonstrators outside made so much noise it resonated inside the chamber while the Lords voted against the government on 14 separate counts.

But this is not the end of the road. Kill the Bill protesters celebrating this victory must keep piling on the pressure – this attack on civil liberties and our fundamental democratic rights needs to be defeated in its entirety.

The bill, described by Amnesty International as an “enormous and unprecedented extension of policing powers” and seen by others as an attack on democracy reminiscent of “Cold War era Eastern European dictatorships” enables the authorities to effectively ban peaceful protest and criminalize freedom of speech and assembly. Following Monday’s parliamentary setback the bill may now “ping-pong” between the Lords and Commons until agreement can be reached.

The so called “protest clauses”, added by stealth at the eleventh hour by the Home Secretary, include powers that allow police to conduct suspicion-less stop and search and introduce protest ASBOs, aka Serious Disruption Prevention Orders (SDPOs), which ban named individuals from attending or promoting protests. SDPOs can be implemented when no crime has been been committed – so anyone using their social media account to promote a demonstration could find themselves in breach of the order.

Also included were the new locking-on offences – where protesters attach themselves to objects or each other to make it difficult for the police to remove them – and include as an offence the possessing of items which might be used to lock-on, such as superglue or padlocks, punishable with up to a year in prison.

Voting down the protest clauses is hugely significant as they cannot be reintroduced when the bill returns to the Commons. They were added by Priti Patel in the final stages of the legislative process in a blatant, underhand way to avoid scrutiny. No less than 18 pages were added to the bill and therefore not considered when MPs voted the bill through in July. Patel waited until the bill had left the Commons to introduce its most controversial elements, preventing the media, campaign groups and lawyers from reporting and raising the alarm before the proposals were passed.

But thanks to the Kill the Bill campaign, which held mass protests throughout the country, uniting campaigners and activists, socialists and liberals, the nature of this legislation has not remained hidden. In a pleasing twist of fate, Patel’s underhand move has come back to bite.

So unlike with the rest of the bill, where Lords can merely send amendments back to the Commons to be reconsidered, these late additions will fall. A victory indeed.

But the PCSC bill still holds pride of place as one of the most draconian pieces of legislation to be proposed in recent times. It is a bill that according to lawyers contains some of the vaguest and most imprecise language ever used in legislation.

Even before the additional clauses were slipped in, the bill was accurately described as a “monstrous jumble of laws” intended to criminalize legitimate, peaceful protest and includes measures designed to make the way of life of Gypsy, Roma and Traveller communities illegal. Shockingly, this section remained intact after Labor whipped its members in the Lords to abstain (nine defied the whip). The battle is far from over.

Using divide and rule strategies to promote their authoritarian agenda, Baroness Williams, Home Office minister, described the PCSC bill as an important measure to prevent “disruptive tactics of the middle class trying to stop working people from going to work”. Of course it is nothing of the sort. It is a rightwing authoritarian attack on fundamental, democratic rights. If passed the bill would prevent those with the least power in society being having a voice. If there was ever a bill designed to silence dissent, this is it. We must keep making a noise.