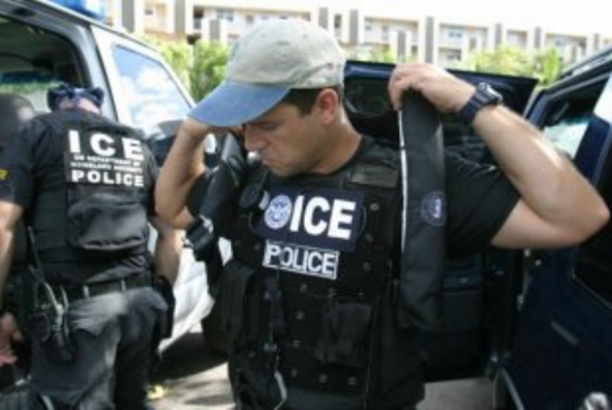 Above Photo: US Immigration and Customs Enforcement

Immigration and Customs Enforcement (ICE) is striking deals with private prison companies to lock up a “guaranteed minimum” of mothers with their children in euphemistically-termed family detention centers.

The 2009 congressional mandate for Immigration and Customs Enforcement (ICE) to keep a minimum of 34,000 people minimum locked up at any given time is already well-established. But a new report by the Center for Constitutional Rights and Detention Watch Network reveals that this federal quota rests, in part, on aggressive deals with companies in the business of locking up families.

“Guaranteed minimums, which appear mostly in ICE contracts with private contractors (though some exist with local governments), guarantee that ICE will pay for a minimum number of people to be detained at any given time,” states the report, whose lead authors are Dawy Rkasnuam and Conchita Garcia of Detention Watch Network. “Because the government seeks to avoid paying for detention space that isn’t being used, guaranteed minimums are essentially local ‘lockup’ quotas that influence ICE’s decision-making about immigration enforcement, whether or not people will be released, where people will be detained, and ultimately, who will profit or benefit from their detention.”

According to the investigation, which based its findings on documents obtained through Freedom of Information Act requests, such local quotas are “even more widespread than previously reported, covering at least 24 detention facility contracts,” accounting for at least 12,821 of the 34,000 beds established by the national quota. Ninety-three percent of those beds are in privately-run detention facilities.

Since 2014, the mass detention of families in these prison-like facilities has been a foundation of the Obama administration’s immigration policies toward refugees from Central America, many of whom are fleeing violence and poverty worsened by U.S. policies. The human rights violations at these camps have been condemned by human rights organizations and the bipartisan U.S. Commission on Civil Rights, and some have compared them to Japanese internment camps.

Karnes, in particular, has been the site of repeated hunger strikes over inhumane conditions, including nearly free labor, lack of legal representation and contaminated drinking water. In 2014, some women detained at the prison alleged that guards sexually assaulted them.

“Almost all guaranteed minimums are found in facilities that contract with private prison companies, and ICE actively collaborates with these companies to keep details of their contracts secret,” said Ghita Schwarz, Senior Staff Attorney at the Center for Constitutional Rights, in a press statement about the new findings. “The public should have a full understanding of how ICE rewards and incentivizes profiteering off the detention of immigrants.”

According to the report’s authors, numerous questions remain. “Due to ICE’s lack of transparency and the resulting unavailability of data, it is currently unclear what percentage of detention facilities are subject to guaranteed minimums, what the costs of guaranteed minimums are, and the degree to which they influence ICE’s practices in controlling the pipeline into and out of detention,” they write.

Yet, one thing is clear: profits are soaring for GEO Group and CCA, the two largest private prison companies in the United States. Both boasted to their shareholders recently that revenues are spiking, thanks in part to the windfall from locking up families.

“At first the Obama administration said they were locking up families to deter people from crossing,” Cristina Parker, organizer with the advocacy group Grassroots Leadership, told AlterNet. “Then when a judge said that was unconstitutional they changed their rationale and said it’s for national security, which is a thin argument. Seeing on paper that they have a quota that directly benefits private prisons underlines that family detention is really driving revenue and profits.”