Privatization And The Pandemic

Unlike other epidemics or pandemics – such as tuberculosis, SARS, MERS or HIV/AIDS – COVID-19 has hit hardest at the world’s wealthiest countries. As of early June 2020, the 37 industrialized countries of the OECD accounted for 59% of all cases and 78% of deaths, even though they constitute less than 18% of the total population affected.

What can explain this phenomenon, the world’s richest countries impacted more than middle-income and poor countries?  One explanation is that COVID-19 spreads faster in countries that are more integrated to the globalized economy, as the OECD members certainly are. A recent study found that globalized countries have indeed experienced more cases per population, but less mortality.

We find this explanation incomplete. First, the extent of a country’s globalization may be masking other factors. And second, some of the most globalized countries have lower COVID-19 prevalence and mortality than countries more integrated into the global economy. For example, Germany has a higher KOF globalization index than the United states, but the latter has more than double the prevalence and mortality rates. Likewise, the UK is more globalized than Spain, but Spain has fared worse in cases per one million people.

Clearly something else is at play. One possible reason for the virus’s differential impact on countries is the relative structure of their health systems. In fact, a 2015 study of tuberculosis (TB) rates in 99 countries found that cuts in public spending on healthcare and the privatization of the health sector were related to higher prevalence of TB. This was set against decades of privatization of health-care systems in developing countries, often encouraged by the World Bank and IMF.

However, the TB sample only included developing countries, while COVID-19 has struck across the entire world. We set out to find whether a similar difference in the financing structure of health care – private vs. public – had something to do with COVID-19 prevalence and mortality rates in countries at all different stages of development. We used data for 147 countries accounting for 93% of the world’s population, and spanning the five continents and all income levels.

We ran several regression models for both COVID-19 prevalence – cases per million people – and mortality – deaths per million, and in each case the extent of private expenditure on health care had a large and positive relationship with the impact of the pandemic (see our full paper here).

The first chart shows that, even when controlling for the level of income, the extent of urbanization, globalization and democracy, a 10% increase in private health expenditure results in a 4.85% increase in COVID-19 cases. 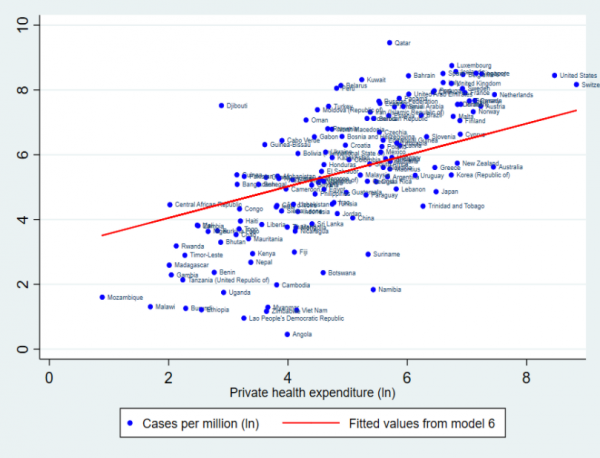 The second chart shows that, controlling for the same variables, a 10% increase in private health expenditure results in a 6.91% increase in COVID-19 deaths. This is an average, and some countries perform worse (e.g. the United States in the top right corner) while some fare a little better (e.g. New Zealand). But the relationship is clear and statistically significant. 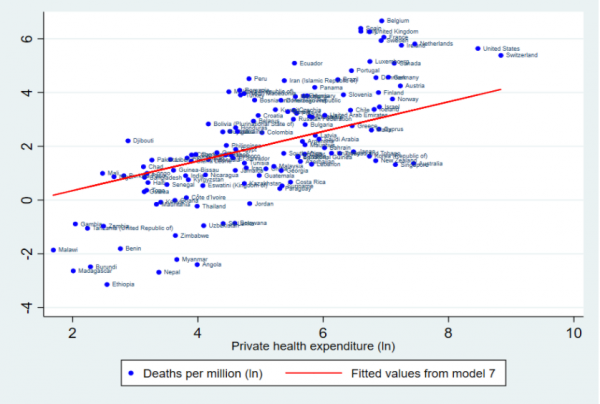 For COVID-19 mortality we also looked at the proportion of people over 65 in the population. Since this is a high-risk group, we were not surprised to find that, on average, 10% increase in the percentage of older people results in a 1.18% increase in COVID-19 deaths.

While policymakers cannot change the demographic structure of the population very quickly, they do have control of policies such as cost-cutting and privatization, which also affect hospital capacity. We found that a 10% increase in the percentage of hospital beds per 1,000 people results in a 1.67% decrease in COVID-19 deaths. Some of the highest mortality rates are in the US, Italy and Spain (which have around 3 hospital beds per 1,000 people), whereas less privatized systems have a much higher ratio of hospital beds per people, e.g. Germany (8.2), South Korea (10.9), and Japan (13.4).

These findings suggest that short-term gains from privatization of health-care systems (such as cost-cutting and in some cases shorter waiting times at clinics) have to be weighed against long-term risks of lower capacity (in both equipment and staffing), less equitable coverage, lower adherence to medical standards and often over-prescription of antibiotics. In the case of COVID-19, the equity element may have played a large role, as uninsured people feeling ill are more likely to avoid costly testing or treatment, as well as less likely to be able to work from home, thus facilitating the spread of the virus.

While the most urgent task is coping with the pandemic at hand, it is not likely to be the last or even worst. Recent research has linked the emergence of zoonotic diseases such as COVID-19 to increased pressure from human economies on nature, leading to declines in wildlife populations and thus a higher risk of animal-to-human transmission of such diseases. With this in mind, policy-makers need to urgently re-evaluate neoliberal policies such as privatization and commercialization of healthcare systems, if these are to become sustainable in the long-run.

Dr. Jacob Assa, The New School for Social Research. He Tweets at @jacob_assa.