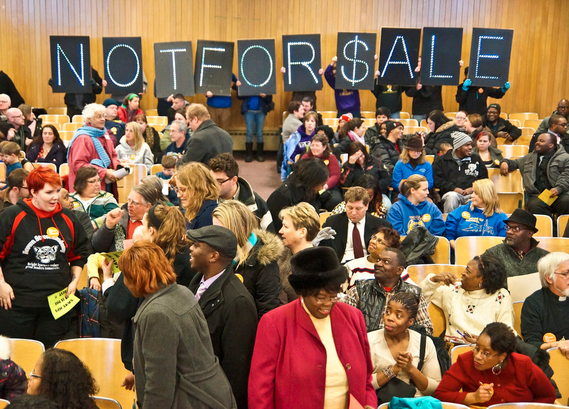 Privatization Of Public Education: This Changes Everything

“The process of taking on the corporate-state power nexus that underpins the extractive economy is leading a great many people to face up to the underlying democratic crisis that has allowed multinationals to be the authors of the laws under which they operate …. What is a democracy if it doesn’t encompass the capacity to decide, collectively, to protect something that no one can live without” (Naomi Klein, p. 361)

I recently read Naomi Klein’s new book This Changes Everything: Capitalism vs The Climate. I was struck by how many similarities there were between the struggle to abate massive climate disaster and the current fight for public education. I think this is a good analogy because like climate change, education “reform” (aka privatization) is everywhere and nowhere. While the issues are clearly related to human and civil rights, there are no lunch counters to sit at, no visible or tangible signs of du-jure segregation. Rather … like the emissions, fracking and melting of ice caps, the erosion of public education is slow, insidious, and difficult to pin point by location or single origin. The problem feels just “too big” to tackle on some days.

I noted many marked parallels in both the nature/cause of the problem (between Klein’s book and education reform), as well as visions for a solution to both. They (ed reform and the capitalist/big oil co’s) are both “extrationist” in nature: We are mining the earth for coal, oil, natural gas, and other resources just as we are mining children’s data for profit, mining our children’s bodies as “human capital,” and mining schools of our tax dollars to line the pockets of corporations. They share an ideology of money, and the money to fund the ideology.

Fast forward to the conclusion: In order to 1) wrest public education from the hands of privatizers/corporate control ….and 2) to create PUBLIC schools that are sustainable, equitable and meaningful for all children (something we have never done before), we must be willing to completely revolutionize the way in which we think about, and act, in the world. Simple. But a tall order.

Naomi Klein says as much; that in order to truly address climate change, we must critically re-examine the entirety of the socio political and economic values embedded within a deregulated, global free- market paradigm. Ecological justice is social justice, just as education justice is tied to ecological and economic and cultural justice.

Think … lead in water in Flint MI and the effects on educational opportunities for those children.

IT’S ALL CONNECTED: The corporate interests that are driving privatization and global control of health services, access to food and water, and management of other public institutions (i.e. prisons) are the SAME corporations, using the same playbook, to dismantle public education.  And this issue is GLOBAL.

The existing structure is, as Klein illustrates (p. 48), hierarchical (top down) whether by government or by corporations (since the ladder owns the former), and highly “individualistic” (think, CBE as the new model for individualized learning at one’s own pace and interests, AKA computer-based learning).  The same ideological interests in big coal and oil support the ALEC agenda to eliminate public education. Think-tanks and corporate sponsored researchers work diligently to influence public education policy with questionable data. Charter “success” = jumbo shrimp. Or think of this analogy: Monsanto is to food production what Pearson is to education “innovation.” Both claim to have a solution to our 21st century problems (food scarcity/21st century learning for all children) when if fact, while they reap profits from privatizing a public good (food production/education) they exacerbate existing human inequalities. Any solution that does not have at it core a focus on equity and rights for the people is no solution at all.

The fossil fuels are like the standardized testing. It’s over. But they hang on, claiming to be necessary when in fact they’re not. We are moving to new horizons. However more dubious are the Big Greens (free- market led “green” advocates that claim to serve  environmental interests and oppose oil/coal, but in fact avoid addressing the real problems while making a nifty profit with green solutions or financial partnerships). They remind me of the new “anti standardized testing” PRO competency-based education “solutions”-Hell, even Bill Gates and Achieve are on board with “less testing.” Like Big Green, they oppose standardized testing but seek to market a “solution” which is not a real solution at all, but rather another nifty way to market-ize and privatize public education. The other groups Big Greens remind me of are the national leaders of the national unions. Unions as a force for support of labor are vital and necessary to fight for public schools. We must support union members and unionized teaching forces. Yet, the leadership, like the Big Greens CEO’s have, “entered partnerships with fossil fuel companies (never mind The Nature Conservancy, with its’ own Texas oil and gas operation” and this eerily reflects AFT and NEA partnerships with efforts funded by Eli Broad and Bill and Melinda Gates Foundations (or Weingarten’s buddy buddy relationship with Hillary Clinton). Big Greens, like national union leadership can bought off and influenced by large donations to look and sound as if they are doing something to help address the problems but in fact do very little to disrupt the power structure driving those very problems. They DIVERT REAL change.

We must have a collective willingness to completely re imagine how we see relationships between labor, modes of production, goods, human services, and human rights. The top-down regimes of both unfettered corporate-run Capitalism and state-run Communism have both failed to provide a sustainable model for both human and planetary rights.  There exist many powerful organizations and leaders who while they claim to want education change, will avoid any efforts which actually disrupt the existing power structure. No plea to legislation, petition, or review panels on testing or equity will do much of anything except expend another decade while the push to privatize rolls forward. We do not have that kind of time. The influence of the fossil fuel lobbies is similar to the influence of the education technology lobbies (i.e. iNACOL) who are shaping education policies in their interests. Decades of global climate agreements, like ESEA since 1965 (NCLB, RtTT, now ESSA) pay lip service to change, equity and quality, while doing the precise opposite behind closed curtains and beyond the eye of public scrutiny. Legislation of ESSA, like any climate-related legislation according to Klein, is directly manipulated by corporate interests (even if it’s so-called “green” corporate interests, or “innovative” education efforts) it’s going to serve the free market ideology before it serves the common good.

There is a third model: But it demands a totally revolutionary dismantling of existing social political and power structures, in which asking “mother may I” of our politicians and education leaders will not suffice. Conducting MORE studies  and providing MORE information to those in power about what WORKS in education (i.e. restorative justice, the arts and small class size) and the negative effects of HST will not suffice (spoiler alert, they already know…they just don’t give a shit). The movement must mobilize from the bottom up, at localized levels, with rhizomatic power structures rather than hierarchical ones, in which compassion and care for others as well as ourselves, all matter. The work is co-operative, collaborative and democratic. It will NOT be led by corporate funded sponsors.

Fellow activist Chris Hedges says as much in his book Wages of Rebellion: The Moral Imperative of Revolt, when he writes, “We live in a system that is incapable of reforming itself. The first step to dismantling the system is to dismantle the ideas that give it legitimacy …” and yet, “the public’s inability to grasp the pathology of our oligarchic corporate elite makes it difficult to organize effective resistance” (2015, p. 61).

Klein suggests, “It’s not just the people we vote into office and then complain about –it’s us. For most of us living in a postindustrial societies, when we see the crackling black-and-white footage of general strikes in the 1930’s, victory gardens in the 1940;s, and Freedom Riders in the 1960’s, we simply cannot imagine being part of any mobilization of that depth and scale” (p. 460).

And yet, nothing LESS than MASS ACTION and mobilization will stop education reform from bulldozing public schools into non-existence. Climate activists chain themselves to trees. We need to start chaining ourselves to public schools slated for closure. Climate activists stand in front of bulldozers. We need to stand on front of computer labs clear cutting libraries and online programs felling classroom teaching jobs like rain forest trees. Climate activists rescue and free wildlife from the ravages of toxic oil spills. We must free our children from the ravages of standardized (toxic) testing.

I’ll conclude with Klein’s own conclusion to the book (with my own insertions in italics):

Because these moments… (of crisis which create opportunities to seize change)… when the impossible seems suddenly possible are excruciatingly rare and precious. This means we must make more of them. The next time one arises, it must be harnessed not only to denounce the world as it is, and build fleeting pockets of liberated space. It must be the catalyst to actually build the world (…and public education) that will keep us all safe. The stakes are simply too high, and the time too short (…and our children and democracy matter too much), to settle for anything less