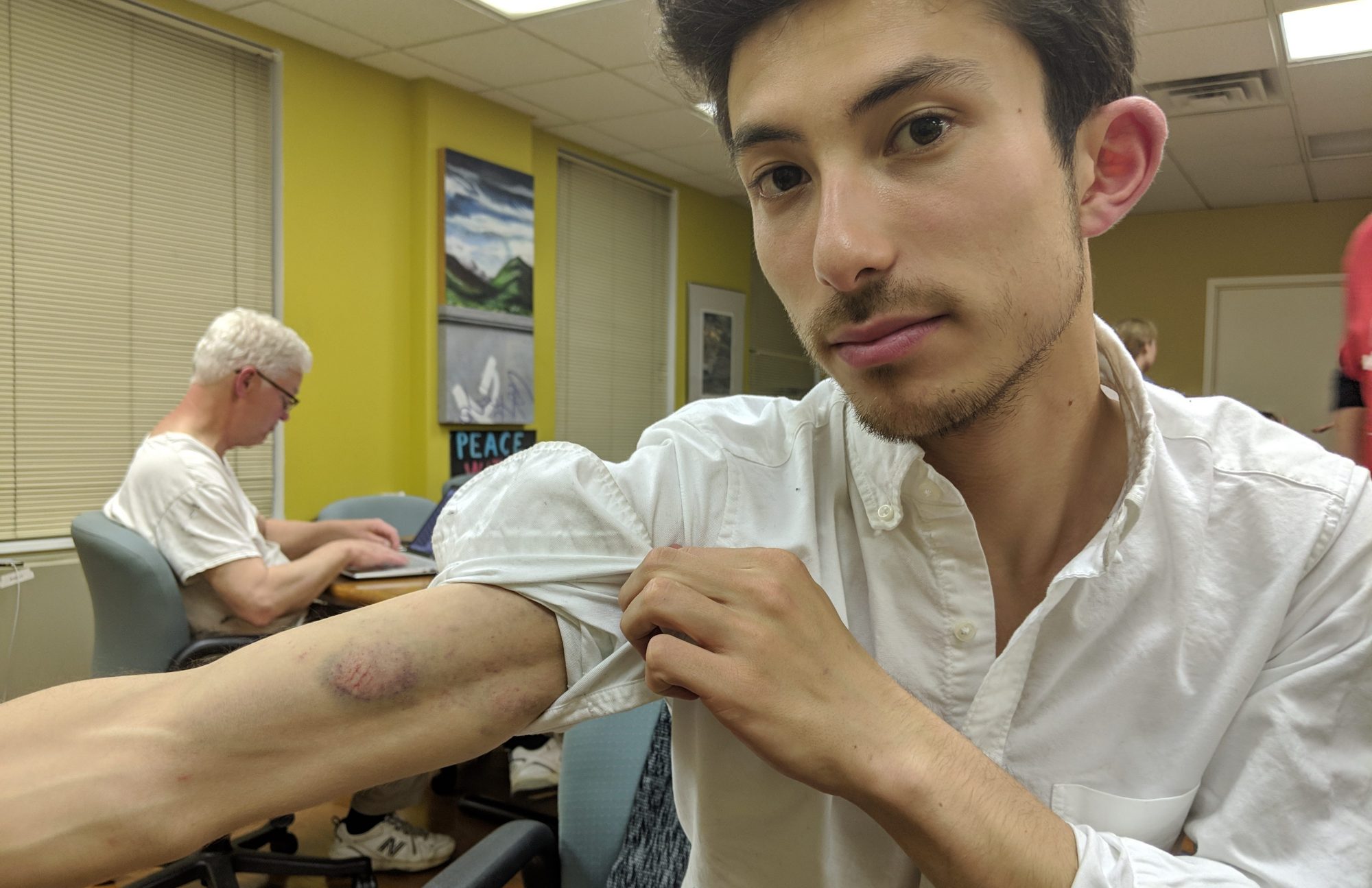 Washington, DC –  On April 10, the day after the Organization of American States (OAS) changed its rules in order to recognize coup-leader Juan Guaido as president of Venezuela, local activists sought and secured permission to live and work in the Venezuelan embassy in Georgetown to prevent its handover to coup supporters. The goal is to hold the space until Venezuela can negotiate a third country to serve as a protecting power.

Until April 30, the activists, calling themselves the Embassy Protection Collective (ColectivosPorLaPaz), worked from the embassy during the day and held public educational and cultural events in the evening. The events covered a variety of U.S. foreign policy issues from intervention in Latin America, to Iran to an inside look at CIA-led regime change efforts. Members and supporters were free to come and go from the embassy.

Since then, embassy protectors have been subjected to widespread abuse, intimidation, threats and assault by Guaido supporters currently camping outside the embassy. Last night, when embassy protectors attempted to deliver food to people inside the embassy, they were pushed, scratched and hit, and one was placed in a choke-hold requiring police intervention to rescue him.

WATCH: Right-wing Venezuelan coup hooligans assault DC residents attempting to deliver food to the embassy protectors besieged inside last night. These fanatics have even sought to obstruct the delivery of medicine to elderly protectors. pic.twitter.com/VoK1NxnHhu

WATCH: Escualidos attack and choke a supporter of the Embassy Protection Collective trying to deliver food. The Secret Service REFUSED to arrest the assailant pic.twitter.com/xVzHd2i4Hk

The situation changed on April 30, when Juan Guaido attempted another coup in Venezuela and quickly failed, being unable to mobilize sufficient civilian or military support. On that day, pro-coup, pro-military intervention Pan-Americans protested at the Venezuelan embassy in Washington, DC. Members of the collective, who have been from the beginning and continue to be peaceful, were subjected to hours of abuse, intimidation and threats from the Guaido supporters. One member was pushed down the outdoor brick stairs that day and suffered lacerations.

That night, pro-coup people started setting tents up outside the embassy. Their encampment has grown steadily, currently surrounding the embassy. They have set up patrols and guards who watch all parts of the embassy day and night. They act to prevent entry of people, food and supplies to the embassy while the police stand by and refuse to intervene.

For the first five days, the campers made constant noise around the embassy from 8 am to 10 pm. This included sirens, bullhorns, air cannons, loud music over speakers, drums, banging pots and pans and whistles. They yelled threats at embassy protectors, including threats of rape and death.

Pro-coup campers have committed numerous acts of assault against embassy protectors without consequence. On May 2, outside embassy protectors gave supplies to inside embassy protectors through a window using a rope. One member, Ariel Gold, was thrown to the ground and suffered scrapes and cuts. She was threatened with arrest while the perpetrator was allowed to go free. Gold has also been sexually assaulted and threatened. On May 3, an older gentleman from the neighborhood attempted to deliver toothbrushes. He was swarmed by campers and pushed violently to the ground, suffering severe lacerations and bruises leaving him bed bound and unable to move his right arm.

On May 4, campers surrounded embassy protectors who attended a solidarity rally, putting megaphones up to their ears and banging pots and pans around their heads.