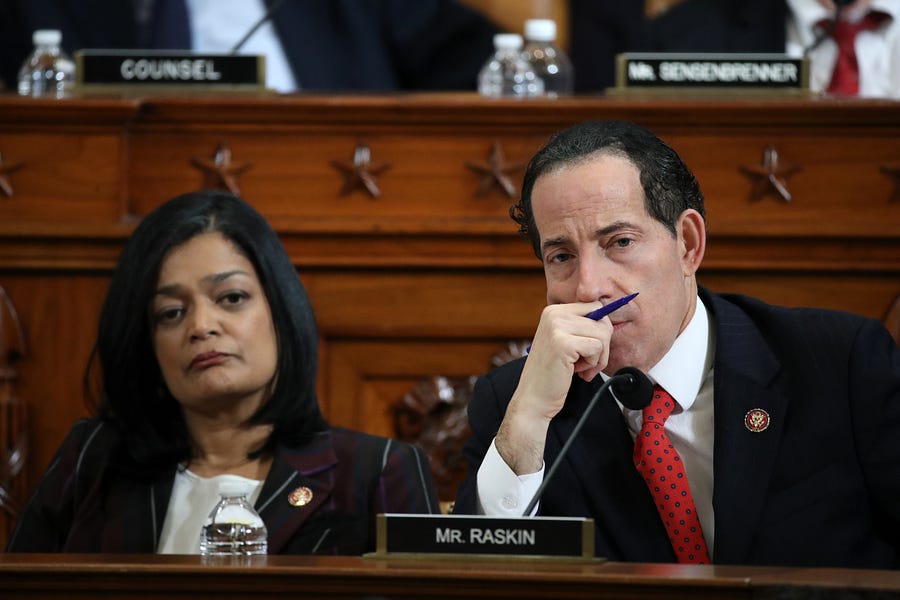 Pro-War Hawks Have Progressives On Their Squad

Retracting Their Call For Diplomacy With Russia To End The Ukraine War, Congressional Progressives Cave To The Neocons.

Reporting on Republican Party divisions over funding the Ukraine proxy war, the Washington Post notes that, despite scattered internal opposition, the GOP remains “home to a large number of old-school hawks who promise to continue providing support for Kyiv.”

In the Democratic Party, there is no need for such a distinction. As the debacle over the Congressional Progressive Caucus’ retracted letter shows, the entire Democratic caucus is now firmly at home with the old-school hawks.

The original letter, released Oct. 24th, gently noted that the integral US military and intelligence role in Ukraine “creates a responsibility for the United States to seriously explore all possible avenues,” to achieve “a peaceful settlement.” Accordingly, it called on President Biden to “make vigorous diplomatic efforts in support of a negotiated settlement and ceasefire,” and “engage in direct talks with Russia” to achieve that goal. The signatories went out of their way to declare their support for Biden’s arming of Ukraine and for continued Congressional funding to sustain it. In arguably its most polite gesture, the letter omitted the fact that Biden’s White House has undermined diplomacy at every turn, from refusing to even discuss Russia’s core pre-invasion proposals to backing – if not orchestrating – UK Prime Minister Boris Johnson’s April jaunt to Kiev that thwarted a tentative peace deal with Moscow.

Were it any other geopolitical issue, a tepid request for diplomacy from less than one-third of the Progressive Caucus would likely go ignored. But in the post-Russiagate era, where MSNBC-watching Democrats have been conditioned to promote confrontation with the Kremlin and dismiss political opponents as “pro-Putin” traitors, there is no room for even the mildest of dissent.

“Vladimir Putin would have signed that letter if asked,” one member of the House Democratic leadership sneered to Politico. The anonymous complainant apparently believes that Putin regards his invasion of Ukraine as “outrageous and illegal”, as the letter put it. But if Putin would indeed sign on to a call for “direct engagement” in order “to reduce harm and support Ukraine in achieving a peaceful settlement,” it is unclear why that would be worthy of this senior lawmaker’s opprobrium. For reflexive supporters of US militarism, the answer is clear: a call for diplomacy with Russia is “appeasement” (Bill Kristol) and “appalling” (Max Boot). Taking these neoconservative naysayers’ side was none other than the former Democratic “Revolution” leader Bernie Sanders, who declared his opposition to the letter as well.

Because any good Democrat must now understand that diplomacy with Russia is an appalling act of appeasement, those who advocated it for 24 hours were forced to repent. Progressive Caucus chair Pramila Jayapal claimed that the letter “unfortunately was released by staff without vetting.” To the certain approval of chickenhawks like Kristol and Boot, Jayapal also declared that while the Ukraine war will indeed end “with diplomacy,” that will now only happen “after Ukrainian victory.” As to how that “victory” will be achieved, the path has been articulated by the progressives’ allied old-school hawk Sen. Lindsey Graham, who has boasted that US military assistance ensures that Ukraine “will fight to the last person.”

It’s not just critics who say that US policy in Ukraine is to fight Russia to the last Ukrainian.

Here’s @LindseyGrahamSC saying that as long as the US arms Ukraine, “they will fight to the last person.” And four months in, he says, “I like the structural path we’re on here.” pic.twitter.com/1fntZG7cjQ

Of all the remorseful signatories, no one renounced the letter more forcefully than Rep. Jamie Raskin. Arming Ukraine, Raskin declared in a statement, is not just about defending a country from foreign invasion, but combating bigotry:

Moscow right now is a hub of corrupt tyranny, censorship, authoritarian repression, police violence, propaganda, government lies and disinformation, and planning for war crimes. It is a world center of antifeminist, antigay, anti-trans hatred, as well as the homeland of replacement theory for export. In supporting Ukraine, we are opposing these fascist views, and supporting the urgent principles of democratic pluralism.

Raskin has apparently forgotten about his own prior positions that take a different view on the state of democratic pluralism in Ukraine. In 2019, Raskin signed on to a letter urging the State Department to declare Ukraine’s Azov Battalion a Foreign Terrorist Organization, on the grounds that Azov is a “a well-known ultranationalist militia organization in Ukraine that openly welcomes neo-Nazis into its ranks.” That militia happens to be formally incorporated into the ranks of the Ukrainian military. And despite a Congressional ban, it also continues to receive US military assistance, as its members do not even bother trying to conceal.

Raskin may also be unaware of the State Department’s annual human rights reports on Ukraine, which most recently documented:

Significant human rights issues included credible reports of: unlawful or arbitrary killings, including extrajudicial killings by the government or its agents; torture and cases of cruel, inhuman, or degrading treatment or punishment of detainees by law enforcement personnel; harsh and life-threatening prison conditions; arbitrary arrest or detention; serious problems with the independence of the judiciary; serious abuses in the Russia-led conflict in the Donbas, including physical abuses or punishment of civilians and members of armed groups held in detention facilities; serious restrictions on free expression and media, including violence or threats of violence against journalists, unjustified arrests or prosecutions of journalists, and censorship; serious restrictions on internet freedom; refoulement of refugees to a country where they would face a threat to their life or freedom; serious acts of government corruption; lack of investigation of and accountability for gender-based violence; crimes, violence, or threats of violence motivated by anti-Semitism; crimes involving violence or threats of violence targeting persons with disabilities, members of ethnic minority groups, and lesbian, gay, bisexual, transgender, queer, or intersex persons; and the existence of the worst forms of child labor.

In these cases, the State Department concluded, the Ukrainian government “generally failed to take adequate steps to prosecute or punish most officials who committed abuses, resulting in a climate of impunity.”

In fairness to Raskin, renouncing a letter calling for diplomacy with Russia is at least consistent with his staunch Cold Warrior militarism over the last several years.

The same cannot be said for Rep. Ilhan Omar. In March, Omar stood apart from the proxy war pack in warning that “flooding Ukraine with billion[s] [of] dollars in weapons” is “unpredictable and likely disastrous.” Eight months and several votes in favor of those billions of dollars in weapons later, Omar now declares that protesters who take the same position as she did in March are “dangerous propagandists who are literally making a mockery of the anti- war movement,” and even spreading “[Russian] ridiculous internet disinformation.”

Alternatively, in mocking activists for echoing her previous concerns about the Ukraine proxy war and accusing them of being Russian pawns, Omar is making a mockery of the Democratic Party’s elected progressives.

The consequences of flooding Ukraine with billion dollars in 🇺🇸 weapons, likely not limited to just military-specific equipment but also including small arms + ammo, are unpredictable & likely disastrous.

Specially when they are given to paramilitary groups w/out accountability.

I am sorry, you all aren’t “anti war protesters”, you are dangerous propagandists who are literally making a mockery of the anti war movement.

I have never had the pleasure of responding to 🇷🇺 ridiculous internet disinformation in person before. Thank you for the opportunity ✌🏽 https://t.co/xzTLQCymgO

One of the few lawmakers who declined to fully abase himself was Ro Khanna, who insisted that calling for diplomacy is simply “common sense.” But in standing by the letter, Khanna diluted its message into a form more palatable to the pro-war crowd.

“All the letter said is that we at the same time that we stand with Ukraine, need to make sure that we’re reducing the risk for nuclear war, that we’re engaging in talks with the Russians to make sure that the conflict doesn’t escalate,” Khanna told CNN. But the letter did not merely seek to “make sure that the conflict doesn’t escalate.” It explicitly called on Biden to try to “end the war” via “a negotiated settlement and ceasefire,” so long as the solution is “acceptable to the people of Ukraine.”

As Khanna’s misleading “defense” of the letter underscores, calling for negotiations to end the Ukraine war is no longer acceptable to the American people’s elected progressives.

There has been ample speculation about the behind-the-scenes pressure that prompted the letter’s quick retraction. But the 24-hour reversal makes perfect sense in light of the Democratic Party’s last six years. Since the 2016 election of Donald Trump, Democrats have embraced fantasies about anything to do with Russia: a Manchurian, Kompromat-compromised president and the hope that Robert Mueller will prove it; Russian bots swinging elections and fueling anti-racism protests; Russia bounties on US troops in Afghanistan; Russian microwave weapons injuring US officials; Russia fabricating Hunter Biden’s laptop. Accordingly, Democrats have also embraced the national security state officials behind these deceptions, and the Cold Warrior outlook that guides them.

“Vladimir Putin … wakes up every morning and goes to bed every night trying to figure out how to destroy American democracy.” -impeachment manager @JasonCrowCO6. It’s a travesty that progressives have been enrolled in this Cold War madness — and that so few have opposed it. pic.twitter.com/JTaYX9ulYV

When it comes to issues that directly led to Russia’s invasion, collusion-crazed Democrats were incentivized to look the other way as Donald Trump tore up vital arms control treaties with Russia and authorized weapons shipments to Kiev that Obama had refused to send, out of fear of provoking the cross-border war that we’re now in today.

In fact, Democrats’ only response to Trump’s militarism toward Russia was to take drastic action ensuring that he continue it. When the Mueller probe collapsed, Democrats rebounded by impeaching Trump for briefly pausing those Obama-opposed weapons shipments while trying to compel Ukrainian assistance on investigating Russiagate’s origins and the Biden family’s role in Ukraine (a linkage that, contrary to the hype, was never actually proven). As Adam Schiff alleged, Trump had somehow undermined US national security by freezing weapons packages that help the US use Ukraine “to fight Russia over there.”

The consequences of enlisting Democrats in a jingoistic campaign to “fight Russia” in Ukraine were obvious, as I wrote three years ago this month in The Nation:

In a different time, a liberal opposition movement might be raising concerns of its own about war-profiteering…; the merits of fueling a war on the borders of the world’s other top nuclear power, or doing so in a way that arms and empowers far-right forces incorporated within the Ukrainian military. Instead, Democrats have been enlisted to champion that proxy war and the coffers of the military firms that profit from it.

With even progressives unable to stand by a meek call for diplomacy for longer than 24 hours, they are also handing a political gift to the Republican Party, which can at least claim to have some dissenting voices within the ranks (a reflection of the GOP voting base, a new poll shows). And as a senior Democratic congressional aide told Vox, the retraction sets a dangerous precedent for this proxy war and beyond:

“We floated the world’s softest trial balloon about diplomacy, got smacked by the blob” — [nickname for the Washington foreign policy establishment] — “and immediately withdrew under pressure. I hate the idea that it’s going to look now like progressives are endorsing the idea that diplomacy is appeasement.”

Congressional progressives are indeed endorsing the idea that diplomacy is appeasement, the inevitable result of their deepening alliance with old-school hawks.