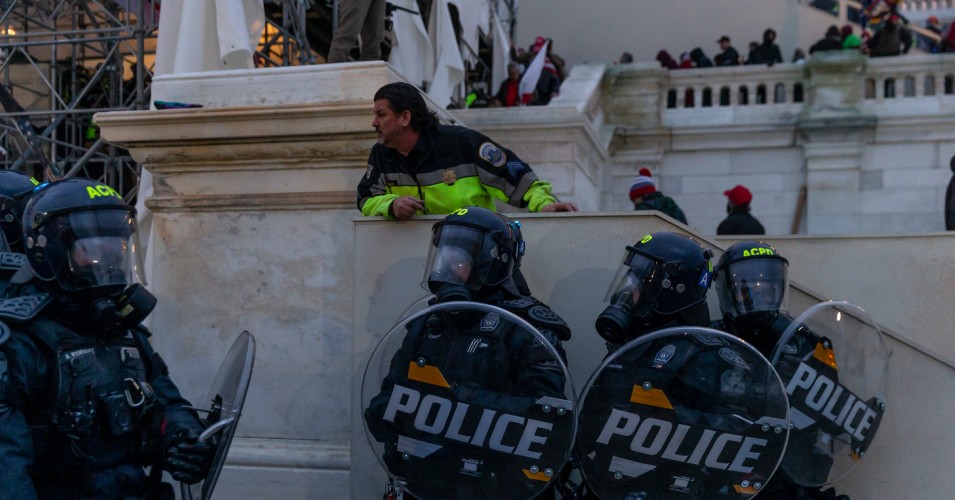 Probe Demanded Over Capitol Police Standing Aside For Pro-Trump Mob

Above photo: Police seen around Capitol building where pro-Trump supporters riot and breached the Capitol on January 6, 2021. Lev Radin/Pacific Press/LightRocket via Getty Images.

“The images of police officers calmly allowing barricades open, letting the crowd enter, and taking selfies inside the building with those who have stormed it cannot go without investigation and penalty.”

Images and videos of U.S. Capitol Police officers taking selfies with members of the pro-Trump mob that invaded the halls of Congress Wednesday fueled growing calls for an investigation into law enforcement’s conduct during the assault, with members of Congress and advocacy groups accusing the cops of actively assisting the coup effort.

The Partnership for Civil Justice Fund, a free speech and civil rights organization, called for a “fully public investigation into the federal and local police planning and response to today’s events, and termination and prosecution of all officers and officials found to have condoned or colluded with the violent mob that attacked the Capitol today.”

“What happened at the nation’s Capitol today could only have occurred because law enforcement allowed it to happen. Far-right mobs smashed windows and doors, stormed the Capitol behind a traitorous, terrorist Confederate flag, and broke into the Senate chamber,” the group said. “The images of police officers calmly allowing barricades open, letting the crowd enter, and taking selfies inside the building with those who have stormed it cannot go without investigation and penalty.”

As mayhem engulfed Washington, D.C. Wednesday, footage circulated showing officers removing barricades that were keeping the crowd of frenzied Trump supporters away from the Capitol Building.

Cops are taking selfies with the terrorists. pic.twitter.com/EjkQ83h1p2

“If the federal police did not want far-right protesters to be inside the Capitol, they would not be inside the Capitol,” Peter Gowan, a member of the steering committee of Metro D.C. Democratic Socialists of America, wrote for Jacobin on Wednesday. “Last summer, the police and National Guard attacked peaceful Black Lives Matter demonstrators who dared get too close to federal buildings. Countless people, including me, were injured.”

“Authorities offered minimal resistance to the mob sent by the president to prevent the counting of electoral votes,” Gowan added. “With few exceptions, the response has simply been to let the far-right mob pass, to wait and see rather than to prevent the violence and seizure of federal property that is occurring.”

When asked why they were not forcibly removing those who stormed the Capitol, one officer said, “We’ve just got to let them do their thing now.” According to the Associated Press, four people died as Trump supporters rampaged through the halls of Congress and vandalized the building.

Rep. Mondaire Jones (D-N.Y.) was among the Democratic lawmakers demanding a probe into the law enforcement response, telling the Washington Post that if those who swarmed the Capitol Building “had been Black, they would have been gunned down before they got inside.”

“My feelings about this are bolstered by the footage of law enforcement agents taking selfies with these domestic terrorists who had breached security, and of security removing metal barricades in order to allow the mob to get closer to the capitol,” said Jones.

We spend billions of dollars on national security and today failed to protect our Nation’s Capital from a lawless mob.

In a statement late Wednesday, the National Lawyers Guild (NLG) noted that “since May of last year, D.C. police have brutally punished protesters for demonstrating against the state, police violence, and white supremacy.”

“This is in sharp contrast to the police response to white supremacist violence in Charlottesville, VA in 2017, where right-wing operatives and loyalists rioted in attempt to reverse a city council decision to remove racist monuments,” the group said. “Today, police stood down yet again—as is expected of such an inherently white supremacist institution.”

“These right-wing operatives are their friends, family, and political brethren,” NLG continued. “The difference between the police response to protesters of color just a few months ago and all throughout American history, and the current response to white Trump supporters instigating a coup, lays bare the priorities of U.S. law enforcement.”