Above photo: A photo supplied by one of Tim Takaro’s supporters shows the 63 year old in his treetop protest apparatus in a Burnaby, B.C., forest near the Brunette River. Jef Bradshaw.

Company did not reply to emails about work near the boundary between Burnaby-New Westminster.

Tim Takaro is by himself but insists he isn’t alone.

Takaro, 63, is protesting the Trans Mountain pipeline expansion project by camping out in a cluster of trees in Burnaby, B.C.

Takaro is a professor of health sciences and environmental health at Simon Fraser University and a former physician, having retired from clinical medicine in December 2019.

He and other environmental activists say trees along the Brunette River near the boundary between Burnaby and New Westminster are slated to be felled between now and Sept. 15 as part of pipeline construction.

He’s hoping to delay that work after setting up an aerial sleeping platform on Monday in the trees high above the ground. 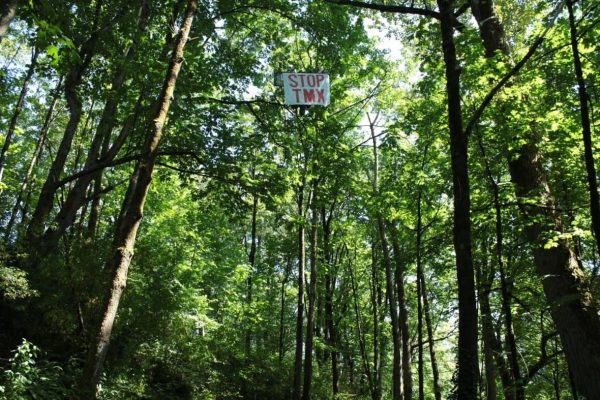 Tim Takaro estimates his arboreal protest camp is suspended about 15 to 20 metres in the air. (Jef Bradshaw)

“I’m stopping this pipeline because the health effects are unappreciated by the [National Energy Board approval] process,” Takaro said.

“It’s my obligation as a public health physician to stop it.”

CBC News emailed Trans Mountain for comment on Takaro’s protest and an update on the company’s work in the area but did not immediately hear back.

Trans Mountain officials have said they expect construction to be underway along every section of the pipeline route by the end of 2020.

The expansion will triple the pipeline’s capacity to carry bitumen from Alberta to Burnaby. It has been contentious due to concern about climate change, opposition from some Indigenous groups —  although many also support it —  and fears of oil spills either on land or at sea.

Takaro questioned how the pipeline could fit in with Canada’s commitment to the Paris Climate Agreement to limit global warming to 1.5C above pre-industrial levels.

Pipeline opponent Will George, a member of the Tsleil-Waututh First Nation in North Vancouver and advocacy group Protect The Inlet, said Trans Mountain crews are only authorized to cut the trees near the Brunette River until Sept. 15 and actions by people like Takaro could add substantial delays to the work.

Takaro has spoken out against Trans Mountain in the past. In 2015 he said he was subjected to a “nerve-wracking” phone call from police after he took photos near a pipeline work site and attended a protest rally.

He isn’t the first person to mount an arboreal protest against the project. Seventy-one-year-old Terry Christenson, who calls himself “the protesting grandpa,” has been arrested more than once for staging high-altitude acts of civil disobedience.

Takaro said he has enough supplies in his tree to last a week “at least” and he isn’t on his own.

“There are thousands and thousands of people supporting me,” Takaro said. “The future has no place for this project. It’s essential that it be stopped.”

A protest against the pipeline is set for Wednesday afternoon at nearby Hume Park in New Westminster.