Above Photo: From Washingtonbabylon.com

Click player below to listen to interviews with faculty members!

For some time now, I have argued that neoliberalism as a system of governance has a talent for co-opting the vocabulary and grammar of Left-leaning projects so to further their own designs for those they govern. This was brought home to me on January 2, 2019 at a picket line held by the faculty of the Community College of Rhode Island (CCRI) expressing their opposition to J-Term, a project forced on the college by the administration that broke norms of shared governance, involved dubious processing of paperwork in relation to the Curriculum Review Committee, and portends an erosion of an educational institute in Rhode Island that has been a major pillar for working class, African American, and Latinx students for decades. 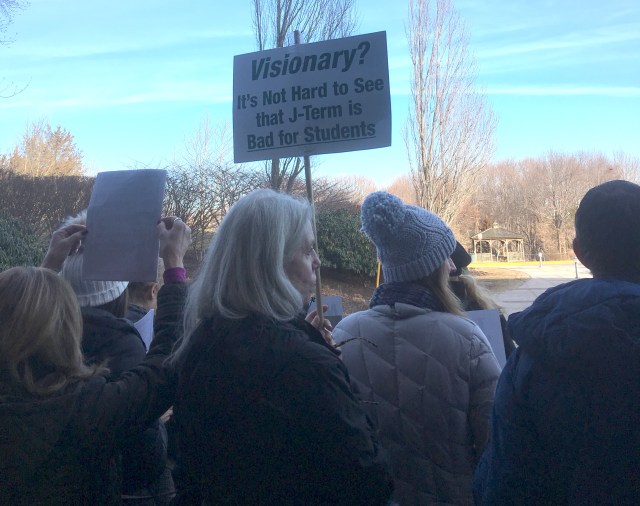 A little precision is required here. In Rhode Island, there are three public colleges that are completely different from one another. CCRI is a multi-campus community college known for job training as well as preliminary Associates Degrees that can serve as a bridge to matriculation into Baccalaureate program. Many graduates from CCRI go on to Rhode Island College (RIC), my own alma mater, or University of Rhode Island (URI), where one of my brothers earned his degree. The degree I earned at RIC was different from the one my brother earned not just because of the obvious difference in major, the difference is manifest in the character of the institution. RIC began as a teacher training school before expanding into a wider number of subjects. Their class sizes are limited to below 35 students and the pedagogy is defined by more traditional liberal arts norms. By contrast, URI is a research institution with much larger class sizes. Over the past semester, I took two classes in the public system for professional development reasons, one at RIC and one at CCRI. The cost difference between RIC and CCRI was pronounced, with the former costing just over $1,100 and the latter costing just over $600. And because of an inter-institutional agreement that extends across the three public colleges, the cost-savvy student can arrange to take credits at two or more institutions that will all be validated on a single transcript at the end of the semester. 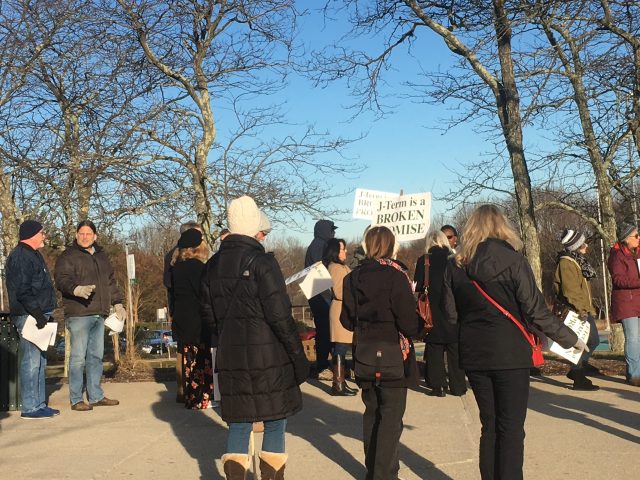 Raimondo’s record when it comes to public education is, putting it politely, abysmal. Her campaign backers are Wall Street donors with a major stake in privatizing public education, such as Paul Tudor Jones. Over the past eight years, first as Treasurer and now as Governor entering her second term, she has promoted various policies, both directly and indirectly, that have furthered this agenda.

The requirements for Rhode Island Promise were advantageous and predatory in that they sought students who would be both most vulnerable to the promise of free tuition while also being unprepared to take the requisite credit load at the requisite level. “Sixty-five percent of our students need developmental courses, they’re not prepared when they get here,” says Steve Murray, president of the faculty union. He describes Rhode Island Promise as “Political grandstanding on [Raimondo’s] part to try to get votes, free college education. Sounds great, I’m not against it, but how they rolled it out is not appropriate. They are forcing these students to take 30 credits an academic year, they have to come full time, and very few of our students are able to do that for academic reasons and for other personal reasons. They’re overwhelming them.” 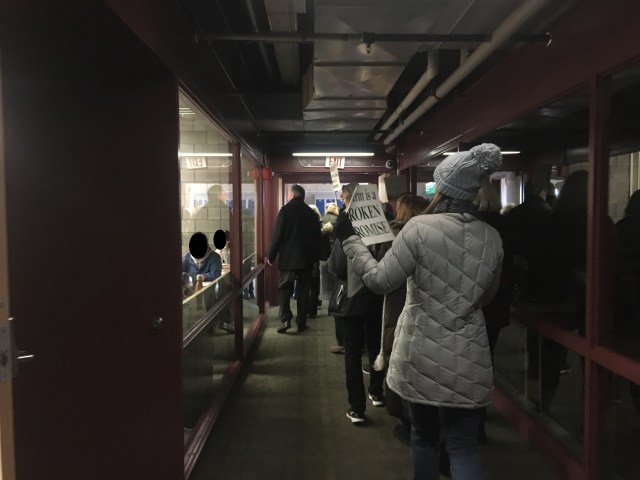 Having worked for several years now with students from Providence public schools, I understand quite well what Raimondo did here and it is deplorable. She toyed with the aspirations of students, many of whom are first-generation scholars and/or English language learners and/or people of color, and lured them into a program that had been designed with benchmarks and standards that were far too high for learners that have to balance significant challenges in their lives with education. Intentionally overwhelming students that may have to work to help their family put food on the table, help raise younger children, or who have serious education gaps caused by a history of interrupted learning caused by family migration or homelessness or other challenges is extraordinarily wrong.

Let’s be frank and clear, Rhode Island is a deeply segregated state and students from the suburbs have parents or guardians who can and do pay for their students to go to CCRI. This was intentionally marketed to the poor in a concerted effort. This is what the program website says: 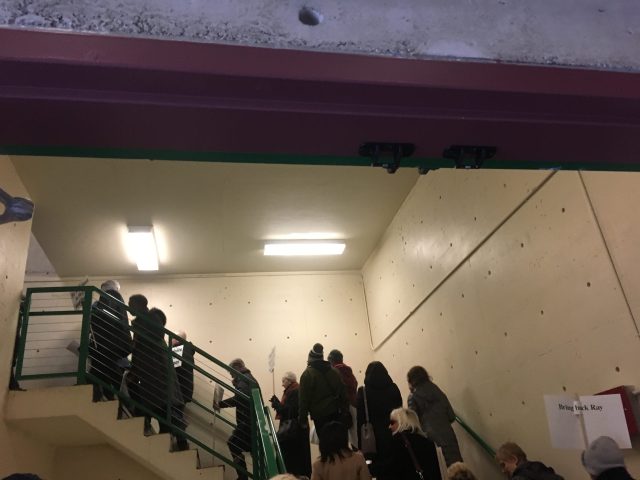 The RI Promise is a “last-dollar scholarship” that fills in the gap between other aid, like Pell grants, and the actual costs of tuition and mandatory fees. Many students work extra hours or look to loan programs to fill this gap. The last-dollar scholarship is designed to help students stay on the path to earning a postsecondary degree without taking on mountains of student debt.

The CCRI page for the program is even more shameless, saying “That’s right: Regardless of your family income, you won’t pay tuition at CCRI.”

“J-Term is not good for our students, it has not gone through the proper channels, the classes, for the Curriculum Review Committee, which reviews all the curriculum to make sure that it’s appropriate for our students, and the timeframe, twelve days, condensing from fifteen weeks, is not enough. It’s not good precedent for the school or our students,” says Prof. Tara Swift.

“I was hired to teach English as a Second Language back in 1990,” says Prof. Margaret Connell. “It’s very difficult for those students, not impossible, but difficult to get through a 15 week semester. So the idea (I’m sorry but I’m going to call it this) of pushing this down their throats in 12 days is simply just wrong. It’s just wrong. It’s almost impossible for those students to get a solid background and foundation in order to move on to the next level and it is asking too much of them. And if they get passing grades, it’s not to say in those cases that those are true grades.”

“Everyone who’s standing here [picketing J-Term], the fifty or so people standing here could have been teaching one of those courses, if they were appropriate, making $4,000. People are turning down money to be out here today and the people in there teaching those courses are prostituting themselves at the cost of our students’s education,” says Murray. (Ironically, I ended up seeing my high school science teacher Louis Ventura teaching a J-Term class when the faculty brought their picket line through the hallways past the classrooms.)

Because of these developments, in December 82% of the faculty voted No Confidence in CCRI Pres. Meghan Hughes, Vice President for Academic Affairs Rosemary Costigan, and Dean Thomas Sabbagh, an unprecedented result.

I suggest that this matter merits notice on a nationwide scale because Raimondo’s policy experiment is being done here in Rhode Island for two possible reasons.

First, it may be a trial run to see how neoliberal policy can adapt to the free college demand put upon the Democratic Party by progressives like Bernie Sanders. Like Obama with the single-payer healthcare movement and his ability to transform the demand for universal coverage into the Affordable Care Act, which his own Solicitor General Donald Verrilli eventually admitted was a tax in his Oral Argument before the Supreme Court, Raimondo may be trying to demonstrate how neoliberal policy can turn a silk purse into a sow’s ear, so to speak.

Alternatively, in creating a project that was going to have such negative results, it may be, like the Hillary Clinton healthcare fiasco of the 1990s, an episode that likewise discredits the movement for universal tuition-free college for a generation. Murray previously told GoLocalProv.com “From what we have in this ‘Enrollment Update’ — 38% of the RI Promise students failed to return for year two—and of those that did return, we haven’t yet been told how many of the returnees failed to complete the first year successfully… I can’t imagine that of the 62% that returned that they all completed 30 credits with a 2.5 GPA. When the College finally chooses to release these numbers, I believe we will see that many RI Promise students did not successfully complete their first year.” 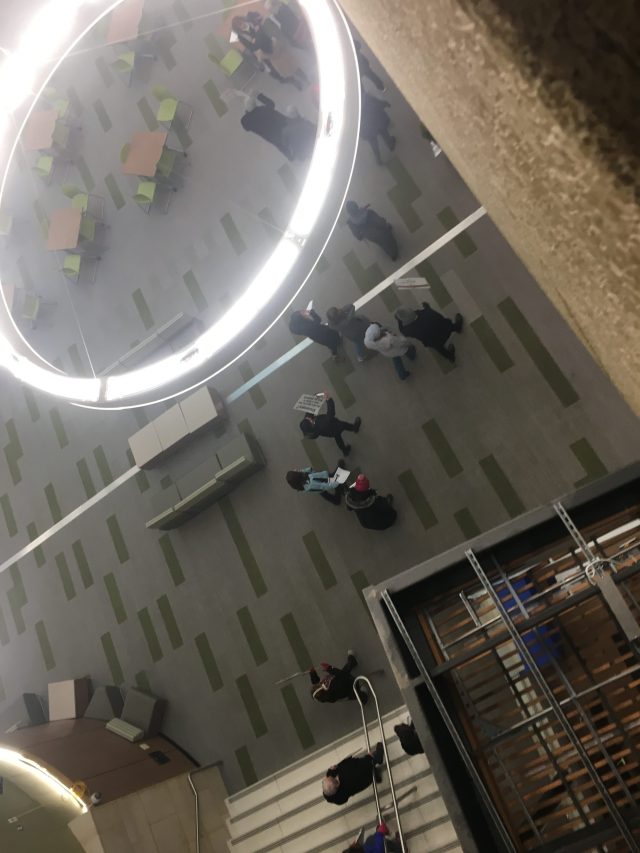 This is a very good bellwether of what is changing in the Democratic Party. It demonstrates the impact that the Sanders campaign and similar progressives are actually having on the wider system they seek to change. Furthermore, consider this: Our longtime Senator was Claiborne Pell, whose name was lent to the Pell Grants that were created in 1972. Gina Raimondo’s husband Andrew Moffit works within the school privatization industry. With an economy primarily based in the service sector, teaching and education are major industries in a landscape that has been hollowed-out by de-industrialization. Rhode Island is therefore capable of being a major incubator for policies to be later rolled out nationwide. It therefore stands to reason that Raimondo’s office was not just shooting into the dark blindly in formulating this policy measure.

Could this be merely a publicity stunt on the part of the Governor? Or is it possible there is a longterm game plan here? Only time will tell. Either way, the public shaming of students who were set up to fail by Rhode Island Promise is pretty disgusting.