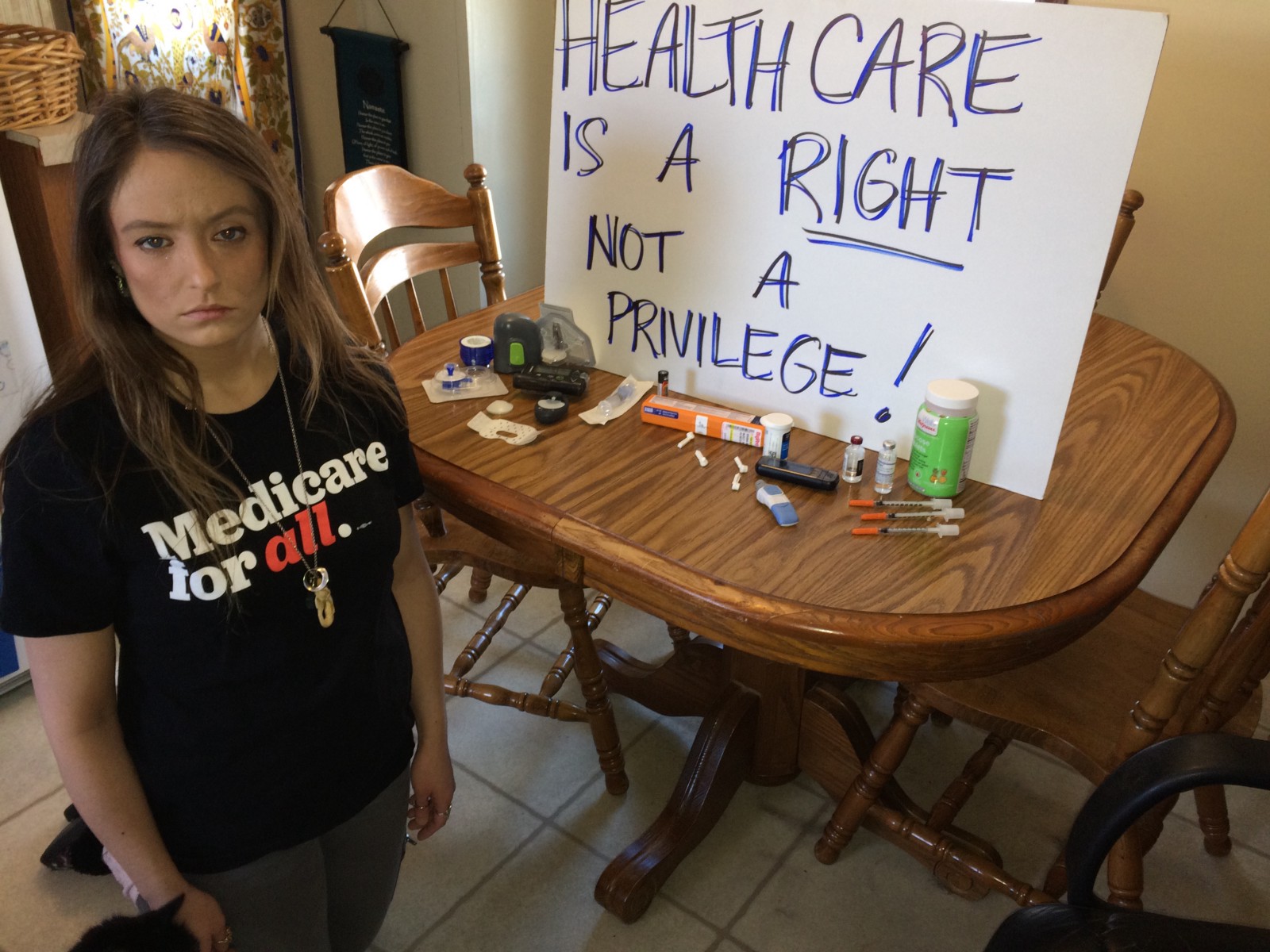 Profit-Driven Health Care Is Killing The Dreams Of Young People. Young People Are Fighting Back.

Above Photo: From Medium.com. Briana Moss, 30, with the supplies she needs to survive type 1 diabetes.

Briana Moss, 30, grew up in Dyersville, Iowa, site of the “field of dreams” (from the 1989 movie). Despite the reputation of her hometown, her own life dreams feel on hold. At age 30, when many young people are getting their careers off the ground, Moss’ life choices are guided by one thing: the need for insulin.

“I know of people with diabetes literally dying because they cannot afford their insulin. It’s very scary and very real,” says Moss, who was diagnosed with type 1 diabetes at age 12. She hadn’t yet finished college when her family insurance ended at 26, and after a few frantic months of insulin rationing, she found coverage through Iowa Medicaid. That’s where she remains, doing secretarial work at a family business, afraid to make any big life changes — which could be deadly.

Emily Hibshman, of Allentown, Pa., 25, has spent her post-college years fighting for change, as an organizer for social justice organizations and a labor union. The path forward, however, seems to have a “stop” sign in it. With her budding career often pinned to campaign cycles, she laments her approaching 26th birthday and subsequent loss of family insurance, explaining, “If I had that social safety net of knowing I had health care, I might be able to continue doing organizing work.”

Moss and Hibshman have more in common than feeling their life choices are limited by a broken, profit-driven health care system. They also share a commitment to standing up and fighting back, as young leaders in the movement to win Medicare for All. Here’s more on why Moss, Hibshman and two other young women are standing up for health care as a human right:

San Francisco, CA barnstorm attendee Claudia Alarcon, RN, 34
“I’m originally from El Salvador. I came to the U.S. as a teen. I’m a neonatal intensive care unit nurse now, in San Francisco. For nurses, there’s a personal connection to [the fight for Medicare for All], but I also have a cousin with a chronic condition who is very limited by her insurance. We think of America as the land of the free — but she isn’t free.

For patients like mine, babies, I just think about how — on top of everything else a parent has to go through — I can’t imagine worrying about how to pay for care. Life comes first. You shouldn’t have to worry about how to pay.

Union nurses know that when we want change, we stand together, and we show our employer that what they are trying to do isn’t safe for patients. With young people, we have to stand together and say, ‘This isn’t right.’ Everyone is scared of change, but not all change is bad. I hope by nurses attending these barnstorms, people will see that the number one trusted profession supports this. You can overcome fear, but if health care doesn’t change — you can never overcome that.”

“When I was younger, my mom was always pounding into my head: ‘You have to get good grades, so you can go to a good college, so you can get a good job, and get good health coverage.’ This really put a fear in me. What if I fail? Am I going to die? Diabetes is a life-changing illness. Stress, hormones, things you can’t control all affect your diabetes.

When I got taken off my mom’s insurance, that was really scary for me. I wasn’t finished with school. How would I afford health insurance? Profiting off sick people is sick. Having health care tied to your occupation really holds everybody back. In what should be the greatest country in the world, there’s no excuse. The money is there, we just don’t have our priorities straight.

Medicare and Medicaid are the most popular health plans in the country. You’re already paying. Why not pay just a tiny bit more, and have it now instead of waiting until you’re 65? And why not do it for everybody?” 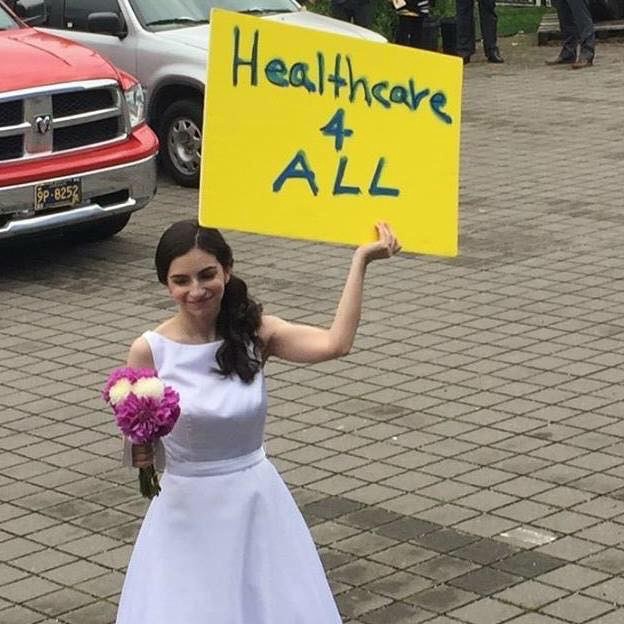 When Robyn Gottlieb, 29, of Portland, Ore., married her fellow Medicare for All champion husband in 2017, they marked their big day with a big message. The couple that fights for Medicare for All together stays together!

“The U.S. healthcare system is terrible. We are so far behind. I have a friend who is struggling — who has a decent job and has to pay so much out of pocket for care, and that doesn’t even cover prescriptions. I have friends whose parents have died [due to lack of coverage]. When the Affordable Care Act (ACA) went into effect, the premiums went up so high for my parents’ insurance, we were basically uninsured, paying out of pocket for everything.

I’ve been in this fight since 2015. I traveled the country with the Bernie Sanders campaign and met so many young people who cared about this issue. My mom has been a nurse for single payer for my whole life. I feel so passionate about this movement and winning Medicare for All. People shouldn’t be going bankrupt and dying. We’re the generation that’s going to get this done.”

Allentown, Pa. barnstorm host Emily Hibshman, 25:
“Young people are vulnerable because we only have a certain amount of time before our healthcare runs out, if we are dependent on family. There’s the whole argument that people get health insurance through their employer, but young people are so precariously employed, we can’t rely on that. So having that social safety net so young people can prosper is so important. We are the future.

The great thing about Medicare for All is that you don’t just have to be progressive to support it, any average person will benefit from this. That’s where the power lies, in building a mass movement of all people. Through recruitment efforts, we can make people understand, they have the power to make this happen. We don’t have to resign ourselves to centrist politicians. We can take back our power!”