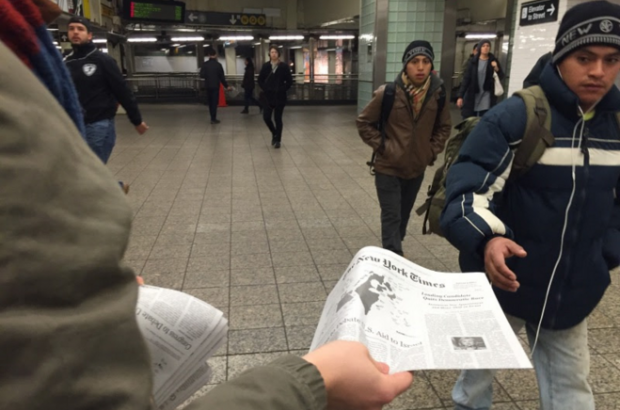 Above Photo: The faux New York Times supplement being distributed in New York.

Yesterday we reported on a parody edition of the New York Times being handed out on the streets of New York City. Since then the fake paper has generated headlines around the world and the Twitter account and website associated with the effort have been suspended. Today, the New York chapter Jewish Voice for Peace and the organization Jews Say No! have claimed credit for the project. Here is a press release the organizations sent out this morning:

(February 3, 2016)– Ten thousand copies of a special supplement of The New York Times focused on Israel and Palestine were distributed across NYC yesterday, while thousands of on-line versions made their way across the internet. The special supplement, which was a parody, includes such articles as “Congress to Debate US Aid to Israel” and “In the Footsteps of Mandela and King: A Non-Violent Movement Gains Ground Ten Years On,” as well as an editorial, “Our New Editorial Policy: Rethinking Israel-Palestine.”

Created by members of Jewish Voice for Peace New York (JVP NY) and Jews Say No!, (JSN), two NYC organizations devoted to justice in Palestine and Israel, the paper was created to “point out how biased current reporting is on Israel and Palestine and to show what a paper that was fair and accurate could look like,” according to JSN member Alan Levine, one of the paper’s writers.

“As a leading source for news in the United States and in the world, The New York Times has a responsibility to its readers to provide fair, balanced, and fact-based coverage. Our paper reflects the news that we wish The Times and other papers would report,” says Candace Graff, one of the organizers of the action from JVP NY. “It includes the context and facts too often missing from The New York Times and other U.S. media outlets.”

The articles highlight Israel’s ongoing policies of military occupation, displacement, and oppression, and “facts on the ground,” such as settlement expansion, the rise in settler violence, discriminatory anti-democratic laws targeting Palestinian citizens of Israel, and the increase of right-wing voices in the Knesset.  “These are all subjects that deserve to be covered and reported on,” Graff added. In a nod towards how U.S. policy on Israel might change if the mainstream media reported fairly on the continuing human rights abuses against Palestinians, the paper includes an editorial that calls on Congress to condition further Israeli military aid on compliance with the Leahy Law, which forbids U.S. military aid to foreign units that have committed human rights abuses.

The two groups will release a brief video about the action tomorrow (2/4) that includes footage of the group distributing the paper on the streets of NYC. Jane Hirschmann, a member of Jews Say No!, and Ben Norton, a writer at Salon who first revealed the creators of the paper, discussed media bias around Israel/Palestine on Democracy Now this morning (2/3). The faux paper’s domain and twitter account were suspended, but can be viewed here and here.

The New York City chapter of Jewish Voice for Peace is part of a national, grassroots organization inspired by Jewish tradition to work for a just and lasting peace according to principles of human rights, equality, and international law for all the people of Israel and Palestine. Jewish Voice for Peace has over 200,000 online supporters, over 60 chapter, a youth wing, a Rabbinic Council, an Artist Council, and Academic Advisory Council, and an Advisory Board made up of leading U.S. intellectuals and artists. Jews Say No!, based in NYC, engages in community education, street theatre, and organizing, and makes their voices heard within the Jewish community and as partners in the broader movement for justice in Palestine/Israel.