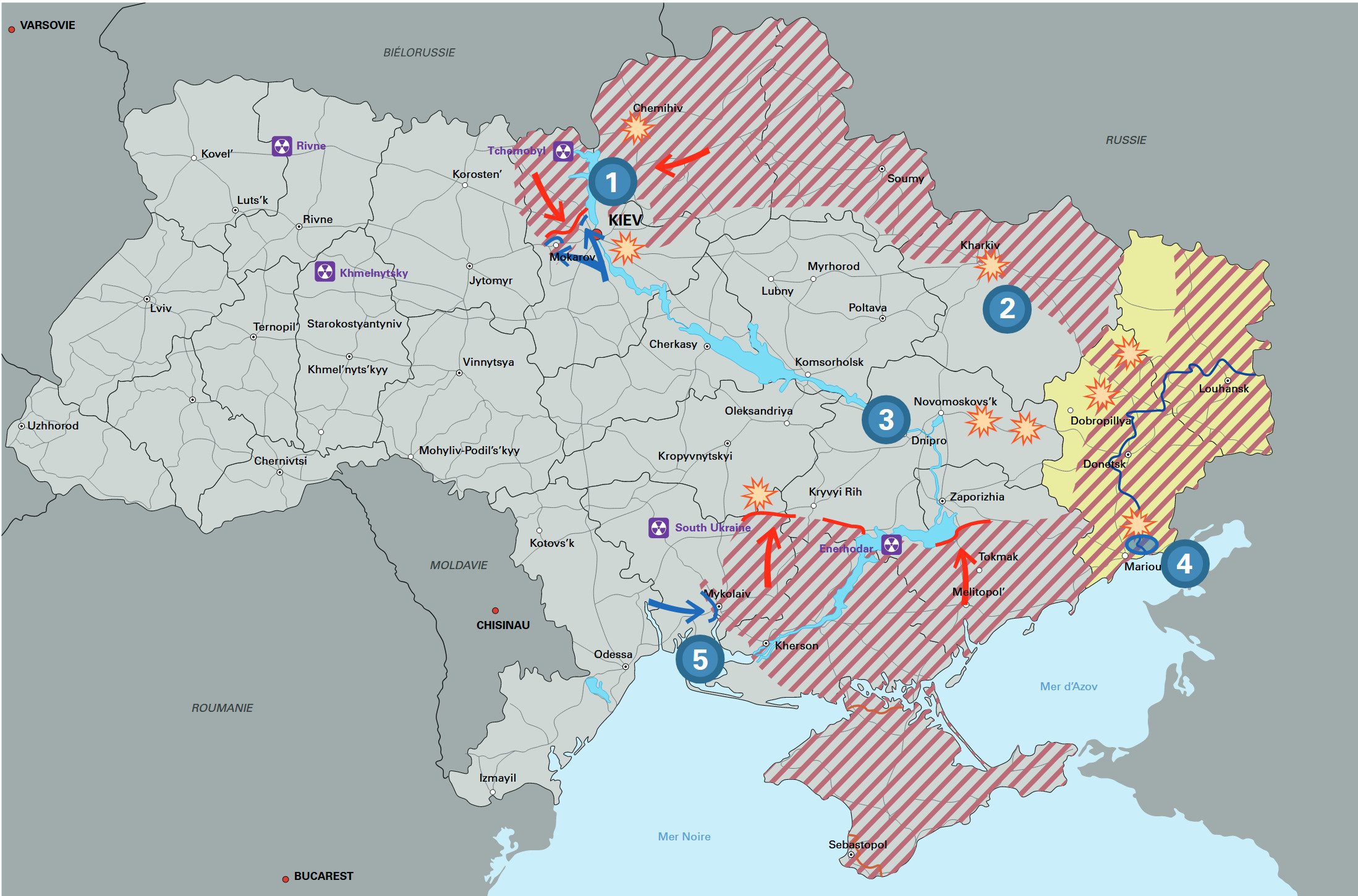 NOTE: Popular Resistance is providing updates on the status of the conflict in Ukraine that you won’t find in the corporate media. It is important to be aware of what is happening to form our resistance to it. The US and NATO countries must cease sending weapons to Ukraine and stoking the conflict, which is bringing devastation and suffering to Ukrainian people.  – MF

This map of the situation in Ukraine on March 24 is provided by the French Ministry of Defense. 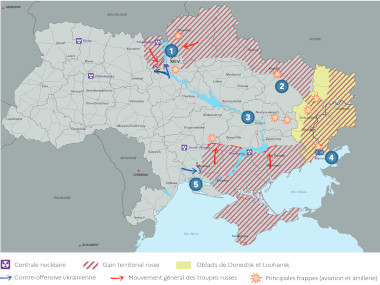 It is likely the most realistic and neutral one available. It comes with short notes about the numbered theaters.

Here are my own takes:

The U.S. has tried to use yesterday’s NATO and G-7 meeting to push the Europeans towards sanctioning Russian hydrocarbon exports. It also tried to attach China to Russia and to get the Europeans to sanction its biggest trading partner. Both attempts failed. There will be no additional sanctions on Russia. And while the NATO communique mentions China it only urges it to leave its neutral position. Everyone knows that that is not going to happen.

The only thing NATO agreed on is the release of a new load of fresh propaganda.

A senior NATO military official said the alliance’s estimate was based on information from Ukrainian authorities, what Russia has released — intentionally or not — and intelligence gathered from open sources. The official spoke on condition of anonymity under ground rules set by NATO.

Andrei Martyanov looks back at the casualties Soviet forces suffered in 1943 when they liberated Donbas from then still first class German Wehrmacht forces. Back then there were more than 1,000,000 Soviet soldiers involved against some 600,000 Germans. Some 1,600 Soviet soldiers were killed each day in fierce fighting. We are now supposed to believe that the much smaller operation against a less fierce and less capable enemy in the Ukraine is killing 550 Russian soldiers per day? That’s obviously nonsense.

As one anonymous Pentagon officer said about the NATO number:

“We continue to have low confidence in those estimates”

For the record Russia’s Defense Ministry just announced that as of today 1,351 Russian servicemen have been killed and 3,825 wounded. (The losses of the Lugansk and Donetsk militia are not included in those numbers.)

There is more propaganda bullshit out there like this from the New York Times:

Sure, the headline gives that impression. But only to those who do not read down into the report:

The asserted gains in territory are hard to quantify, or verify

it was not clear that Ukraine had regained any ground.

But even this muddied picture of Ukrainian progress is helpful for the country’s messaging to its citizens, and to the world — that it is taking the fight to a foe with superior numbers and weaponry, and not just hunkering down to play defense….In Makariv, another battleground town to the west of Kyiv that Ukrainian officials claimed to have recaptured this week, the fighting was also ongoing, Vadym Tokar, the mayor, said in a telephone interview.

“I don’t understand where this nonsense came from,” he said of reports his town had been liberated. “It is not true. We have shelling and we have Russian tanks shooting into the town right now.”

Ukraine has lost at least 74 tanks—destroyed or captured—since Russia widened its war on the country starting the night of Feb. 23.

But Ukraine has captured at least 117 Russian tanks, according to open-source-intelligence analysts who scrutinize photos and videos on social media.

In other words, the Ukrainian army might actually have more tanks now than a month ago—all without building a single brand-new tank or pulling some older vehicle out of storage.

The Dutch “open-source-intelligence analysts” who came up with those stupid numbers are the people who run the Oryx website and who were also the source for this Economist bullshit: