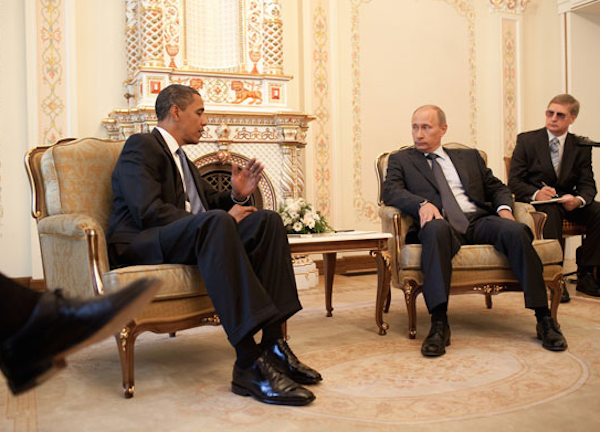 Propaganda Of Empire, US & Allies Hypocrisy On Ukraine

For a man who had taken a stunning electoral blow two weeks earlier, Barack Obama completed his Asian trip with an air of unperturbed leadership of the world—whatever the Republicans at home thought about who was in charge of what now will happen in the United States

The nation and its politicians have since the Cold War been so confident of American supremacy over the whole of Western civilization that not only allies have ceased to count but enemies. Americans are the leaders who make the decisions on how the world should work, even when this clearly is not what experience teaches, as one might think had been learned in recent years in the Middle East and Afghanistan.

The president signed a carbon emissions agreement with China. He went to Myanmar hoping to bestow a gold star for merit on Aung San Suu Kyi but found it necessary to chide the generals in power in the country that they must do better in matters of human rights—at a moment when a scandalous forced expulsion of a Burmese Muslim minority was taking place. Another time for Madame Aung San Suu Kyi.

In Brisbane for the G20 discussions, the president oversaw David Cameron of Britain (who has become the new Tony Blair) reiterating the State Department script, and issuing a lordly warning to Vladimir Putin that he must do as he is told concerning Ukraine or there will be still more sanctions.

Stephen Harper, the Canadian Prime Minister, presented to the Russian president, insulted him by saying: “I guess I’ll shake your hand but I have only one thing to say to you. You need to get out of Ukraine.” The other members of what in espionage circles are known as the Five Ears (not a new band, but the U.S., U.K., Canada, New Zealand and Australia) gave a version of the same speech. Mr. Obama was pleased. Stars for all!

President Obama’s final words to Mr. Putin set the pattern for hypocrisy: “(We are) very firm on the need to uphold core international principles, and one of those principles is you don’t invade other countries or finance proxies … to break up a country that has mechanisms for democratic elections.”

Is it possible that no one in his own government has yet worked up the courage to tell Mr. Obama that it was his own United States State Department that arranged a public uprising in Kiev last February, against a democratically elected (if corrupt) president of Ukraine, and sponsored the coup d’etat that made Arseniy Yatsenyuk (known as “Yats” in the department) prime minister? The Washington-sponsored coup occurred before there were any Russian troops in Ukraine, and before either government had as yet dreamed that Mr. Putin would annex Crimea in retaliation.

Obama, had he wished, could have read the whole story of the affair in a recent issue of the journal Foreign Affairs, written by the noted historian John Mearsheimer of the University of Chicago, or by Princeton’s Russia expert Stephen Cohen in other current publications.

Or he could have read an interview, published on the website TheRealNews.com Nov. 9, with Ray McGovern, a retired 27-year CIA veteran, who was the agency’s presidential daily briefer during the Reagan and George H.W. Bush administrations. McGovern explained how the affair was initiated at the NATO meeting in Bucharest in April 2008, which resolved to make Ukraine and Georgia NATO members (despite assurances to the contrary given by two American presidents; the Georgia attempt was made but failed in 2008). The president could even have read the inside story in this column, but I am certain did not.

As the West European members of NATO surely gave their agreement to this secret effort to overthrow and replace the Ukrainian government, it strikes me as not only hypocritical but dishonorable for them to have continued at Brisbane to berate Vladimir Putin for Russia’s supposed aggression against Ukraine.

Fortunately, many of the other Europeans, led by Angela Merkel, seemed aware of the story behind the Ukraine affair, and dealt with Vladimir Putin as if they preferred peace with Russia rather than war.

The host himself, Australian Prime Minister Tony Abbott, greeted the Russian president with the accusation that he was attempting “to recreate the lost glories of czarism or of the Soviet Union.” On his departure, Mr. Putin replied that Prime Minister Abbott had been “an excellent moderator and professional partner,” and thanked the people of Brisbane for “having welcomed him with such hospitality.”

Unfortunately, too many NATO members in Brisbane seemed to share what Dimitri K. Simes of the Center for the National Interest in Washington and Robert Blackwill of the Council on Foreign Relations say is the mood in Washington: to treat the Russian leader as if he were Slobodan Milosevic, Saddam Hussein or Moammar Gadhafi. Writing in the issue of The National Interest just out, the authors recognize that the crisis in Ukraine must be resolved in a manner that respects the dignity and national concerns and interests of both sides. Hasn’t anyone told Barack Obama?