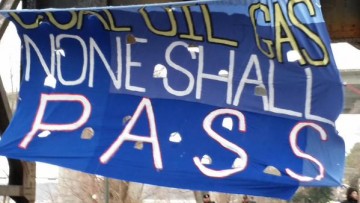 Following a previous lawsuit just a few weeks ago, a second decision on property rights and how they affect the planned Atlantic Coast Pipeline is in the hands of a federal judge.

On Thursday, U.S. District Court Judge Michael Urbanski heard arguments in Harrisonburg from both sides in a dispute over whether a utility company’s workers have the right to survey someone’s land.

Churchville resident William Little II filed a two-part lawsuit against Dominion Resources, arguing that the gas company would be trespassing on his property if it came to do a survey of his land for the proposed pipeline route. He also argued that a Virginia statute related to natural gas companies should be declared unconstitutional.

In response, Dominion filed a motion to dismiss the case, which is what Urbanski heard arguments both for and against on Thursday.

The hearing began with opening arguments by John Wilburn, one of the attorneys representing Dominion, who first addressed Little’s claims of trespassing and described them as the “easiest to dismiss.” He argued that the statute gives public utilities permission to enter private property and it would not be considered trespassing if the company follows the rules spelled out by the statute.

Wilburn then went on to address Little’s argument that the statute is unconstitutional because the language is too vague. Little argued that the words “request” and “permission” imply that a landowner should be able to refuse the gas company’s involvement on their land, but Wilburn said this allows the company to have a conversation with the landowner.

Little co-represented himself, alongside Richmond-based attorney Nicholas Hurston, and both argued that Dominion employees would be trespassing on his property because he denied their “request.” Little said he and his wife, Wendy Little, had not yet discovered anyone from Dominion “trespassing” on their property, but said that the 5 acres of land is heavily wooded in places, making visibility difficult.

Judge Urbanski reminded Hurston and Little that it would not be classified as trespassing as long as Dominion follows the rules spelled out by the statute. At that point, Hurston steered the argument’s focus back to the wording of the statute and said that Dominion never “requested” access, they just gave Little a notice.

Hurston said he was not arguing that gas companies shouldn’t be prevented from coming onto private property without permission — just if the permission is explicitly denied, as in Little’s case. When Little received the notice from Dominion, he said he replied with a firm “no.”

Urbanski interrupted the argument to remind Hurston that the statute tells gas companies that if permission is not given, the company is required to give the landowner notice before entering the property anyway.

Virginia Attorney General Mark Herring filed an intervener brief in defense of the survey statute. When two parties debate the constitutionality of a state law in federal court, the state must be notified so it can decide whether to intervene and defend the state law.

Virginia Solicitor General Stuart Raphael represented the state and agreed with Dominion’s arguments. He said that the statute in question is constitutional and that the wording is not too vague or ambiguous.

He argued that the rules the statute lays out are perfectly clear: Public utilities have a right to go on private property, even if the owner does not want them there.

He also defended the use of the word “request” and attempted to clarify the meaning behind it. In this case, he said, the word “request” is simply a nicer way of saying “notice.” The utility company is simply giving a landowner a heads up as a courtesy, but by law, the company’s employees are allowed to enter the property.

“We’re polite in Virginia,” Raphael said. “We call it a request, but it doesn’t mean you can ignore it.”

Urbanski decided not to make an immediate decision. Instead, he told the parties he would address both points of Little’s argument in a single written opinion.

“I understand both of the arguments,” he told the court. “It’s an issue of great importance to a lot of people, and I understand that.”