Above Photo: Donnie Anderson, a Los Angeles medical cultivator, retailer and co-owner of Western Caregivers dispensary poses at one of his dispensary’s in Los Angeles., Nov. 3, 2017. (AP/Richard Vogel)

For decades, the War on Drugs has operated disproportionately to undercut the economic and citizenship status of U.S. minorities. In giving priority to that war’s victims when it comes to applying for licenses to sell now-legalized marijuana, the LA City Council is helping to right a long-standing wrong.

LOS ANGELES – Beginning in January in Los Angeles, individuals who are low-income and/or have had a conviction for a marijuana-related offense will enjoy priority status when it comes to applying for a license to legally sell the herb.

Cultivators or manufacturers will also have such status, thanks to the Los Angeles City Council.  On Wednesday the council voted to repeal a four-year-old ban on such businesses in the city, and that repeal is accompanied by what supporters are saying is the most aggressive and progressive “social equity” clause in the nation. In the movement to decriminalize marijuana, attempts to apply “social equity” standards to cannabis have been talked about but have not made much progress.

The “official” War on Drugs – which began under President Richard Nixon but was expanded under President Bill Clinton – has ensnared millions of black men and boys in particular in the criminal justice system for marijuana possession, either for personal use or for distribution.

Since 2012, eight states and the District of Columbia have made recreational marijuana legal. A cannabis industry is now flourishing in the wake of these legislative changes. Los Angeles City Council President Herb Wesson says that the “social equity” component is a way to “correct a wrong” — that wrong being the damage done to Black and Brown communities in Los Angeles (as well as nationally) as a result of the drug war.

The other “wrong” being corrected is the exclusion of many black and brown individuals from being able to participate in the legal cannabis industry because of past marijuana-related convictions. Michelle Alexander, the author of the book The New Jim Crow: Mass Incarceration in the Age of Colorblindness, was among the first to raise this issue approximately four years ago, two years after Colorado became the first state to legalize cannabis for recreational use:

Marijuana sales in Colorado topped $1 billion dollars through August of this year, which was two months earlier than last year.

Alexander argues in her book that a “new caste system” was created by the War on Drugs. Individuals with drug convictions on their records are legally discriminated against in housing, employment, education, in some cases the right to vote, and public benefits.

According to the American Civil Liberties Union, there were 8.2 million marijuana-related arrests from 2001-2010. Although Blacks and Whites use marijuana at roughly the same rate, Blacks were nearly four times more likely than whites to be arrested for marijuana offenses. In places like D.C., Illinois, Iowa and Minnesota, Blacks were roughly eight times more likely to be arrested.

Repairing the cruel and ironic impact of disproportionate “justice” 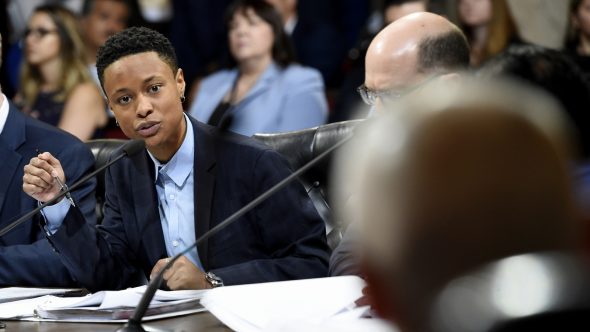 Job and housing applications routinely ask prospective renters and job-seekers whether they have ever been convicted of a crime, and federal legislation barring those convicted of drug crimes specifically from receiving benefits or educational assistance has created a vicious cycle of poverty and hopelessness.

Alexander was not only among the first to note the cruel irony of who stands to benefit from the lucrative legalization of cannabis; she also called for legalization as a means of reparations to “repair the damage” done to communities of color during the drug war. New York-based writer Arwa Mahdawi agrees.

Writing in The Guardian this past August, Mahdawi acknowledged that, while some believe there is a strong argument against reparations to African Americans for slavery (“those folks are long gone”), the argument against “marijuana reparations” is a lot flimsier:

Many of the people whose lives were ruined by disproportionately harsh punishment for petty drug crimes are still alive and suffering the consequences.”

Read the ACLU Report: The War On Marijuana In Black And White