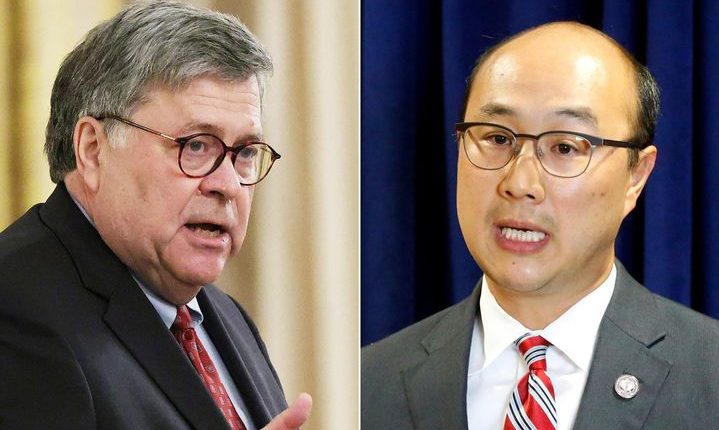 Above photo: Minnesota prosecutor John Choi, right, told Attorney General William Barr in a letter that he was quitting the Presidential Commission on Law Enforcement and the Administration of Justice. Getty/AP.

John Choi is worried the group is intent on “providing cover” for a predetermined law-and-order agenda that “will only widen the divisions in our nation.”

An elected prosecutor who took a role in Donald Trump’s presidential commission on law enforcement has resigned, telling Attorney General William Barr that he is concerned the commission was “intent on providing cover for a predetermined agenda that ignores the lessons of the past” and will issue a final report that “will only widen the divisions in our nation.”

Trump formed the Presidential Commission on Law Enforcement and the Administration of Justice late last October, announcing its formation at the International Association of Chiefs of Police’s annual meeting. Trump’s order mandated that the commission issue a report within one year ― a deadline that falls just days ahead of the 2020 presidential election.

The commission is stacked with members of law enforcement, and the American Civil Liberties Union has questioned whether it is a “sham commission formed only for the purposes of advancing a ‘Thin Blue Line’ law and order agenda.”

John Choi, the elected prosecutor in Ramsey County, Minnesota, served as a member of the commission’s criminal justice system personnel intersection working group. But Choi, whose county includes the city of St. Paul, wrote in a letter to Barr that he was quitting his role on one of the commission’s 17 working groups because he worries the final report “will vilify local prosecutors who exercise their well settled prosecutorial discretion consistent with their community’s values and the interests of justice.”

The Justice Department struck back at Choi, with one official telling HuffPost that Choi didn’t really resign because the working groups had already completed their work. The two chairs of the working group ― former U.S. Attorney Jay Town and Cook County Judge William O’Brien ― also criticized Choi’s work in interviews with HuffPost. Town said Choi offered “very little in substance,” while O’Brien said his opinions “didn’t have a lot of depth.”

Choi wrote in his letter to Barr that he previously tried to communicate to the commission that it “needed to listen to those who have been negatively impacted by policing and the criminal justice system.” But he said it is now clear that engaging communities to help bridge the divide between communities and law enforcement “was never the intended goal.”

“Rather than examine how decades of over-policing in communities of color have created that deficit of trust, the Commission was instead encouraged to study ‘underenforcement’ of criminal laws and ‘refusals by State and local prosecutors to enforce laws or prosecute categories of crimes’,” Choi wrote.

“At the very beginning of this process, President Trump said the Commission would ‘have [the recommendations] soon because most of them know many of the answers before they begin.’ It is now patently obvious that he was correct ― that this process had no intention of engaging in a thoughtful and open analysis, but was intent on providing cover for a predetermined agenda that ignores the lessons of the past, furthering failed tough-on-crime policies that led to our current mass incarceration crisis and fueling divisions between our communities and our police officers,” Choi wrote.

Choi called the commission “a missed opportunity to seriously deliberate in regard to areas for improvement in law enforcement and develop thoughtful solutions to address longstanding problems in the criminal legal system.”

In an interview with HuffPost, Choi said he joined the commission working group with the hope that he’d be able to contribute to the dialogue by sharing his experiences with drug treatment courts and issues like ending cash bail (an issue, he said, that wasn’t necessarily “received very well by the commission.”)

Judge O’Brien, who differed with Choi on the issue of cash bail, said the commission gave Choi an opportunity to present language on cash bail to the rest of the working group, but he never did so.

Choi said that the commission never responded to a letter that he sent along with Wyandotte County District Attorney Mark A. Dupree Sr., the first Black district attorney in the state of Kansas. Their May 29 letter stated that there were just four locally elected prosecutors in any of the committee’s 17 different working groups, and among other concerns raised the issue that the final report might “seek to erode local prosecutorial discretion.” Barr has lashed out at progressive prosecutors, even as his own home county of Fairfax, Virginia elected one.

“We wanted to be able to advocate for including other voices to find a way that would be more unifying as opposed to dividing,” Choi said. “If the report is just going to take the perspective of the traditional law enforcement approach and ignore others, I think that’s going to be a huge missed opportunity. Because the way that the country is moving right now, I think that we’re questioning everything that’s been happening in the traditional law enforcement structure, as well as the way that the justice system operates.”

Choi said he was especially disturbed by the rhetoric of U.S. Attorney for the Eastern District for Pennsylvania William McSwain, who previously launched heated attacks at progressive Philadelphia District Attorney Larry Krasner. McSwain, in his testimony before the commission, claimed that progressive prosecutors promoted anti-law enforcement culture and disrespect for the rule of law.

“I’m just really passionate about prosecutorial discretion,” Choi said. “Every prosecutor who’s elected in America should have that discretion and they should have an obligation and responsibility to think about what their communities want and apply those policies. There’s nothing wrong with that.”

Town, the Trump-nominated former top federal prosecutor in the Northern District of Alabama and co-chair of Choi’s working group, said that he found it “fairly pretentious” for Choi to request to read the final version of the report before it was released.

Town also said that while he couldn’t say how diverse the commissioners’ views and experiences might be because he didn’t know all of them, he could say they took their work seriously.

“What I do know from my interaction with the commission is that the individual commissioners, unlike Choi, took their role on the commission very seriously and had genuine purpose in identifying ways in which our justice system might improve for every American,” he said.

Town, who praised Trump’s handling of law enforcement issues, said he didn’t think Choi was “a bad guy” despite differing from him politically.

“I just think he is seizing on a moment and doing so after literally offering very little in substance,” Town said.

Miriam Krinsky, a former federal prosecutor and the founder and executive director of the group Fair and Just Prosecution, said that Trump’s commission seems fixated on building trust in law enforcement without actually addressing the fundamental issues that have driven distrust in police, prosecutors, and court systems for years.

“In some ways the work of the commission is no surprise against that backdrop of an attorney general who insists there is no systemic racism, and that disparities in our criminal justice system are in no way the product of inherent or explicit bias,” Krinsky said.

Krinsky’s group helped organize the filing of a brief in a lawsuit by the NAACP Legal Defense and Education Fund challenging the commission’s process and membership.

“Trust won’t be rebuilt, and the justice system won’t regain legitimacy, if critical policing and prosecution policies are developed through a process that is not transparent, inclusive, and informed by a diverse set of viewpoints,” the briefing stated. (A hearing in the lawsuit is set for next week.)

“There’s a growing chorus of groups, of reports, and of people taking to the streets around those concerns,” Krinsky said. “But oddly, this commission and its guiding principles seem to be completely tone deaf to those issues.”

One of the chairs of that working group ― Essex County, Massachusetts, District Attorney Jonathan Bloggett ― has said that he believes that the progressive prosecutor movement is “being driven by slogans and cliches.” Bloggett recently got into a dispute with one of the nation’s best-known progressive prosecutors, Suffolk District Attorney Rachael Rollins, also of Massachusetts, after he and three other prosecutors tried to intervene in her case involving how new research on the brain development of young adults should impact sentencing.

The Trump commission’s final hearings focused on respect for law enforcement and featured police advocates pushing for even harsher laws against those who assault the police and prosecutors complaining about the progressive prosecutor movement. U.S. Attorney McGregor Scott of the Eastern District of California told the commission that progressive prosecutors placed “a higher value on the perpetrators of crime than on the victims of crime.”

One police advocate testified that he saw “a rise in the general disrespect for law enforcement among younger generations,” and pointed in part to search engine results.

“If you go online and search ‘disrespect for police’ there are literally over 17 million results,” testified Brian Marvel, the president of the Peace Officers Research Association of California. “I believe this points to larger societal issues in which no one is accountable for their actions.”

It’s unclear exactly when Trump’s commission will issue its report, but it is certain to come before the election and is likely to boost the president’s “law and order” campaign that feeds on Americans’ inaccurate perceptions about crime rates.

Trump’s commission took its name from another commission that issued a report on crime way back in 1967. That commission’s report, issued the year before Martin Luther King Jr. was assassinated, stated that crime “flourishes where the conditions of life are the worst, and that therefore the foundation of a national strategy against crime is an unremitting national effort for social justice.” The 53-year-old report said that the nation needed “forceful action” in the fields of housing, education, unemployment, welfare and health care.

“Reducing poverty, discrimination, ignorance, disease and urban blight, and the anger, cynicism or despair those conditions can inspire, is one great step toward reducing crime,” that report stated.

The nation, in large part, went a different way, with “law-and-order” politics dumping resources into systems of incarceration. Former Attorney General Nicholas deBelleville Katzenbach, who served as chairman of that first commission, later wrote in his 2008 memoir that the 1967 report “has been ignored by politicians in recent years, when the prevailing mood has insisted on more punishment as an answer ― longer sentences (often mandatory); more power to prosecutors and less to judges; fewer efforts at education, job training and rehabilitation; and huge increases in the number of prisons and the cost of internment.”

Katzenbach’s memoir included a warning about how “law and order” politics had impacted America.

“Not only does this approach demonstrably cost more,” the late Katzenbach wrote, “but it breeds more violence and more often than not leads to a brutality I cannot associate with a decent society.”