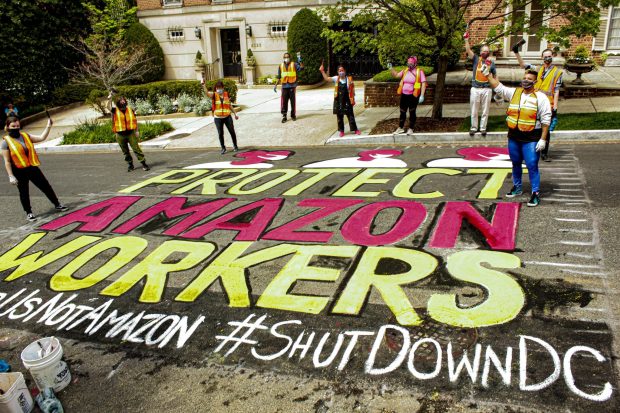 Protect Our Workers mural in front of Bezos DC home, April 29, 2020. From Shut Down DC

On April 29, 2020, a team of activists with La ColectiVA and ShutDownDC painted a mural on the street in front of Amazon CEO Jeff Bezos’ DC home. The mural read “PROTECT AMAZON WORKERS” in massive letters stretching from curb to curb.

The mural action was taken in solidarity with Amazon workers across the country who are being forced to endanger their health during the COVID-19 crisis.

“Whether it’s harming our environment or enabling ICE and police surveillance, corporations like Amazon are complicit in profiteering from practices that put us all, especially Black and brown communities, at risk,” said Danny Cendejas, an organizer with LaColectiVA and For Us Not Amazon. “We must hold corporations like Amazon accountable and demand our elected officials end corporate welfare so that our public resources can be available for community needs like housing, healthcare, and education.

This afternoon, advocates for healthy and safe working conditions in Amazon warehouses participated in an online town hall in which they called on Bezos to provide paid time off for illness, adequately clean warehouses, and end attacks on worker organizing. They were joined by environmental justice and racial justice activists.

Tech giant Amazon announced plans to place warehouse workers in an untenable position and endanger their health during the COVID-19 crisis; as a response worker strikes are expected later this week. Today, people who are fighting for justice at Amazon will hold a town hall online to discuss the health and labor violations occurring at warehouses across the country. An art installation will accompany the online event.

At 3PM today, frontline workers from Virginia, Illinois, California, New Jersey, among other states, will speak about the fight for basic worker protections at Amazon’s warehouses. The event follows numerous Amazon workers’ strikes; on April 21, hundreds of workers from more than 40 Amazon warehouses stayed home from work as part of a “sick-out” protest – the largest Amazon strike in history. On Friday, April 24, Amazon Employees for Climate Justice also held a massive sick-out.

“Corporations like Amazon have shown an equal disregard for workers, the community, and the environment,” said Roberto Clack, Associate Director of Warehouse Workers for Justice. Clack lives in Will County, Illinois, which is home to the largest warehouse cluster in the Midwest.  “This town hall will highlight the need for communities to come together for worker, community, and environmental rights, not just locally, but across the country.”

Today’s town hall is organized by ShutDownDC, La ColectiVA, and For Us Not Amazon, with speakers from the Athena Coalition, Warehouse Workers for Justice, the Sierra Club, Justice for Muslims Collective, and San Bernardino Airport Communities. It is part of the 10-day Earth Day To May Day event, which started on April 22, the 50th anniversary of Earth Day. Each day draws attention to local struggles for justice, communities that are sacrificed for fossil fuel extraction, and the essential workers who are the heroes of the COVID-19 pandemic.

Each day’s theme is as follows:

Tomorrow at 12 pm, ShutDownDC and partners will hold an online event to discuss the struggles against pipelines across the US. Register here.

On Friday, Earth Day To May Day will conclude with a moving protest through downtown DC to call for a People’s Bailout, with stops at the US Capitol and the White House. Activists will join by car, by bicycle, and on foot and practice appropriate physical distancing. The action will be livestreamed. More information is available here.

ShutDownDC is an alliance of people committed to an array of social justice issues, coming together to highlight the overlapping causes of the climate crisis in the United States. Across the issues of climate, race, immigration, inequality, and workers’ rights and against the backdrop of the COVID-19 pandemic, hundreds of activists are demanding a just, healthy, and sustainable world. On September 23, 2019, the alliance shut down rush-hour traffic in the nation’s capital with 2,000 people and 17 blockades at key intersections. The alliance demands transformative action on the climate crisis, while emphasizing the connection between climate change and other social issues including migration, war, race, and gender justice.