Protect The Vote And End Privatization Of The Postal Service

As we warned earlier in the year, the US Postal Service is failing due to a long term effort to weaken it plus the confluence of the COVID-19 pandemic, recession and intentional efforts by the Trump administration to suppress the vote.

Members of Congress and state leaders are starting to take notice because of the magnitude of the crisis and public outcry, particularly over valid concerns that mail-in voting will be disrupted. Now is the time to not only protect the vote but to end privatization and selling off of the US Postal Service and expand it as a critical public institution that provides high-quality jobs and services to all communities, rich and poor, urban and rural, across the country.

The Long Push to Dismantle and Privatize the Post Office

The Post Office is mandated in the Constitution (Article 1, Section 8, Clause 7). It is a critical service and a public good that has been provided to all people. With the passage of the 1981 budget, the US Postal Service was required to be self-funded from its revenues alone without support through taxes, which it was able to achieve until the pandemic. In fact, for more than 200 years, it has been solvent despite being the target of big banks and profiteers.

Ellen Brown describes the long history of the plan to dismantle and privatize the US Postal Service (USPS) going back to 1910 when the Postal Savings Bank Act was passed to provide a safer alternative for people after the banking crash of 1907. The big banks were upset by the competition from a postal bank. In 1966, the postal banks were dismantled after a series of laws were passed, beginning in the New Deal Era, which strengthened the private banks and gave them an advantage over postal banks.

Profiteers searching for more public entities to loot, as they have done with water, education, healthcare, and more have long viewed the Post Office as a fertile field for making money if they could weaken it enough so it would fail. A serious step in this direction was taken in 2006 with the so-called ‘Postal Accountability and Enhancement Act‘ (PAEA).

The PAEA was sponsored by two Republicans and two Democrats. It passed in the House with the full support of the Democrats (including Congressman Bernie Sanders, one Democrat abstained). Most of the Republicans supported it; twenty voted against it. It then went to the Senate where it passed with unanimous consent (a procedure used when Senators do not want to be held accountable for their vote).

A requirement of the PAEA is that the Postal Service must pre-fund all of its retirement funds including health benefits for the next 75 years (for people who have not been born yet). No business is required to go to this extreme and two-thirds of Fortune 1,000 businesses don’t pre-fund retirement at all. This costs the USPS over $5.5 billion each year. It is a way to “fatten the cow” for its eventual sell-off to private corporations.

One of the first impacts of the PAEA was that 65,000 postal workers lost their jobs in 2009. The USPS is one of the largest employers of African Americans in the US. This continued throughout the Obama administration as almost half of the postal processing plants were shuttered, local post offices had their hours reduced by 25 to 75% and 3,700 post offices were closed. The move to end Saturday mail delivery was attempted and stopped. A total of 150,000 postal workers lost their jobs under Obama and those who remained had their wages cut.

Under Obama, mail sorting and trucking were sub-contracted to private entities that pay their workers less. Activists began to protest in 2013 by delivering petitions and occupying post offices. In Berkeley, CA, people occupied the main post office for 33 days to prevent the historic New Deal Era building from being sold. This was part of a year-long successful campaign that gained tremendous public support, media attention, and support by local and state elected officials.

In 2015, A Grand Alliance to Save the Post Office, created by the four postal worker unions and other organizations, including Popular Resistance, formed under the leadership of APWU President Mark Dimondstein (Listen to our interview with him on Clearing the FOG in April). The Alliance lobbied Congress to repeal the 2006 PAEA and to stop the sell-off to private corporations.

The Alliance successfully organized to stop Staples from being allowed to provide USPS services. The campaign used protests outside Staples’ stores, a boycott of Staples, and a complaint filed with the National Labor Relations Board. A judge ruled in favor of the USPS in November of 2016 and Staples was ordered to shut down its postal services by March 2017. If Staples had been allowed to continue, it would have led to the closing of more post offices and the loss of more jobs.

The US Postal Service has continued to face the same struggles throughout the Trump administration. Despite a majority in the House and enough Senators to have power over the passage of any legislation in the Senate, the Democrats did not take steps to save the post office until it threatened their re-election in 2020.

The COVID-19 pandemic and recession created an emergency situation for the Post Office. The closing of businesses and record bankruptcies has meant a sharp decline in the quantity of mail. Postmaster General Megan Brennan started putting out the warning early in the year that the situation is dire and that the USPS could run out of funds during the summer. The Postal Service board of governors asked Congress for a $75 billion rescue package that would provide $25 billion in immediate funds and the rest as credit and financing for modernization projects.

Instead, the CARES Act, passed in late March, provided a measly $10 billion, which has been held up by the Trump administration and used to pressure the board of governors to elect Louis DeJoy as the new Postmaster General in June. On March 30, President Trump said on FOX if there was a high voter turnout “you’d never have a Republican elected in this country again.” Trump was explaining why he opposed more money being spent to help states conduct the 2020 election during the pandemic.

The Democrats offered $25 billion in aid and relief of the yearly $5.5 billion in retirement funds in their House version of the bill but did not use their power in the Senate to demand relief for the USPS. Meanwhile, Amazon received tens of millions of dollars in support of its private delivery providers through the Payroll Protection Program for small businesses.

A new Institute for Policy Studies report found that when cuts are made to the USPS, it is rural communities that are hit the hardest. Rural residents rely on the postal service for medication deliveries, bill paying (because they often do not have internet access), and voting (because many don’t have polling places). Private delivery companies like Amazon and FedEx won’t deliver to rural areas and use the USPS to do it for them instead.

Under the new Postmaster General DeJoy, changes have been made that are slowing down mail service and delaying the delivery of medications and other necessities. Almost 700 mail sorting machines were removed and people showed photos on social media of blue mail receptacles being taken away in trucks. On Friday night, top executives in the Postal Service were fired or reassigned. This sparked a large ‘noise demonstration‘ early Saturday morning outside Louis DeJoy’s home in Washington, DC.

President Trump made it clear last week that his actions are intended to suppress the vote in the November election. There is a large push for universal mail-in voting because of the pandemic. People are reluctant to vote in person and states are having trouble finding people willing to work the polls. Although President Trump requested an absentee ballot for himself in Florida, he said that mail-in voting is subject to fraud and can only be trusted in Republican states. He denied a request for emergency aid for universal mail-in voting saying, “They want $3.5bn for something that will turn out to be fraudulent. That’s election money, basically.”

States are reporting that they’ve received letters from the Postal Service saying they will not be able to handle the influx of mail-in ballots in a timely manner. AP News reports 46 states plus Washington, DC are impacted by this and millions of voters will be disenfranchised if action is not taken.

This has gotten the Democrat’s attention and they are now planning to hold an emergency meeting on Monday. They have also scheduled a hearing for when they return to work in September to bring Louis DeJoy in for questioning. Some members of Congress are calling for DeJoy to resign.

It is important to acknowledge that while lawmakers are upset now with the attack on the US Postal Service, this is likely because it is an election year. The Post Office is the most popular government institution so this stance is not only favorable to voters but it also protects the election. Both major parties are responsible for the situation that exists today and, after the election, they will likely return to their previous apathetic positions.

Saving the post office requires a popular movement with a vision of what needs to happen and mobilization to support that vision. The protest at DeJoy’s house was a good one, but it is the bipartisan Postal Service board of governors who have the power to remove Dejoy and Congress that has the power to provide financial support.

The steps that are required to save the US Postal Service over the short term include:

Then, over the longer term, steps include:

We wrote about future possibilities for the USPS in 2013, “Don’t Shrink the US Postal Service; Expand it.”

A Grand Alliance to Save the Postal Service is holding a meeting on Tuesday that we will attend and report back actions. For now, you can join the US Mail Not for Sale campaign here. And you can contact your members of Congress (look up their websites) and the members of the USPS board of governors, see below: 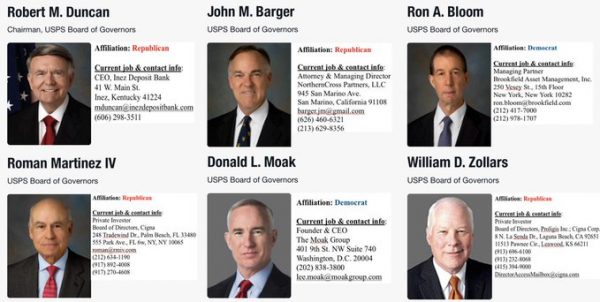