Protection Of Venezuelan Embassy Continues, Opposition To US Coup Builds

By Kevin Zeese and Margaret Flowers, Popular Resistance
May 26, 2019
| Newsletter
Protection Of Venezuelan Embassy Continues, Opposition To US Coup Builds2019-05-262019-05-26https://popularresistance-uploads.s3.amazonaws.com/uploads/2017/12/popres-shorter.pngPopularResistance.Orghttps://popularresistance-uploads.s3.amazonaws.com/uploads/2019/05/1answermarch-e1558896394259.jpg200px200px

While the final four inside members of the Embassy Protection Collective were arrested on May 16, 2019 (and released the next day), the Collective’s efforts to protect the Venezuelan Embassy in Washington, DC and to end the US coup continue. 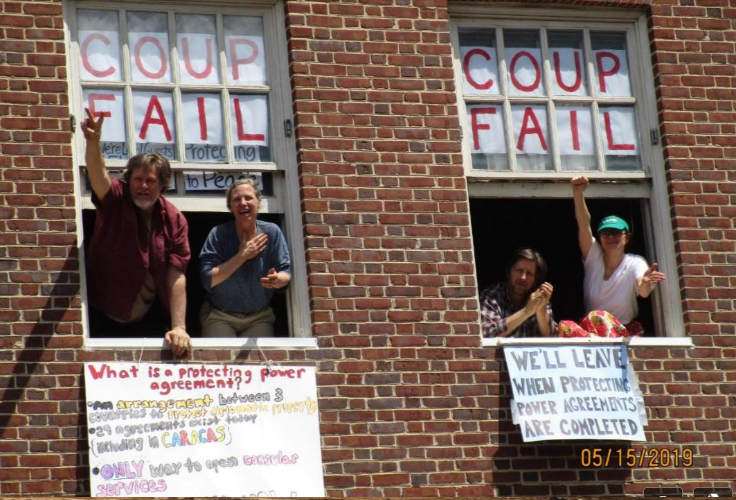 From left to right: Kevin Zeese,  Margaret Flowers, David Paul and Adrienne Pine at windows of the Venezuelan Embassy. Signs below them call for a mutual Protecting Power Agreement.

Tell the State Department to recognize Turkey as the Venezuelan Embassy’s Protecting Power in Washington, DC.

Protecting Power Agreements have existed since the time of Genghis Khan and have been embedded in international law since the 1870s. Currently they are enshrined in Article 45 of the Vienna Convention on Diplomatic Relations of 1961. They are used when diplomatic relations have been broken in order to protect foreign embassies. Twenty-nine Protecting Power Agreements are currently in place around the world.

When the United States government illegally invaded the Venezuelan Embassy to arrest and evict us, it violated the Vienna Convention and put all embassies around the world at risk. Federal agents assaulted the embassy with a battering ram and more than 100 officers, many armed with para-military gear even though we said we would not resist arrest or barricade ourselves in the embassy. This was after the US had illegally turned off electricity and water to the embassy and allowed a mob of coup supporters to assault the embassy and Embassy Protectors.

The violation of the Vienna Convention, a precedent set by the Trump administration, puts US embassy personnel and embassies at risk around the world. The Trump administration added to that violation of international law on May 24 when it allowed the fictional ambassador, Carlos Vecchio, of a failed US coup, to enter the embassy. This complicates negotiations for a mutual Protecting Power Agreement as the members of the coup will have to be removed from the embassy, but we still must urge the US to follow international law rather than be a rogue state.

Activists used light projection on the embassy to tell the truth about Vecchio as a fake ambassador who cannot do anything official such as issuing visas or passports but who will use the embassy as a coup-plotting center, further escalating US violations of international law.

Anti-coup protesters @JasonRCharter and @backboneprog project messages onto the former Venezuelan embassy which was illegally seized by US authorities.

This is not an embassy

Take Action Now: Join us in telling the State Department to recognize Turkey as the Venezuelan Embassy Protecting Power 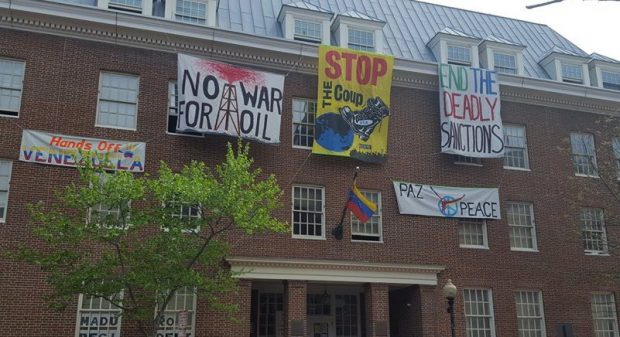 The Venezuelan Embassy with signs on it urging peace with Venezuela, end of the US coup and an end to sanctions.

The Embassy Protectors arrested inside and outside will continue to defend themselves in court. The next hearing of the four inside Embassy Protectors has been moved to this Friday, May 31 at 9:30 am before the chief judge of the US District Court in Washington, DC, Judge Beryl A. Howell.  Ironically, as we were serving as interim embassy protectors with the permission of the democratically-elected Venezuelan government, the four were charged with violation of 18 U.S. Code §”118. “Interference with certain protective functions.” Anyone who followed the activities during the Embassy Protection Collective’s actions can see the State Department was failing to protect the embassy as it allowed pro-coup advocates to break windows and doors, break and enter into the building, deface the building and assault people outside the building while threatening those inside the building.

Other Embassy Protectors arrested outside for trying to get food and supplies into the embassy are also facing charges, including “hurling missiles at a building” (bread and cucumbers) and assault, even though they were the ones assaulted. There are currently four outside Embassy Protectors facing charges. One, an older man bringing toothbrushes, has already had the charges dropped.

In addition to these actions, we are escalating our efforts to stop the US coup and protect the embassy. We are working with other peace and justice advocates to organized national and international days of action to protect the embassies, stop the US coup attempt and end the illegal unilateral coercive measures (misnamed sanctions) and threats of military attacks on Venezuela. If you live in a country that recognizes the coup leader, Juan Guaido, we urge you to take action to protect the Venezuelan Embassy in your country and to pressure your government to recognize the democratically-elected President Nicolas Maduro.

We will be posting these actions called by Popular Resistance and other organizations on our website. Sign up for our daily digest (on the front page of PopularResisance.org) to be sure to receive the information quickly.

Popular Resistance and other organizers will tie the US actions against Venezuela to the threats of war and ongoing unilateral coercive measures against Iran and other countries as well as the never-ending war in Afghanistan and the Middle East and threats to countries like Nicaragua and Cuba. In the next decade, as US empire crumbles, this coup attempt against Venezuela and the actions of US citizens against the US coup will be seen as one of the events that led to the demise of US military domination.

We along with numerous other organizations are organizing toward a national mass mobilization in New York City on September 21 when the United Nations General Assembly is meeting. We are calling it “The People’s Mobilization to Stop the US War Machine.” It will bring tens of thousands of people together to call for the end of the US coup against Venezuela and stop regime change operations anywhere in the world. It will also oppose unilateral coercive mentions (sanctions), which the US is using against many countries and that violate the UN Charter and other international laws.

They’re calling it “The People’s Mobilization to Stop the US War Machine.” pic.twitter.com/XF6gkJmw4m

Mark your calendar now for the national mass mobilization in New York City on September 21, the International Day of Peace, when the United Nations General Assembly is meeting.

The mass mobilization is challenging the “US War Machine” because the machine is more than just war and regime change, it has escalated militarism at home creating violence and death in black and brown communities at the hands of militarized police. US militarism is also a major cause of the climate crisis as the Pentagon is a major source for climate gases and fights wars for oil when we need to break our addiction to oil. And the war machine robs the United States of necessary funds for health, education, housing, and other necessities of the people as well as the funds needed to put in place an eco-socialist Green New Deal that confronts the climate crisis with a rapid transition to 100% clean, renewable energy within the next decade. Challenging the US war machine links many issues and causes.

If people are organized and mobilized, we can make these issues central to the political narrative in the United States and ensure that in the upcoming election cycle no legitimate candidate can support the US coup in Venezuela and must put forward plans to end US militarism.