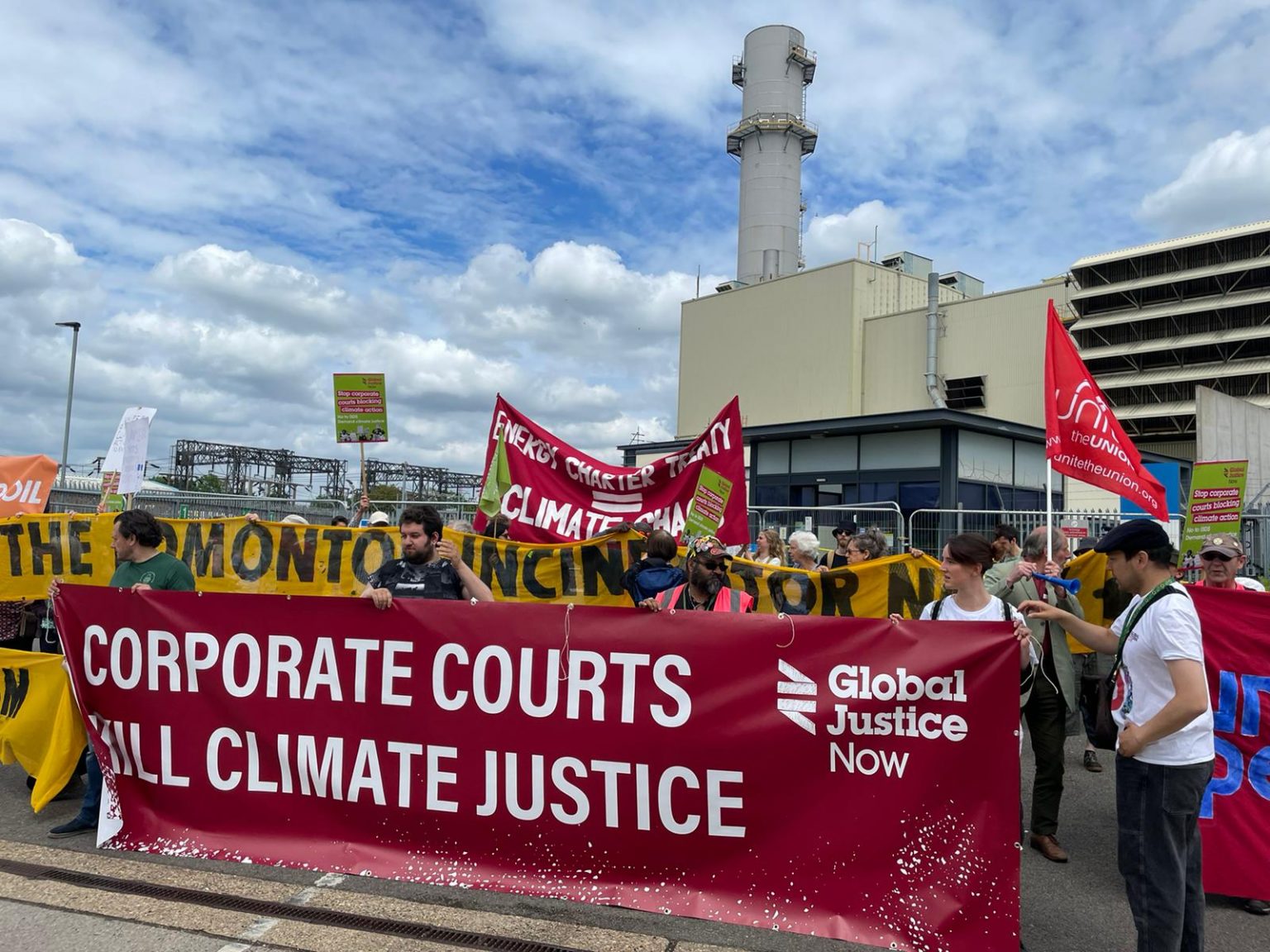 Above Photo: The protest outside Enfield Power Station on Saturday.

Environmental campaigners staged a protest outside Enfield Power Station against what they claim is an “attack on democracy” by the site’s owners.

Global Justice Now activists marched to the energy plant in Brimsdown as part of a national day of action against fossil fuel companies driving up climate costs.

Enfield Power Station is owned by German company Uniper, which is currently taking legal action again the Dutch government over its decision to phase out coal burning by 2030. Uniper opened a coal plant in the Netherlands in 2015 and is demanding compensation for the revenues it will lose from closing it, reported to be £774million.

Energy companies are able to seek such compensation under an international agreement called the Energy Charter Treaty, to which the UK is signed up. But campaigners warn the UK faces up to £11billion of similar claims as it takes the necessary action to meet its climate goals, agreed at the Cop 26 climate talks in Glasgow last year.

Jean Blaylock, trade campaign manager at Global Justice Now, said: “The fossil fuel industry is already doing everything in its power to delay and deter climate action, and we have lost too much time already to this glacial pace.

“It cannot be right for big polluters like Uniper to get massive payouts simply because governments are making the necessary decisions to tackle the climate crisis. The costs of this greed will ultimately be passed on to ordinary people.

“Uniper is holding the Dutch government to ransom, and that’s what we fear will happen to the UK if it fails to withdraw from the Energy Charter Treaty.”

Global Justice Now’s protest was supported by a range of groups, including local campaigns such as Stop the Edmonton Incinerator Now and Enfield and Haringey Cop 26 Coalition.

Protests took place around the UK on Saturday to demand the UK withdraws from the Energy Charter Treaty. The most recent United Nations Intergovernmental Panel on Climate Change report warns of a “regulatory chill” from such climate legal claims, specifically mentioning the Energy Charter Treaty and highlighting the risk of fossil fuel corporations using this to “block” the phase-out of fossil fuels by making the transition unaffordable.

Previously owned by Eon, Enfield Power Station is a gas-fired plant originally opened in 1999. It was bought by Uniper in 2016 and is one of seven power stations the company owns and operates in the UK.