Above photo: Protestors outside the Brazilian embassy, London. 23/08/19Euronews Living

Environmental activist group Extinction Rebellion has organised a protest outside London’s Brazilian embassy at short notice in response to the burning of the Amazon.

Several hundred activists peacefully protested in front of the embassy as a public demonstration designed to put pressure on Brazilian president Jair Bolsonaro. In an Instagram post shared just yesterday, Extinction Rebellion, more commonly known as XR, posted a chilling animation of a burning pair of lungs with details of today’s event underneath.

“FRIDAY AT 11, YOUR NEAREST BRAZILIAN EMBASSY. We gather in outrage, in grief and in despair outside the Brazilian embassy tomorrow.”

📍FRIDAY AT 11⁣, YOUR NEAREST BRAZILIAN EMBASSY⁣⁣⁣ ⁣⁣⁣ We gather in outrage, in grief and in despair outside the Brazilian embassy tomorrow. ⁣⁣⁣ ⁣⁣⁣ The Amazon is literally on fire (going up in smoke?) and every inch that continues to burn takes us further away from any hope of sustaining life on this earth. The Amazon is fundamental to the life support systems of this planet and for us as humans. ⁣⁣⁣ ⁣⁣⁣ We cannot sit in silence while life on Earth is being destroyed. ⁣⁣⁣ ⁣⁣⁣ We need governments around the world to speak up against Brazilian President Jair Bolsonaro – and put pressure on him to STOP these devastating fires and PROTECT the Amazon. ⁣⁣ ⁣⁣⁣ This is not just the future of Brazil he is holding in the balance – it’s all of our future.⁣⁣⁣ ⁣⁣⁣ Bring yourselves, your drums, your voices. Let’s stand in solidarity with all those who suffer because of these fires. The indigenous peoples, their land, their homes, their way of life are being destroyed by this. ⁣⁣⁣ ⁣⁣⁣ It is time to act. ⁣⁣⁣ ⁣⁣⁣ #OurLungsAreOnFire⁣⁣⁣ #ActForAmazonia⁣⁣⁣ ⁣⁣⁣ VISIT OUR INSTAGRAM STORIES AND FOLLOW THE LINK TO OUR EVENT. CLICK ATTENDING AND SPREAD THE WORD. LET’S MAKE THIS ACTION GLOBAL. CONTACT YOUR LOCAL GROUPS TODAY. ⁣ Artwork by @melanie.johnsson

A post shared by Extinction Rebellion (@extinctionrebellion) on Aug 22, 2019 at 4:32am PDT

We went down to the Brazilian embassy in London and spoke to protestors about what they’re aiming to achieve. Campaigner Kaija Coates told us she thought it was important to attend protests rather than just “tweet and post about them on Instagram” as the crisis in the Amazon “is getting more and more pressing”. She went on to say that the setting of the Brazilian embassy was particularly important due to the need for government intervention.

“It exposes where corporate greed and capitalism meets environmental issues. It’s not just individuals’ responsibilities now, I think this is a real governmental issue.”

Saskia Martić, a 16-year-old school girl pictured here holding her poignant, maths-themed sign, spoke to Euronews Living. She told us how she had decided to become a campaigner after feeling she wasn’t learning enough about environmental issues in Geography at school, saying “I was just so angry about it”. 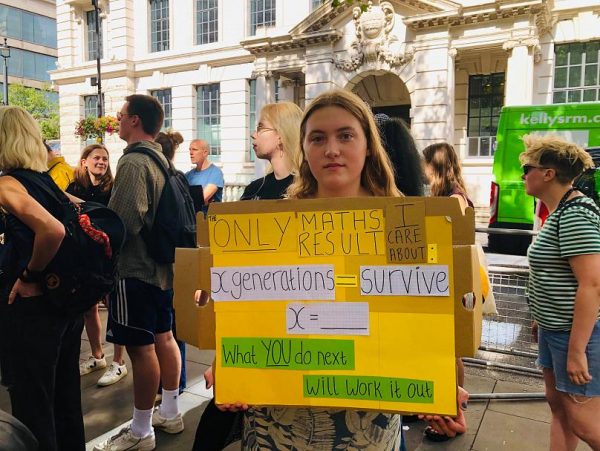 Saskia went on to tell us that she was inspired by Greta Thunberg and expressed her hopes for the future, after having collected her GCSE exam results just yesterday.

“I got my GCSE results yesterday and I was thinking, this isn’t the only result that is determining my future, it’s all this too. It seems inevitable that the world is going to end and we’re all going to combust into flames – but it’s really not. If we all made more of an effort, this doesn’t have to be our future.” 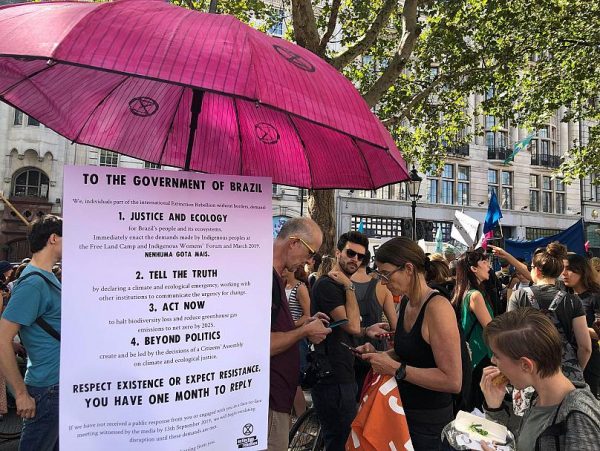 As the post and subsequent Facebook event: ‘Rebel for the Amazon: Our lungs are on fire’ suggested, the protest is not only taking place in London. Demonstrations are happening right now all around the world in Spain, Mexico, Norway, Chile, India, Germany, France, Austria and Argentina – according to the XR Instagram feed.

Numerous celebrities and public figures have been drawing attention to the Amazon wildfires, due to a lack of mainstream media coverage, by tweeting and posting on Instagram about it.