Protest Groups Uniting As ‘The Majority’ For Actions On May Day

Activist groups are uniting as a broader coalition they’ve dubbed “The Majority,” an idea inspired by the Movement for Black Lives — a collective of organizations in the Black Lives Matter movement — organizers first shared with Mic on Thursday.

More than 50 partners representing black, Latino, the indigenous, LGBTQ, refugees, immigrants, laborers and the poor will collaborate from April 4 through May 1, International Worker’s Day, when they’ll launch massive protests across the country.

The action will “go beyond moments of outrage, beyond narrow concepts of sanctuary, and beyond barriers between communities that have much at stake and so much in common,” The Majority states on its BeyondtheMoment.org website, which officially launches Thursday.

A screenshot of The Majority’s website, set to officially launch March 27
Source: Mic/BeyondTheMoment.org

“We will strike, rally and resist,” the coalition, which includes the Black Lives Matter Global Network, Black Youth Project 100, Color of Change and Mijente, among others, wrote on its website.

Leading up to Donald Trump’s inauguration, many U.S. activist groups worked in silos on strategies to resist the conservative political agenda that they agree is an existential threat to women, people of color, the LGBTQ community, immigrants and the environment. Trump’s first 100 days in office had been chocked full of executive orders, budgets and legislative proposals that go directly against what these activists have long been fighting for.

“Even though the election results showed one thing, the reality is that the majority of us are under attack and this is a moment for us to step into something together,” Navina Khanna, director of the Health, Environment, Agriculture, and Labor Food Alliance in Oakland, California, said in a phone interview. HEAL is a part of The Majority. “This is about really learning to see our issues as one, and our struggles as one.” 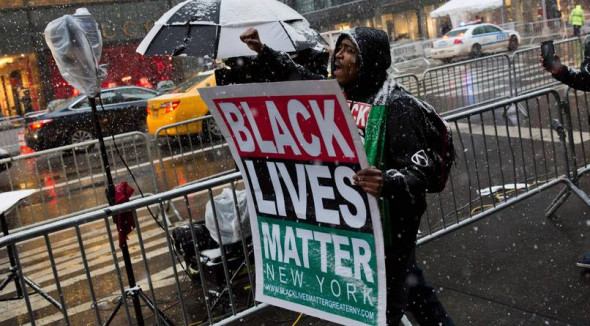 The “Beyond the Moment” initiative kicks off April 4 with “serious political education with our bases,” according to the website. In the weeks leading up to the mass mobilizations on May 1, they will hold public teach-ins and workshops nationwide. The desired outcome is a “broad intersectional, cross-sectoral” and influential unity on the left, activists said.

The idea for Beyond the Moment was derived from the Rev. Martin Luther King, Jr.’s “Beyond Vietnam” speech, in which he spoke out against racism, materialism and militarism — all broader and more-inclusive themes than his earlier anti-Jim Crow campaigns. The coalition said it chose April 4 as the kickoff for political education because that is date that King delivered the speech in 1967 and the date on which he was assassinated a year later.

Although anti-Trumpism has been a unifying cause — protests in major U.S. cities have occurred almost weekly around the Trump administration’s Muslim travel ban, Standing Rock policies and transgender rights rollback — The Majority said it wants supporters to think beyond this president.

“In the context of a new president using grandiose promises of job creation to mask the fundamentally anti-worker and pro-corporation nature of his policies, it is as important as ever that we put forth a true vision of economic justice, and worker justice, for all people,” the coalition website states.

March 27, 2017, 3:52 p.m. Eastern: This story has been updated to reflect that the launch of the website, BeyondTheMoment.org, has been pushed back to Thursday.