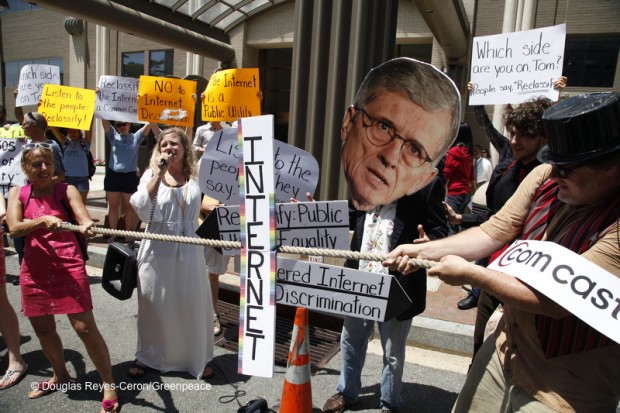 Protest Highlights Conflict Over The Future Of The Internet

Tom Wheeler, chair of the Federal Communications Commission, is at best confused and at worst intentionally saying one thing while doing another. Wheeler says that he doesn’t support a tiered Internet, but his rules would allow just that and would continue to result in more court challenges by the giant telecoms. Wheeler says that reclassification of the Internet wouldn’t protect net neutrality while the courts told him in January that it is the only way to guarantee it.

With just 2 weeks left for the public to take action, activists performed a musical in front of the FCC to demonstrate this disconnect and highlight Wheeler’s dilemma. The musical pitted The People who support reclassifying the Internet as a Common Carrier to make it like a public utility so that everyone has equal access against the Telecom Fat Cats (Comcast, Verizon and AT&T) who want to create a tiered Internet so they can charge more and control access to content.

Wheeler has a long career as a telecom lobbyist and served as president of the industry’s lobbying organization. Jon Oliver suggested that putting an industry man like Wheeler in charge of the Internet is like letting a dingo care for your baby. (For the record, Wheeler says that he is not a dingo).

But so far, Wheeler’s vague responses to questions in recent public events have been less than reassuring. And that is why activists brought the most important question right to Wheeler’s doorstep in the musical “Which Side Are You On, Tom?”

The action was timely with the window to submit a public comment closing.  Activists are encouraging people to take action now to determine the future of the Internet. (Comment here http://FCC.gov/Comments, proceeding #14-28).

The focus is on FCC Chair Tom Wheeler because he determines the direction of the FCC’s decision. Of the 5 commission members, 2 reject any regulations of the Internet and 2 seem to be leaning toward reclassification. Wheeler stands in the middle with his proposed rules.

The Internet was originally classified as a Common Carrier under Title II of the Federal Communications Act, but that was changed in 2002. This was the first step towards Internet discrimination and Wheeler’s proposal could start a slippery slope which makes the Internet like cable TV where people can only access what they can afford. However, Wheeler could go the other way and end Internet discrimination by reclassifying the Internet as a Common Carrier. This would give the FCC the authority to regulate the Internet in the public’s interest and to reinstate net neutrality rules.

Overwhelming public support is needed to overcome the power of the telecom and broadband providers. Over one hundred thousand have already commented but more are needed. Every comment makes a difference.

You have until July 15 to submit comments.

To comment, go to: http://FCC.gov/Comments, proceeding #14-28 and tell the FCC to reclassify the Internet as a common carrier so there can be equal access and no discrimination.

More coverage of the action:

This action was organized by:
Popular Resistance (http://www.PopularResistance.org)