Washington, DC–A free exhibit called “Protest Matters” was organized by a local anthropologist to showcase items used at protests and how they promote change for public benefit. Siobhán McGuirk, an adjunct professor at Georgetown University, assembled the exhibit from local activists’ contributions. A large collection of buttons, protest signs, pamphlets, political t-shirts and a puppet were on display to show what resistance looks like.

The “pop-up,” or temporary, museum consisted of hundreds of items important to activists’ personal experience in movements with their own description of their meaning. It was open to the public for three days at Potter’s House, a local coffee house, from Nov. 30 to Dec. 2. It’s now available for viewing online. Every item in the museum holds significance to its contributor and was created by those working directly on their causes. Many were handmade.

McGuirk envisioned the museum as an instructional tool to show that protest takes many forms, including prominent public demonstrations, street protests, blockades, sign drops, or personally worn items to make a point. There are also thousands of less visible forms of protest, such as boycotts or letter writing campaigns which can influence community change, she pointed out. Such protests can even be as simple as a teacher altering an established curriculum to include information students would otherwise not be exposed to.

Many forms of protest can’t be embodied by physical items, but they exist nonetheless, for example, a modern Underground Railroad for those seeking sanctuary from oppression or expulsion from a country. Other examples include Rosa Parks refusing to give up her seat on a bus or the Greensboro sit-in a “Whites Only” Woolworth’s lunch counter.

The Protest Matters museum was timed to coincide with a Society Anthropology for North America conference being held nearby in Washington. The theme was “Anthropology Matters,” so McGuirk thought of how to spotlight a subject on which anthropologists frequently focus: activists and their campaigns.

McGuirk said that despite steady and nearly full attention being given to the present administration, there is a just as much of a local discussion of politics but it is nearly absent from news coverage. “In DC, you’ll see stickers, flyers, posters, yard signs, murals and graffiti, and I think this canvas of debate is overlooked sometimes when people talk about politics in DC,” she said.

The museum name is a play on the dual meaning of the word “matters.” “Matter” can be both a physical observable entity or defined as “for a purpose.” For that reason, the public was invited to touch items where it was practical and to write on a board their thoughts about why protest matters to them. 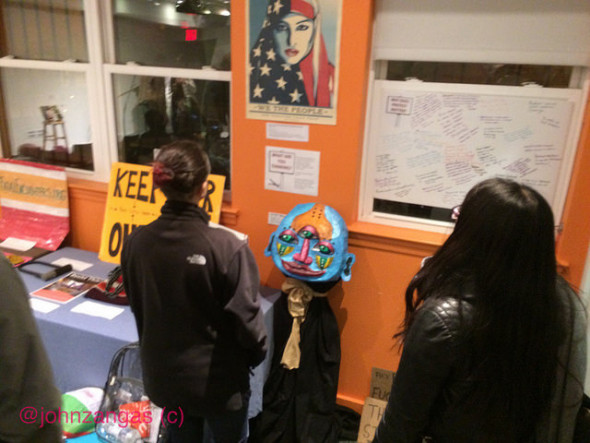 Bringing together a variety of the tokens of resistance and concentrating their meanings in one place, revealed the hidden capabilities of community collaborative efforts in fighting for causes. There was a wide spectrum of movements represented, including environmental, police oppression, surveillance, indigenous peoples rights, immigration, food, trade, women’s rights, the LGBTQ community, and much more.

A fabric banner which was carried for 7 days for the 100 Immigrant Women’s March, from Philadelphia to Washington, DC, was accompanied by its construction materials, including acetate stencils and painting tools. The march coincided with the Pope’s visit in 2015. “The act of cutting it out, spray painting and laying it out is building community and building power and it is why we included this,” said McGuirk. The march started at Liberty Park in Philadelphia and ended in McPherson Square.

Tools used to make displays would not typically be seen in a museum. “People don’t carry acetate with spray paint when they’re at a march, but keeping hold of that and saying this thing means a lot really shows the importance of process objects at protests,” McGuirk said.

A table display included printed materials used during the inauguration protests in January 2017. The “J20” display included hand flyers and song sheets used by participants during the protest. A ‘zine (a small hand made book of limited circulation) was printed by a collective of anonymous feminists who wrote about their visions and experiences of grassroots feminist efforts.

A puppet named “Mama Wit” made by artists at The Sanctuaries, depicted a woman with three large eyes, which symbolized the ability to have a heightened sense of awareness. The puppet was used in the national convergence of interfaith organizers as well as at a public action on public brutality. “Mama Wit” draws on the rich heritage of puppetry and humor in social movements, according to its placard.

A stencil poster entitled “Deporter In Chief” was spray painted black and white, depicting a silhouette of Obama with the caption “2 million deported,” drawing attention to the immigration issue as not just being a partisan issue but a human rights issue confronting both conservative and progressive political agendas. 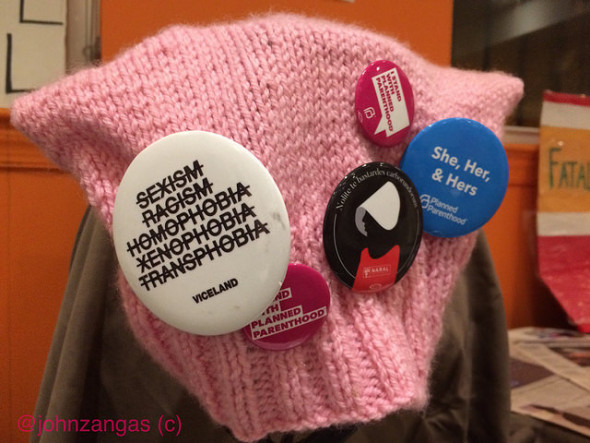 A “pussy hat” with buttons was submitted by a woman who went to the Woman’s March the day after Trump’s inauguration. There were environmental protest posters, stickers from an anti-fascist group, a giant “Resist” banner, and handmade one-of-a-kind signs. A cloth banner was signed by women of the Occupy Movement.

A signed copy of Howard Zinn’s book “A People’s History of The United States” was a personal item contributed by McGuirk herself. The book was a gift from an LGBTQ group of activists she previously worked with. “It’s got this personal touch,” she said as she thumbed through pages she had tabbed. “It reminds me that scholarship is important, but only if you make it important. You can’t just say, ‘I’m a historian and therefore I’m important’–that’s how Howard Zinn put it–you can’t just stand on a moving train.”

The Protest Matters museum is being digitally recorded and permanently displayed on a website at: http://ProtestMattersMuseum.wordpress.com